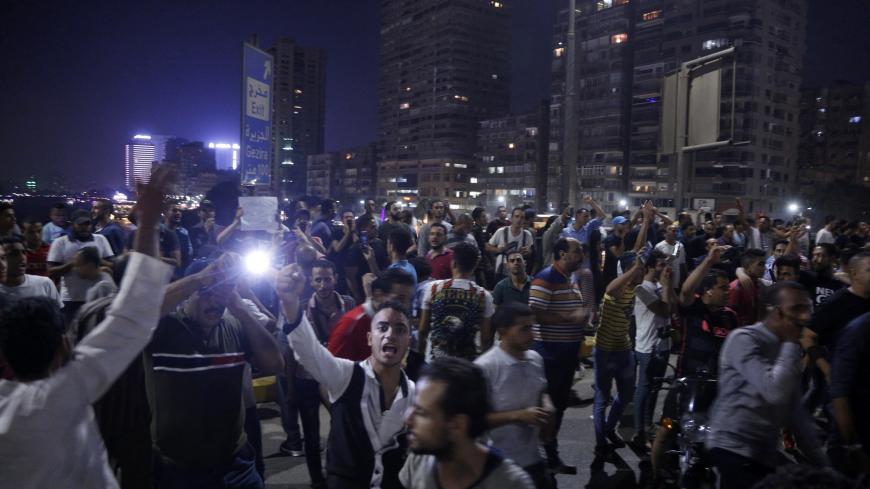 Egyptian protesters shout slogans as they take part in a protest calling for the removal of President Abdel Fattah al-Sisi in Cairo's downtown on Sept. 20, 2019. - STR/AFP/Getty Images

Egyptian security forces fired live ammunition and tear gas at hundreds of protesters in the Red Sea city of Suez on Saturday, one day after anti-corruption protests targeting President Abdel Fattah al-Sisi’s government sprung up in Cairo and several other cities. Police have since arrested more than 365 protesters as well as Mahienour el-Massry, a human rights lawyer who had sought to represent several of the anti-corruption demonstrators.

Despite Sisi’s crackdown on dissent, President Donald Trump greeted him at the UN General Assembly with effusive praise, calling him a “real leader” and dismissing the demonstrations against him. But the crackdown comes days after Sen. Lindsey Graham, R-S.C., a Trump ally who’s typically more skeptical of Sisi, walked back his multiyear effort to cut Egyptian military aid in a bid to pressure Cairo on its human rights record.

Graham chairs the Senate’s foreign aid panel, which allocated $1.3 billion in military aid to Egypt in its 2020 appropriations bill, released on Wednesday. Graham and the panel’s top Democrat, Sen. Patrick Leahy of Vermont, had previously sought to cut Egypt’s annual Foreign Military Financing (FMF) by $300 million in 2017 and 2018.

Their efforts were unsuccessful and ran afoul of House appropriators, who preferred to give Egypt the full $1.3 billion in FMF, roughly the same amount Cairo has received every year since the 1980s as a reward for its 1979 peace treaty with Israel. This year, Graham is siding with the House even as Leahy argues for military aid cuts.

“Emboldened by his friend in the White House, President Sisi has imprisoned and tortured his political opponents, cracked down on civil society and turned the media into his own cheerleading squad,” Leahy told Al-Monitor. “It is Congress’s responsibility to stand up for our values and for the Egyptian people. Unfortunately, the fiscal year 2020 Senate appropriations bill sends the wrong message by providing $1.3 billion for the Egyptian military.”

“It appears that Senator Graham wanted to ‘reward’ the Egyptian government for finally resolving the 2011 to 2013 convictions against mostly US-based NGOs,” said Andrew Miller, the deputy director for policy at the Project on Middle East Democracy, which supports cutting and conditioning Egyptian military aid. “But this step is close to the least the Egyptians could do to address US concerns as it carried no domestic political cost for President Sisi.”

Miller argued that “Graham is ignoring the many other actions Egypt has taken contrary to US interests over the last year, from imprisoning more American citizens to contributing to the further destabilization of Libya.” (Trump did note that the two leaders discussed Libya in their meeting today.)

The Senate spending bill also excludes a provision from the House foreign aid legislation that would withhold $13 million in FMF until Cairo compensates April Corley, a US citizen, for injuries she sustained when the Egyptian military repeatedly struck her tour group in the western desert in 2015.

Both bills would condition nearly $300 million in Egyptian military aid on progress related to democracy and human rights reforms. But unlike the House’s Corley provision, the secretary of state can release that aid with a national security waiver that both the Trump and Barack Obama administrations have routinely relied on since 2013.

The report accompanying the Senate bill does direct Secretary of State Mike Pompeo to “consider the cases” of three Egyptian detainees before issuing the next national security waiver: Mustafa Kassem, a US citizen detained in Egypt, as well as Ola al-Qaradawi and her husband, Hosam Khalaf. The couple’s daughter is also a US citizen and Qaradawi is the daughter of the Qatar-based imam, Yusuf al-Qaradawi. They were detained in 2017, shortly after Egypt joined the Saudi-led blockade against Qatar.

Pompeo used the national security waiver in August to release another $300 million in Egyptian FMF. But Pompeo’s justification to Congress — obtained by Al-Monitor — noted that Egypt “has continued to restrict unduly the right of peaceful assembly,” continues to imprison “as many as several thousand persons” for their political beliefs and has not taken steps to investigate extrajudicial killings.

And while Pompeo’s justification stated that Cairo has scaled back its military relationship with North Korea, it said Egypt continues to limit American officials’ access to the Sinai to observe how they are using US assistance.

The report accompanying the Senate bill does require Pompeo to assess whether Egypt is complying with end-use agreements for US military equipment in Sinai, ensuring that the weapons do not “come into the possession of individuals or groups that pose a threat to the United States,” and complying with “international human rights and humanitarian law.”

Egyptian Foreign Minister Sameh Shoukry told Al-Monitor in an interview this week that Cairo maintains contact with the White House and State Department “to clarify some of the misconceptions” in Pompeo’s national security justification to Congress.