Netanyahu to pass Ben-Gurion in time served, but not in stature

Israel’s first prime minister, David Ben-Gurion, and its incumbent prime minister, Benjamin Netanyahu, who will soon break the record set by the former as the country's longest-serving premier, represent opposing worldviews and aspirations. 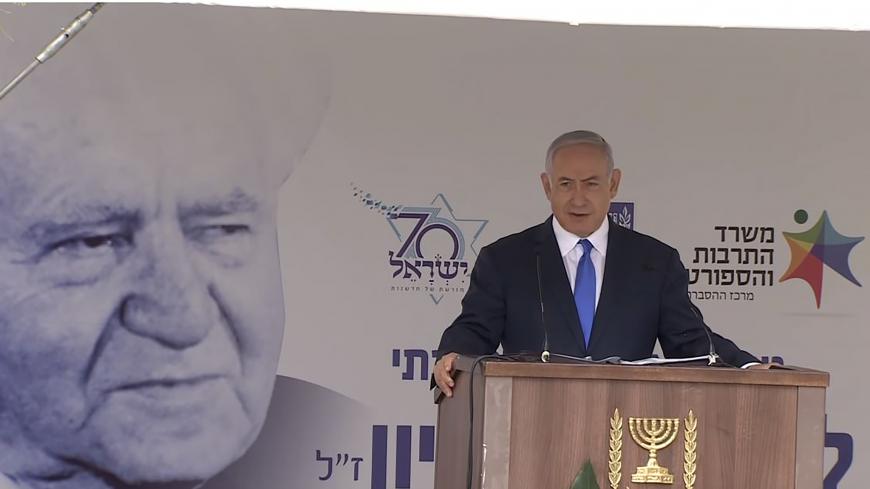 After Benjamin Netanyahu’s role as Israeli ambassador to the United Nations came to an end in 1988, he returned to Israel. Practically an unknown at the time, he convened a press conference to announce his decision to join the Likud and enter politics. The “Likud princes” — a group of young front-runners marked to lead Likud the “day after” Menachem Begin and Yitzhak Shamir — belittled the political neophyte. Ehud Olmert, Dan Meridor, Roni Milo and their friends didn’t really accept the strange bird with fluent English and an American accent who having come from the United States acted like he'd discovered the place. Most did not realize that they were about to confront the most elaborate, state-of-the art and lethal political machine in the history of modern Israeli politics.

The only one who identified the threat was Reuven Rivlin, a relatively minor Knesset member at the time but a long-term, experienced Beitar movement member. He warned the princes: Don’t underestimate this guy, Rivlin said. He’s here to stay, and he has come to eliminate you before you know what has hit you. The princes shook their heads in pity for Rivlin. Today, Rivlin can shake his head at them. Netanyahu has succeeded in removing everyone else from the Israeli political scene, President Reuven Rivlin being the exception.

If someone had told the the princes 31 years ago that Netanyahu would break David Ben-Gurion's record as Israel's longest-serving prime minister at 2,793 consecutive days, they would have responded with barely contained contempt. This month, the unthinkable came to pass.

All attempts to compare the two leaders lead to the same conclusion: Netanyahu and Ben-Gurion are total opposite: positive and negative, oil and water, black and white, different personalities, clashing worldviews, different political camps, vastly dissimilar modes of action. Ben-Gurion was the man who founded the state of Israel almost single-handedly, against all odds, through a rare combination of leadership, responsibility, courage and almost superhuman resolve. His actions were historic on a biblical level, putting an end to 2,000 years of Jewish exile with the determination and desperation of 600,000 Jews who returned to their homeland.

With regard to Netanyahu, one can’t predict how history will judge him. There is no constitutive event to ascribe to him. He hasn’t waged wars, brought peace, broken down boundaries or made historic decisions. What he did do was strengthen Israel’s security, guard the status quo with his life, sign agreements for the implementation of the Oslo Accords (the Hebron protocol) and kill them almost simultaneously, scratch negotiations with the Palestinians from the agenda and attempt to kill the two-state solution. He emphasized and alerted the world to the Iranian threat (but was not the first or only one to do so).

Ironically, the jury is still out on the Iran issue. Netanyahu may ultimately find that his actions served to promote Iranian nuclearization, rather than restrain it. On the other hand, for now, Netanyahu has managed to recruit President Donald Trump to his view of Iran. Trump brings with him the unique power of the United States, but the problem is that the Iranian ayatollahs are refusing to cooperate. Instead, Iran has reengaged in nuclearization by leaps and bounds.

At the end of the day, Netanyahu could find himself extolled as a hero or denigrated as a fool. He could have employed Israel’s military power against Iranian nuclearization, as Menachem Begin did in 1981 against Iraq and Ehud Olmert did in Syria in 2007, when they launched attacks to destroying nuclear reactors in those countries. In the critical years between 2010 and 2012, however, Netanyahu dilly-dallied and eventually gave up. Did he do the right thing? We’ll know in a few years.

Netanyahu is a pessimist. His right-wing ideology stems from what historians call the “eternal Jewish history of catastrophes,” not from a fiery love for the lumps of earth on the West Bank. He got that from his father, who got it from his father as well. He is suspicious of everyone. He’s the first to identify dangers, but will always blind himself to opportunities. Former Prime Minister and President Shimon Peres was Netanyahu's exact opposite. David Ben-Gurion is also counted among the list of incorrigible optimists, which includes most prominent Labor leaders, who did not hesitate to make difficult decisions, to stand down when necessary but also to fight when possible, to create facts on the ground and to even take risks.

If it had been up to the Netanyahu family, the State of Israel would never have happened. That is a fact. When Ben-Gurion deliberated over the UN partition plan, which would have granted the future Israeli state much less territory than it ultimately got, Professor Ben Zion Netanyahu organized the large group of revisionists that published advertisements in the New York Times in September 1947 calling on Ben-Gurion to say “No.” They wanted all or nothing. Some people say that this reminds them of the Palestinian's later behavior.

Luckily, Ben-Gurion ignored the right-wingers. He grasped that he faced a once-in-a-lifetime opportunity and decided to take the plunge, with 600,000 Jews, few weapons or firearms and numerous troubles. He realized that on the morning after the declaration of the state in May 1948, five Arab armies, would invade the nascent Israel, which would also have to confront attacks from local Palestinian fighters. Ben-Gurion knew that the odds were against him, but he also realized that this was the only chance he would get.

In 1952, Ben-Gurion decided to receive reparations from Germany. Again, the revisionists strongly opposed him. The national honor is at stake, they asserted. Accepting reparations would be akin to forgiving the Germans for the Holocaust. Ben-Gurion ignored them this time as well. He knew that German money would help him in building the state and fortifying it. This was more important than anything else and also constituted a kind of poetic justice: You destroyed us, now you will help build our state. Ben-Gurion went on to develop the nuclear reactor at Dimona and embarked on the Sinai campaign in 1956, conquering the peninsula, but was forced to withdraw shortly thereafter.

Ben-Gurion is the Israeli George Washington, but who is Netanyahu? His opponents call him the Israeli version of Donald Trump, but this is an exaggeration. Netanyahu is equipped with a toolbox that is shinier and more sophisticated than all his predecessors. He is smart, well educated, sharp witted and clever. Netanyahu is a mega-politician with charisma. He is also paranoid (though some of those he mistrusts do in fact persecute him). Under his watch, Israel’s economy improved greatly, its security has been maintained, and its diplomatic position has improved in the Middle East and around the world in general. The opportunities he passed up can be left for another time, along with the damage he has inflicted on Israel’s domestic fabric and society, his hedonistic lifestyle and his corruption and bills of indictment.

The bottom line is that Netanyahu succeeded in transforming himself into the modern version of the Jewish Messiah, the real “Mr. Security,” one of Israel’s most popular but also one of its most hated leaders in modern times. If one were to ask Netanyahu, he would say that Israel would be lost without him. He truly believes this. In his eyes, the country would fail without him at its helm. All that remains is to wait and see if he is right.