Israel is a Jewish state; get over it

The Israeli demand that Palestinians recognize the Jewish state does not contradict the two-state solution, but it exposes the Palestinian reluctance to consider the Jews as a people instead of a religion. 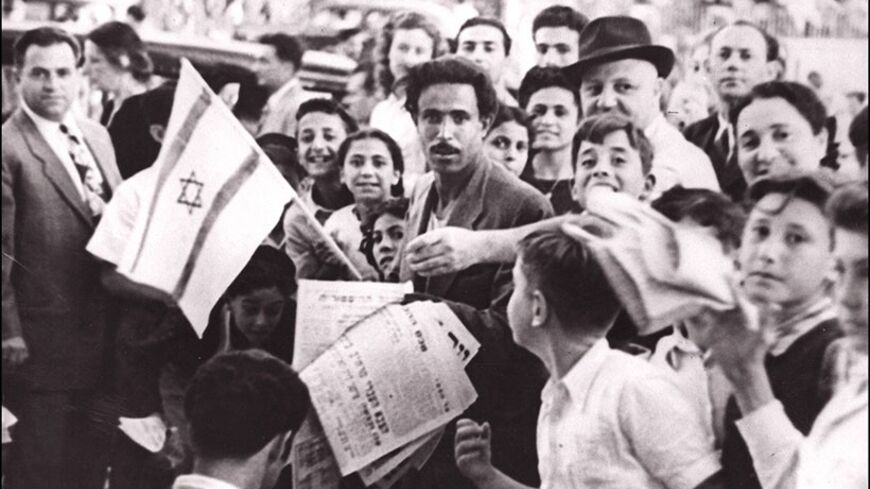 A crowd celebrates the proclamation of a new Jewish state of Israel, May 20, 1948. - AFP/Getty Images

On Israel’s independence day proclamation — May 14, 1948, (5 Iyar 5708) — the remaining Jewish-Roman community that survived the deportations to Auschwitz gathered near the Arch of Titus at the Forum Romanum, the ruins of the ancient city of Rome. For 2,000 years, Rome’s Jews refrained from passing under the arch that had been erected to commemorate the Roman victory over the Judean rebellion. But on May 14, 1948, they passed under the arch, coming from the opposite direction of the Roman victory march.

Symbolizing the victory over Judea’s rebels, the engraving in the Arch of Titus depicts the march of pillage and prisoners. In its center is a relief of the pillagers carrying on their shoulders the menorah (candelabra) from the Second Temple. The triumph of the Roman Empire over the rebellious people from Judea in 70 A.D. is symbolized by the menorah taken from the Temple.

The ancient Jewish people — an elusive mixture of matter and spirit, religion and nation — are embodied in the Temple menorah engraved in the Roman arch. This is the temple whose existence some Palestinians call into question. Two thousand years went by and the same menorah was chosen as the Jewish state’s emblem. It's a sign of the renewed covenant between the people and their ancient homeland. This is a people that rose like a phoenix from the crematoria in Auschwitz, building a model state in a relentless struggle.

The Jewish people are not like all other peoples. Rather, they are a nation sustaining tension within itself between the physical and the tangible and the metaphysical and spiritual. “The Torah is the legal underpinning of Jewish freedom and nationality.” These words were said not by David Ben-Gurion, Israel’s first prime minister, but by John Locke, the “father of classical liberalism.”

Proficient in Hebrew, Locke even dedicated the first half of his book “Two Treatises of Government” to political exegesis of the Pentateuch. His philosophical rival, Thomas Hobbes — also proficient in Hebrew — devoted more than 300 pages in his chef d’oeuvre “Leviathan” to the political doctrines in the Jewish Holy Scriptures. Some 200 years earlier, Niccolo Machiavelli, one of the greatest political thinkers, singled out the Jewish people as the first people in history.

And now, as Israeli Prime Minister Benjamin Netanyahu wants to pass the basic law of the Jewish nation-state — a law that will enshrine Israel as the state of the Jewish people — heaps of derision and rage are hurled at him.

Frankly, I rather enjoy reading the internal opposition to this, if only for the multiple contradictions in those counterarguments.

On the one hand, it's claimed that the law is not needed. A law that is all just an empty declaration over facts that are already known. On the other hand, it's argued that this law would discriminate against the Arab citizens of the State of Israel. Incidentally, and in all fairness, we are allowed to recall here that Netanyahu’s government adopted an affirmative action law specifically tailored to Arab civil servants. It also launched a campaign aimed at integrating Arabs in the private sector as well as another campaign against discrimination and racism.

Normally, laws are born because they are needed or because legislators think they are needed. Yet, some laws are in their essence symbolic and declarative such as the First Amendment to the US Constitution.

The prevailing assumption around the world is to regard the insistence of the Israeli government that the Palestinians recognize the Jewish state as a meaningless semantic game at best, or, at worst, an Israeli attempt to derail the peace process. These allegations are directed at Netanyahu.

Why not ask the Palestinians why they insist on something that supposedly is merely “semantic”? Why aren’t they willing to recognize the Jewish nation-state and ensnare Netanyahu in a trap he ostensibly laid? And what is really the problem?

After all, everyone accepts the two-state solution: Two states for two peoples. One is a recognized people — the Palestinian people. If so, what’s the problem recognizing the state of the other people? And who is that other people?

What we can deduce from this is that the refusal to recognize the State of Israel as the Jewish nation-state means the continuation of the conflict. It demonstrates the Palestinian inability to accept the fact that there will be no right of return into the State of Israel — otherwise this will bring about its end as a Jewish state.

The claim that is embraced by the non-Zionist left and the Palestinians is that the State of Israel belongs to its Jewish and Arab citizens alike, and this is the people that the Palestinians recognize. But can the Jewish and Arab citizens of the State of Israel be defined as one people, or as one nation sharing common values, common culture, common dreams and aspirations?

Israel’s Arab citizens define themselves as Palestinians. They feel part of the large Arab nation. This is the reason why as a national minority they are unwilling to serve in the military or carry out national service. On the other hand, we Jews feel much closer to our brethren in the Diaspora. Their fate is our fate. We may be paranoid, but sometimes even paranoids are in the right. After all, it was only 70 years ago that an attempt to annihilate us was made. Like rhinos, we Jews also need a nature reserve. We, too, deserve to survive.

Those seeking to promote a solution based on two states for two peoples must also accept the fact that even the Jewish people have the right for self-determination and their own state.