Since its founding, Israel has defined itself as both a Jewish and democratic state, while denying Palestinians their right to self-determination. 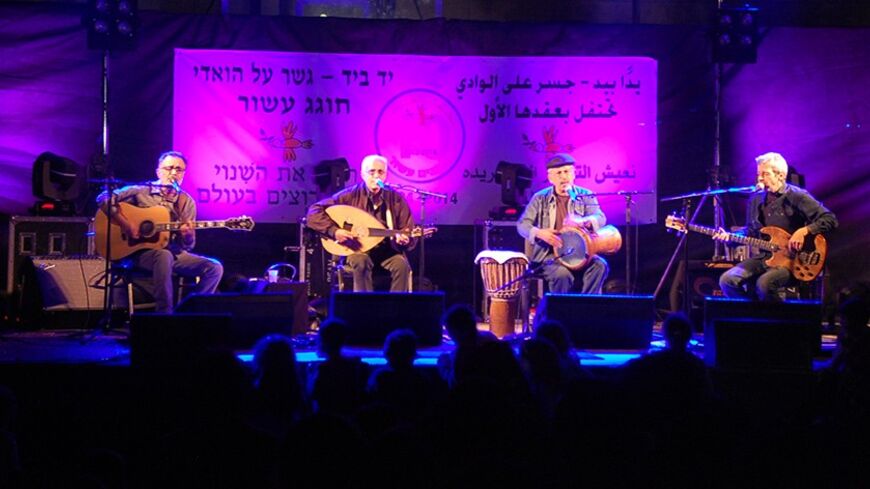 Musicians Ehud Banai, George Sam’an and their band perform at the 10-year anniversary for the Israeli bilingual school Hand in Hand — Bridge over the Wadi outside Kafr Qara, April 7, 2014. - Yoav Stern

On the evening of April 7, I was sitting in the schoolyard of the Hand in Hand — Bridge over the Wadi primary school, which is on the outskirts of the Arab village of Kafr Qara in the northern region of Wadi Ara. I was watching the boys and girls who huddled together at the foot of the stage and cheered Israeli singer Ehud Banai, Arab musician George Sam’an and their bands. My eyes then wandered around, to the parents, the teachers and the dignitaries — men and women, both Jewish and Arab, who attended the event marking the 10th anniversary of this bilingual school. When they held hands and started singing and dancing to the rhythm of Hebrew, Arabic and bilingual songs, I joined in.

Someone pointed to a young woman who was surrounded by kids asking for her signature. I was told she was Nof Atamna Ismaeel, the winner of the TV cooking reality show "Master Chef." Her children are pupils at the Bridge over the Wadi school.

Well, I thought to myself, could this place really be a part of the nation-state of the Jewish people? Is this school actually under the jurisdiction of the Ministry of Education of the Jewish nation-state? I regretted that Prime Minister Benjamin Netanyahu, the same person who demands that the Palestinian leadership in Ramallah announce that Israel is the state of the Jewish nation, was not present here. How would he have explained to Ismaeel and her children that they are foreigners in their own country? I thought it was a pity Minister of Foreign Affairs Avigdor Liberman has never met the school principal, Hassan Agbaria, and the Arab teaching staff. These teachers could have taught him a chapter on the history of the land of Israel. A visit to the Bridge over the Wadi school could have shown them how it is possible to maintain coexistence between the majority and the minority in the same country — a country that acknowledges the right of two peoples to sing to the same homeland-loving songs in two languages.

Like any other sovereign state, Israel has the right to define itself as it deems fit. The Knesset may decide that the Arabic language will no longer be an official language in Israel (a bill to this effect was, in fact, submitted in 2011). By the same token, the state may impose fines on schools that mark Nakba Day and organize visits to the destroyed villages where their students' forefathers were born. And the Ministry of Education may punish school principals in Arab villages for failing to force their students to sing the Israeli national anthem, including the words “A Jewish soul still yearns.” However, there is no way to dictate to others their own self-determination.

In his book The Impossible People (Nahar Books, 2013), Israeli historian professor Yehuda Bauer asks: “Is there a Jewish people or, possibly, a [Jewish] nation? And if there is one, what is it? What is a Jewish identity? Is there a relationship between Jewish identity, or Jewish identities, and Zionism, and in case there is such a relationship — what is it? And what is the relevance of all this to the relation between religion and society; between religion and the state?” Bauer reflects on these questions with reference to two texts that give voice to two extreme points of view: The Invention of the Jewish People by Shlomo Sand, and “Torat HaMelech” [literally translated as “The King's Torah”] by Rabbis Yitzhak Shapira and Yosef Elitzur.

Sand calls for the “Israelification of Israel” — that is, for the transformation of Israel from a Jewish nation-state with an Arab-Palestinian minority into a state where two cultural communities, or more, would coexist side by side. The citizens of that state would adopt a single, all-inclusive “Israeli” identity that would represent all communities in the country. On the other side of the gamut, the rabbis seek to establish and institutionalize the total supremacy of Jews over non-Jews. Bauer, in his treatise, comes to the conclusion that there is no such thing as a unique Jewish identity (or, for that matter, a British or a French identity, etc.). Rather, there are diverse Jewish (and other) identities, which form but a part — whether small or large, significant or less significant — of the variety of identities of every Jew.

True, there are Jews who define themselves as secular, and there are Orthodox Jews, Reform Jews, Conservative Jews, Zionists, post-Zionists and even anti-Zionist Jews. There are those who, like Netanyahu, argue that Judaism is a nationality, while others, like ultra-Orthodox Knesset member Yisrael Eichler (Yahadut HaTorah), maintain otherwise. Thus, in a Knesset debate on March 19, Eichler proclaimed, challenging the prime minister: “There is no Jewish nation … there is no such nation.” The left-wing Meretz Party, which identifies itself as a Zionist party, proposes that Israel be defined as “a Jewish state and a state of all its citizens.”

Under the Jewish law, a “Jew” is one born to a Jewish mother or properly converted to Judaism in accordance with the Orthodox Jewish law. At the same time, under the Law of Return, the right to become an Israeli citizen is also vested in a grandchild of a Jew — even if he happens to define himself as a Christian, a Muslim or without religion. The decision to grant to the grandchildren of Jews the civil rights guaranteed to Jews by the law has its origins in the Nuremberg Laws, which classified as Jews those descended from at least three Jewish grandparents. The founders of the State of Israel believed that Israel should serve as a safe haven — even for those identified as non-Jews under the Jewish Law — if defined as Jews under the classification of the Nazis, who had sent Jews to the extermination camps.

The Jewish people exercised this right by its 1948 Declaration of Independence. The United Nations Partition Plan for Palestine previously adopted in 1947 by the UN General Assembly (Resolution 181), stipulated that two independent states “shall come into existence in Palestine” — a Jewish state alongside an Arab state. The Israeli version of the Camp David Accords, signed in 1978, used the following terminology in its Hebrew version about a permanent settlement in the occupied territories: “The solution … must also recognize the legitimate right of the Arabs of the land of Israel and their just requirements.” The term “Arabs of the land of Israel” reflects the position of the Israeli right with regard to the Palestinian people, or rather, its refusal to acknowledge the existence of a Palestinian people, and hence, its right to self-determination.

It is no mere chance that in his Bar Ilan address in June 2009, Netanyahu talked about the “Jewish people,” while making a point of referring to the Palestinians as the Palestinian “public.” According to Netanyahu, this “public” lives within the heart of the “homeland'' of the Jewish people. However, Israel has no interest in ruling over it. As far as Netanyahu is concerned, the Palestinian ''public'' has no historical or national right to self-determination. The solution of two states for two peoples (assuming this is genuine), originated within him out of the fear of losing the Jewish majority and character of Israel. A nation that has struggled for its right to self-determination and succeeded in realizing it, denies the aspirations of a neighboring people to enjoy the same right and realize it.