When Will the 'Jewish State' Become the 'Israeli State'?

The Supreme Court has ruled that the existence of an "Israeli" nation has not been proven, thus reinforcing the notion that non-Jewish Israelis are second-class citizens. 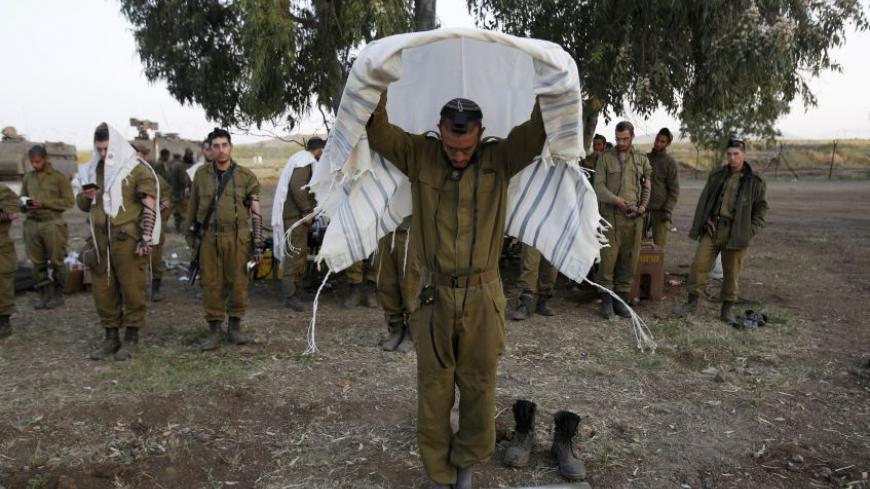 Israeli soldiers from the Golani Brigade pray close to the cease-fire line between Israel and Syria on the Israeli occupied Golan Heights, May 7, 2013. - REUTERS/Baz Ratner

Professor Uzzi Ornan has been pitted in a tenacious struggle with the Ministry of the Interior and the Israeli establishment in general for more than six decades. A linguist by training, Ornan is a member of the Academy of the Hebrew Language and a researcher of natural languages at the Hebrew University. Born in Jerusalem, he was banished during the British mandate to Eritrea due to his membership in the Irgun. He returned upon the establishment of Israel. A nonagenarian, he is neither disheartened nor ready to let up in his struggle for a secular identity for the state of Israel.

“I’m an atheist through and through. … The idea of the chosen people is utter nonsense. I don’t have a pope somewhere,” Ornan said in a series of talks in 1994 published under the title We are Canaanites. Established in 1939, Canaanism was an ideological movement, one of whose founders was Ornan. Its members wanted to cut themselves off from Jewish tradition in a bid to create a secular affinity among the peoples living in mandate Palestine.

In 1998 he founded the association Ani Israeli (I Am An Israeli) and was joined over the years by other politicians and intellectuals, including Uri Avneri, Shulamit Aloni and Adel Qaadan. A resident of the Arab city of Baqa al-Gharbiyye, Qaadan waged a successful legal battle after the residents of the Jewish town of Katzir rejected his family’s request to move there because they are Arabs.

Some 13 years ago, Ornan demanded that Israeli courts set a precedent by allowing him to register as “Israeli” rather than “Jew” under the category of “ethnic nationality,” thereby overriding the affiliation used by Israeli authorities, which is based on one’s religion. This week, on Oct. 2, the Supreme Court rejected Ornan's petition. “The existence of an Israeli ethnic nationality has not been proven,” a panel of judges, headed by Chief Justice Asher Grunis, determined.

What this ruling means is that the state will not lift the official separation between the various groups of the population, continuing to classify citizens according to their faith, that is, as Jews, Muslims, Druze, Circassians, Christians and members of other denominations. Consequently, the state of Israel remains the home for those of the Jewish faith, de facto leaving members of other faiths as second-class citizens. The Supreme Court shut the door on anyone who ever dreamed that Israel would become a pluralistic state in the 21st century, a place where a person’s religion is no indication of him or her being a better or more loyal citizen.

The controversy over the issue of having an “ethnic nationality” field [on an ID card] has been ongoing for some time. A year before Ornan's petition, the Supreme Court ruled, in February 2002, that Jewish converts who underwent reform or conservative conversion would be listed as Jews. Former minister of the interior Eli Yishai, of the ultra-Orthodox Shas Party, decided at that time to strike the field from the identity card. He did not want to be obligated to register reform and conservative converts as Jews, since he believed they had not undergone what he considered to be a proper conversion. Ten years later, Yishai reinstated the field on the ID card following the demand of Holocaust survivors who argued that Jewish ethnic nationality is precisely the reason why so many Jews had perished in the Holocaust.

By defining ethnic nationality as “Jewish,” however, Israel finds itself constantly embroiled in a fundamental, principled, ideological and theological debate that mandates members of other faiths being registered based on their religion rather than simply being called Israelis. Consequently, there is a Jewish ethnic nationality as well as other ethnic nationalities in Israel. Furthermore, all the state's symbols and institutions carry characteristics of Jewish tradition, history and heritage. This sentiment is enhanced by the lyrics of the national anthem: two million non-Jewish Israeli citizens certainly don’t feel a “yearning Jewish soul.” Furthermore, throughout the dozens of years of the conflict with the Palestinians, Israel’s leadership has always insisted that the Palestine Liberation Organization recognize Israel as a Jewish state.

Israel’s declaration of independence cites the importance of the state as a Jewish home in the aftermath of the Holocaust and the decimation of European Jewry during World War II. Israel was a safe haven for the survivors of the Holocaust and for those who had wanted to return to their ancestral land from the galut, or the exile. After 60 years, is it not time to rethink and redefine the character of the state? After all, in many countries around the free world merely asking a person to reveal his or her religion is deemed an invasion of privacy, and any civic decision based on religious affiliation is deemed discriminatory.

While it is not practical to do away with the designation of Israel as a Jewish state, many citizens nonetheless feel that religion is not a major component of their national identity or their solidarity with their state or homeland — just as professor Ornan, who was born in Jerusalem, fought for the Irgun and was incarcerated in Eritrea, strives to be defined as an Israeli and not as a Jew.

In recent years, abortive attempts have been made to pass the Ethnic Nationality Act. Former minister of home front defense Avi Dichter was one of the sponsors of the bill, which set out to determine the character of the state of Israel as the nation-state of the Jewish people. According to his proposal, only a Jewish majority could exercise its right to self-determination. Dichter's objective, as well as that of the other 39 Knesset members who joined him, was to prevent the possibility of the establishment of a binational state with an Arab majority that could then change the basic laws and the designation of the State of Israel as the national home state of the Jewish people.

The law was problematic and controversial mainly because of its undemocratic implications of discriminating against numerous segments of the population in Israel that are not Jewish. Can a state that defines itself as democratic give preference only to a Jewish majority? In the end, Dichter's proposed bill was quashed, although right-wing Knesset members, the chairman of the governing coalition Yariv Levin (Likud) and Ayelet Shaked (HaBayit HaYehudi) hope to revive it.

Is it not high time to call Israel the Jewish state, while allowing its citizens — Jews, Arabs, Druze, Circassians, Christians and members of other faiths — to be Israelis and feel equal without being classified according to their religious beliefs? An Israeli is an Israeli not because he or she is Jewish, but because they feel Israeli.