Iraqi Prime Minister Haider al-Abadi has publicly addressed the issue of "ghost" soldiers and employees, an aspect of rampant state corruption, and promised to fight the problem. 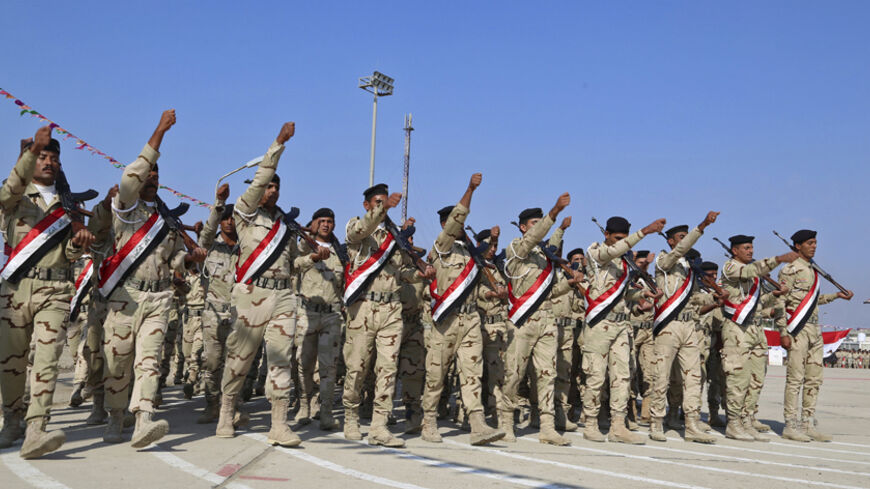 Iraqi Prime Minister Haider al-Abadi took a bold step forward when he announced Nov. 30, in front of parliament, that there were 50,000 made-up people counted in the Iraqi army, calling them “ghost soldiers.”

This was Abadi's first public usage of the term “ghost,” which first appeared in Iraq in 2003 and became more common after 2006. Iraqis jokingly use it to refer to nonexistent employees and soldiers who appear on payroll lists but do not in fact perform any work.

The term has won a place in popular Iraqi culture and is widely used sarcastically, with ramifications inside the different state institutions.

Abadi reiterated his commitment to fighting this phenomenon when he said Dec. 8 in Karbala, “There are a number of 'ghost soldiers' in other ministries. I am moving forward with reform to expose them. Campaigns were launched and others will be launched to topple me. … However, I will not back off, even if [this] leads to my assassination.”

He added, “The issue of 'ghost soldiers' is a dual crime: waste of public money and manslaughter, as this issue has caused lax security.”

Abadi's confrontational statement and reference to his own assassination came at the same time as statements by former Prime Minister Nouri al-Maliki, who denied any "ghost" presence. He said, “This information is not accurate at all, and the army is free of 'ghost soldiers,' except for rare cases that are being prosecuted, and responsible parties are being punished.”

It is important to note that the issue of "ghost soldiers" in military ranks, whose salaries end up in their commanders' pockets, is an old phenomenon in Iraq dating back to the 1990s. Back then, under the strict economic measures imposed on the regime by the UN following Iraq's 1990 invasion of Kuwait, the government allowed military commanders and officers to accept money from their soldiers in return for granting them long holidays. It is hard to prove this now, 20 years into the practice, but even back then, there were hundreds of statements by Iraqi soldiers protesting the spread of corruption.

The phenomenon evolved until the money from the soldiers became revenue that officers of all ranks depended on. The term "ghost soldiers" emerged in 2003 to describe a phenomenon linked to rampant corruption in state institutions, bribes, blackmail, favoritism and the exploitation of official positions for personal gain.

The state was supposed to be reformed with the ousting of Saddam Hussein’s regime in 2003. But the change did not end old corrupt practices, and instead created chaos and led to the replacement of centrist commanders in civil and security institutions and to the imposition onto institutions quotas filled by parties and individuals that lack the expertise and will to reform well. All this upset enabled extreme cases of corruption to flourish.

Abadi is facing a real war against state-level corruption — even before the war against terrorism — and this is the main reason the Islamic State was able to impose control over large swaths of Iraq.

Abadi did nothing more than acknowledge a fact known by all Iraqis: Military, security, civil and other institutions have become a gold mine for corrupt parties. He exposed what was already out in the open. What is needed now is for Abadi’s statements about "ghost" and unproductive employees in state institutions to be translated into legal action by the parliament and implemented by executive officials.

The exposure of this network and its leaders will most likely pave the way for rooting out the real corruption hotbeds in the Iraqi state. It will also allow the state to promote the coexistence of the different parts of Iraqi society.