Corruption in Iraq has spread to the army, as ghost soldiers share their wages with officials who cover for the latter’s absence from work. 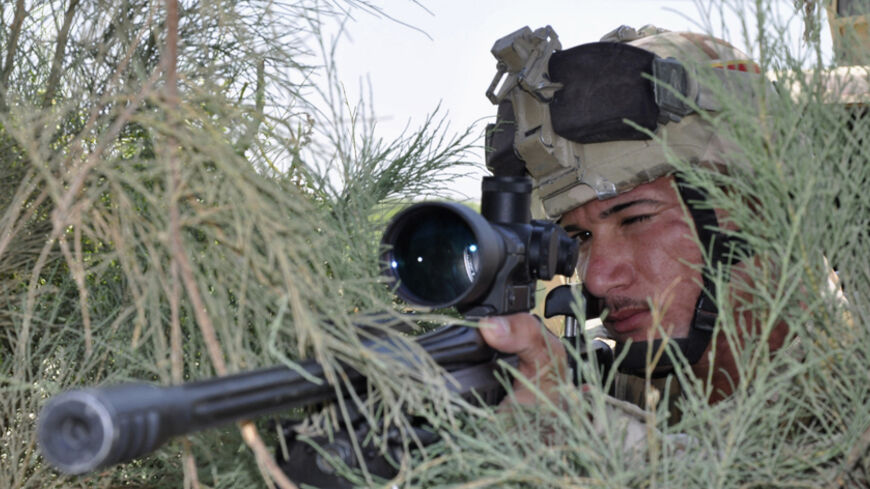 An Iraqi security forces soldier takes position during a patrol in the town of Jurf al-Sakhar, south of Baghdad, July 19, 2014. - REUTERS

The Iraqi army includes “ghost” soldiers, a purely Iraqi term used to describe members whose names are registered in the wages and salaries lists, but who are not actually present in the military ranks. Their wages go to leaders who cover for their absence.

There are ghost employees in state departments as well; they are absent in reality, but present in terms of official staff who enjoy salaries and privileges.

Al-Monitor was unable to interview officers who benefit from these ghost employees. Instead, it met with former lawmaker and leader in the Mutahidoun bloc, Mohammed Othman al-Khalidi, in Baghdad. He confirmed this phenomenon saying, “The ghost employees were one of the reasons behind the shocking collapse of the Iraqi army before the Islamic State (IS) in Mosul.

Mosul, the second biggest city in Iraq, fell into the hands of IS on July 10, after a sudden withdrawal of Iraqi troops.

Khalidi described these unreal soldiers as “ghosts in the army’s ranks, who get paid for staying home. This pushed the competent authorities to resort to armed militias to fill the gap within an army that failed to defend its country.”

According to statistics, whose source he did not mention, Khalidi estimated that 30% of the army members were “ghosts.”

Asked about measures taken to limit this phenomenon, he said, “We asked to restructure the armed forces, as part of the National Guard project,” adding, “The partisan designations by political parties and forces allowed the presence of numerous ghosts in all state facilities, and not only in the military institution.”

Al-Monitor’s numerous failed attempts to interview officers shows the difficulty of getting into corruption issues in Iraq.

However, writer and political analyst Jasim al-Mousway told Al-Monitor that corruption has spread in Iraq and that the reasons behind it were “the haste to form a military institution after 2003, in addition to the financial motives of certain leaders, which led to this dangerous state of corruption.”

According to some deputies, many corruption accusations have emerged within the Ministry of Defense in Iraq since 2003, including the arms deals with Russia.

Mousway also blames “unemployment, as corruption has become a source of easy money.”

Mousway, who is well informed of the plans of decision-making officials in the government and the military, said, “A campaign is underway to solve this phenomenon, and the upcoming years will witness a decrease in corruption, particularly within the military institution.”

Qasim Mozan, a writer and journalist in the Iraqi journal Al-Sabah, acknowledged the presence of this phenomenon to Al-Monitor, but said he also called it “an attempted exaggeration by media and satellite channels, for political interests. Former head of the parliamentary committee and member of parliament for the Liberal bloc Hakim al-Zamli was even drawn into promoting this phenomenon, given his bloc’s position toward former Prime Minister Nouri al-Maliki, and knowing that this issue was raised during the latter’s rule.”

Mozan said, “The ghosts existed in all state facilities even before 2003, when the regime of late President Saddam Hussein was overthrown, and still exist today.”

As a journalist, Mozan said he thinks that "the phenomenon is limited and on a small scale, as there are soldiers fighting right now.”

He believes that the phenomenon is most probably exaggerated due to it being “part of the psychological war against the army, in an attempt to affect its morale. There are some people who actually believe it.”

A TV presenter and field reporter told Al-Monitor on condition of anonymity, “Trusted members in the army and internal security forces told me about colleagues of theirs making deals and agreements with their direct superiors. The purpose of such agreements is for the members not to go to work throughout the month, as long as they give the officers half of their salaries. The members then go work as taxi drivers or any other private profession.”

The reporter told another corruption story of when he was in Samarra (125 kilometers, or 77 miles, north of Baghdad) to cover a military operation. “We were surprised by the arrival of a committee from the Office of the Inspector General in the Ministry of Defense to audit the administrative aspects in the leadership of Samarra’s operations. The inspection lasted four days, and the committee members distributed salaries themselves to see if there were any possible ghosts.”

“The committee did not find any ghost members, which was no surprise. The officers had already known about the committee’s inspection a week earlier and they instructed the ghost members to attend and receive their salaries themselves,” the reporter said.

The accountant of al-Mahawil camp (100 kilometers, or 62 miles, south of Baghdad), Arkan Hussein, told Al-Monitor his estimates of the corruption deals' profits, “The salary of a ghost soldier is around 1 million dinars a month [about $800], and about $400 goes into the pockets of the officers. If an officer has at least 10 of these ghosts, he would get about $5,000 per month, not to mention other officers who hide dozens of ghost soldiers, in addition to other salaries and privileges that the leaders benefit from.”

This scene is recurring today in most military and civilian workplaces. The ghost employees quickly go to their workplace the moment they are summoned, and as soon as things calm down and the inspection committees leave, they go back to their other job. Meanwhile, the state budget pays millions of dinars for those ghost soldiers and staff members who are hard to find amid the corruption spread in the Iraqi scene.