Are Israeli voters more worried about security or economy?

Some Israeli left-wing politicians have hinted lately that the reported attack on Syria well serves Prime Minister Benjamin Netanyahu and the Likud Party ahead of the elections, shifting public focus away from an economic agenda back to security threats. 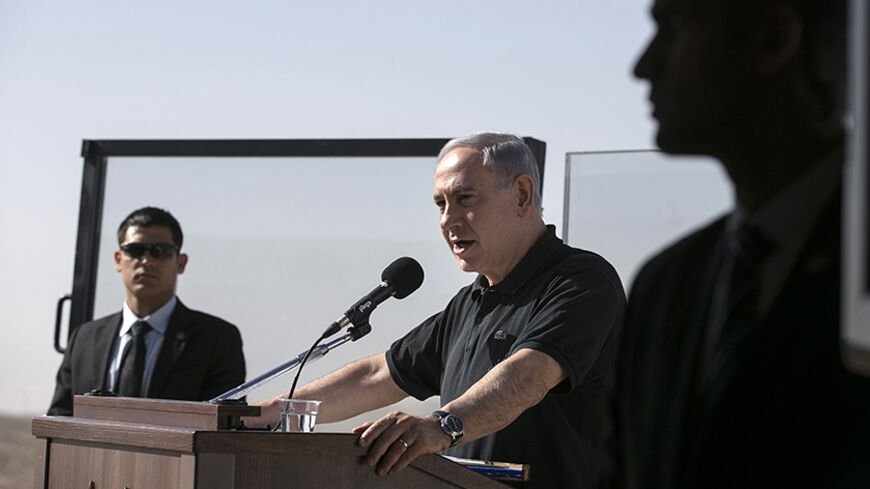 Israel's Prime Minister Benjamin Netanyahu speaks during a visit to the Israeli army's training base complex near the southern city of Beersheba, Dec. 10, 2014. - REUTERS/Baz Ratner

Israel is a country made up of diverse tribes, communities, ethnicities and religions. There are rival political camps and many different approaches to issues. If there is a single aspiration that almost all Israeli citizens have in common, it can be summarized by a desire to be a normal country. A nation just like all the other nations.

Israelis take pride in their complex society and in what makes their country so special and unique. But they are also frustrated by it. The percentage of people who travel overseas each year is among the highest in the world. Israel is a densely packed pressure cooker, always on the verge of boiling over. It is crammed with existential challenges, terrifying threats and overwhelming risks. Even those people who can’t afford an expensive jaunt overseas still need to “clear their heads” every so often.

One of the gauges of a normal country can be found in the questions: What do citizens vote on in elections? What is the primary consideration that brings Israelis to the polling booth? What consideration determines which ballot Israelis slip into the envelope, when they decide for whom to vote?

There are very few countries in the world where the electorate votes exclusively on national and personal security concerns. In Israel, however, this has been the primary consideration when people go to vote, ever since the country was founded and until today. It is easy to understand why. Israel is the only country in the world with a significant security threat hovering over it ever since it declared its independence. It is the only state (with the possible exception of Taiwan) that has so many other countries calling for its destruction (with one of them hard at work developing nuclear weapons to achieve that goal).

Every four years in the United States citizens ask themselves, “Am I better off today than I was in the last election?” The question in Israel is different. It is: “Has my personal safety improved or deteriorated over the past four years?” That is why, no matter how touching Israelis’ aspiration may be, their state is still far from the designation of a “normal country.”

The typical Israeli citizen is very concerned about his economic situation, the quality of education, social inequality and the state of health care. However, when Israelis go to the polls, they base their vote on national security concerns. Which of the candidates causes them to feel safe? Which candidate can stand up to all the threats accumulating at the threshold of the Jewish state? Who can deal with Hamas, Hezbollah, the Islamic State, Jabhat al-Nusra, the Iranian nuclear program and all the other security issues? Which candidate will make it possible for Israelis to sleep relatively soundly at night, to overcome their fears, to feel safe?

The elections of 2013 signified the beginning of a turnabout to this approach. Two years earlier, in 2011, masses of Israelis took to the streets demanding social justice. The final demonstration of this mini-revolution drew almost 1 million Israelis, or about 10% of the population.

Prime Minister Benjamin Netanyahu had no response to these concerns, so he preferred to release hundreds of Palestinian murderers in exchange for abducted Israeli soldier Gilad Shalit. Netanyahu wanted to assuage the protesting masses, most of whom identified with the center-left camp, and to put a smile back on their faces. Then former Finance Minister Yair Lapid won 19 seats in a sweep of most of the protest votes.

It looks as if this trend will continue in the current elections. In a poll conducted by Israeli daily Maariv Dec. 4, Israelis were asked what issue they would base their vote on in the upcoming election. Some 34% responded that it was socioeconomic issues, 30% said that it was security concerns, and 14% answered that it was social justice. If we combine socioeconomic concerns with social justice, we get almost 50%, as opposed to the 30% who remain loyal to security issues. This is a significant shift. It is dramatic in that it has the potential to change the very face of Israeli society.

It is what propelled former Minister Moshe Kahlon, a political backbencher until just a few years ago, to a very tantalizing starting point in the coming elections. Polls anticipate Kahlon winning between 10 and 12 seats, even before the campaign has started. Kahlon built a reputation for himself after clashing with the tycoons who owned Israel’s largest cell phone companies. He brought them to their knees, opened the market to competition and provided the average Israeli several hundred shekels in savings per month due to plummeting cell phone rates.

Kahlon is promising to take on the big banks and other monopolies. It is the source of his strength. Almost every Israeli contends with the cost of living on an almost daily basis. The price of just about everything is excessive, from water rates to the price of a Milky chocolate pudding snack and from the cost of cottage cheese to the cost of housing (it takes 139 average monthly salaries to purchase the average apartment in Israel). This is what bothers Israelis more than anything else. Yes, even more than security.

Given this state of affairs, the security ticket has lost its clout, and with it, so has Netanyahu. In addition to this, the security aura surrounding Netanyahu had already suffered a serious blow last summer, when the Israel Defense Forces (IDF) needed more than 50 consecutive days to restore calm to Gaza, without obtaining a clear campaign outcome. Tel Aviv came under rocket fire on an almost daily basis, and the general sense of security disintegrated. Nor is the simmering intifada in Jerusalem accommodating to the Netanyahu slogan of “Strong against Hamas.” But what worries the prime minister more than anything else is the way that the socioeconomic agenda is taking over the Israeli agenda.

Is this shift genuine? That remains to be seen. On several occasions in the past, it looked like Israelis had sobered up from any illusions they had of achieving security and turned to focus on themselves instead. Every time that happened, however, something else happened, and hope vanished. Experts and pollsters alike agree that even when Israelis respond that the economic situation is what determines how they vote, it still doesn’t prove what will actually happen at the voting booth. It does not prove that when they enter it and stand face to face with the various stacks of ballots, they won't be influenced by that same primeval, Israeli-Jewish fear of the enemies surrounding the country, the threats hovering overhead and the future of their children, born into and being raised in this reality (despite all of the above, when it comes to the birthrate, Israel is a powerhouse, far ahead of Europe, which is going extinct).

Elections are scheduled to take place in Israel in less than three months, on March 17. Some security issue can erupt at any given moment, causing Israelis to forget the challenges of getting by day-to-day for a primeval, existential threat. The question is whether Netanyahu or one of his people will initiate some move intended to heat up one of the fronts, to put security issues back on the agenda.

The foreign press is reporting that the Israeli Air Force conducted strikes against targets near Damascus on Dec. 7. The Syrians themselves confirmed as much in an official announcement. Was this attack on point, based on intelligence reports and a need to prevent advanced armaments trickling to Hezbollah, and therefore in accord with Israel’s standard policy? Or was someone trying to pick a quarrel and escalate tensions in the region? A few Israeli politicians on the left have intimated as much in the days following the assault.

All investigations into the matter indicate that this is a very unlikely scenario. Israel’s Defense Minister Moshe (Bogie) Ya’alon is an unsoiled politician, honest to a T (and sometimes to a fault). Someone like Ya’alon would never cooperate on actions of this sort. Nor would the current Chief of Staff Lt. Gen. Benny Ganz help to do that. The same is true and even more so about the next chief of staff, Maj. Gen. Gadi Eizenkot, who will take office on Feb. 15 (one month and two days before the elections). He is one of the most honest and professional officers ever to emerge from the IDF. Under him, no one would dare introduce election considerations to security considerations.

Netanyahu himself is not exceptionally bold. It is rare for him to make a precarious decision or take a gamble. But he too would not be the one to escalate tensions in the region just to win a few more seats, especially since the results of such an escalation could actually harm him rather than help him. Once the tiger is let out of its cage, it is impossible to tell whom it will attack.