Three US sailors roughed up in Istanbul

Members of the Youth Association of Turkey roughed up three US sailors, reflecting once again the uneasy nature of the US-Turkey relationship. 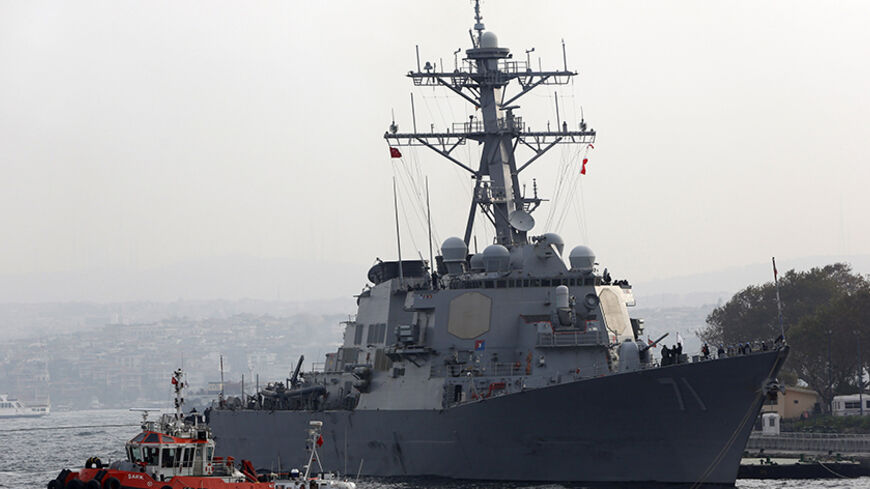 The relationship between the United States and Turkey has never been an easy one. When members of the Youth Association of Turkey, a far-left anti-American student group, roughed up three US Navy sailors in civilian clothes on Nov. 12 in Istanbul near where their warship was docked, it made clear the delicate nature of the relationship.

While the Turkish authorities stayed silent about the incident, and the United States' condemnation of the incident was a measured one. After all, this was not an incident between the two states. “These attackers bring great discredit upon the Turks and the Turkish reputation for hospitality, which is well known,” Col. Steve Warren, a Pentagon spokesman, said Nov. 12. “We enjoy a strong relationship with our NATO ally in Turkey” and “we don’t see this as something that will disrupt that strong relationship.”

The US Embassy in Ankara was also quick to echo the same sentiment through the tweets it rapidly sent out. “The video showing an assault on three visiting American sailors is appalling. While we respect the right to peaceful protest and freedom of expression, we condemn today’s attack in Istanbul, and have no doubt the vast majority of Turks would join us in rejecting an action that so disrespects Turkey’s reputation for hospitality.”

The US Navy also expressed in a written statement that the sailors were able to remove themselves from the situation “without sustaining injuries and are safely back aboard USS Ross.”

“The US Navy is currently working with the Turkish National Police and US Embassy staff to investigate this incident,” the statement read. “The US Navy will continue to coordinate with Turkish authorities to review security procedures for future ship visits.”

According to Metropoll’s latest public survey of Turks' opinions on US policies in light of the recent developments in the region, 71.8% expressed disapproval, while 15.4% viewed the policies in a positive light. Soon after the incident, the Twitter hashtag ‪#TGBdenABDyeÇuval (“Youth Association of Turkey puts bag over US [heads]”) started trending as people lashed out with their perception of US meddling into their domestic and regional affairs. Still, others expressed that the criticism of US policy was expressed so tastelessly.

This shows the difficulty in separating people’s perceptions of US policies in the region from the actions of people in the street, be they far-left or ultra-nationalist. Although the US administration and the Turkish government might be able to put setbacks in the relationship behind them, some ordinary people still hold grudges against US forces for capturing 11 Turkish special forces members in Sulaimaniyah, Iraq, on July 4, 2003, arresting them, handcuffing them and putting bags over their heads. The official US story was that back then there was reliable intelligence that Turkish troops were preparing to assassinate the governor of Kirkuk, but many Turks considered that allegation simply an excuse to take revenge of the March 2003 Turkish parliament vote that denied US troops access into Iraq via Turkish territory.

The Nov. 12 video clearly showed that about a dozen members of the Youth Association of Turkey reminded the three US sailors of that 2003 incident when the sailors were roughed up and briefly had bags put over their heads. An official at the US Embassy told Al-Monitor, “The victims all went to the police station yesterday and filed a complaint.” Yet, the alleged assailants were released without any charges the morning of Nov. 13.

Ersan Sen, an Istanbul-based criminal lawyer, told Al-Monitor that those assaulted could argue that they were victimized due to their military identity, but that there was little prospect of a legal solution. “They can file a complaint under Article 125 of the Turkish Penal Code stating that they have been insulted and defamed. In any case, for the legal procedure to be completed, they need to be examined at the medical examiner’s office,” Sen told Al-Monitor. “The prosecutor cannot proceed by watching the YouTube video and attribute a crime to these people’s actions based on that. We don’t know at this stage what the sailors said in their complaints.” He added, “If the judge had enough material at hand to hold these people behind bars, he would have done that no matter what. Their release is not a political decision but the outcome of what the law dictates.”

The youths shouted at the sailors saying, “Yankee, go home!” as well as calling them killers and yelling that they should leave Turkey. They threw red paint at the sailors and briefly put white bags over their heads. “It’s obvious why they have anchored here — because of their ambitions in the Mediterranean and the Black Sea,” association spokesman Melik Dibek said. “American imperialism is the reason why the Middle East has turned into a chamber of fire.”

Rasim Ozgur Donmez, associate professor in the international relations department of Abant Izzet Baysal University in Bolu, however, said the incident mirrors how Turkish foreign policy plays in domestic affairs. “The US Middle East policy and specifically its recent Kobani policy as well as the 2003 Iraqi occupation have created a trauma in the minds of the Turkish nationalists,” Donmez told Al-Monitor. “To state it more openly, people have developed a perception that the Kurds will establish an independent state despite Turkey’s opposition. Yesterday’s incident is a clear reflection of that sensitivity in the nationalist circles.”

Donmez said that while this incident ended with no one being hurt, “one cannot stop wondering that the result could have been something else.”