Attack on US sailors highlights state of US-Turkish ties

US officials condemn the Istanbul attack on three US sailors as "ugly and disturbing," and say it is “a great discredit upon the Turks and the Turkish reputation for hospitality.” 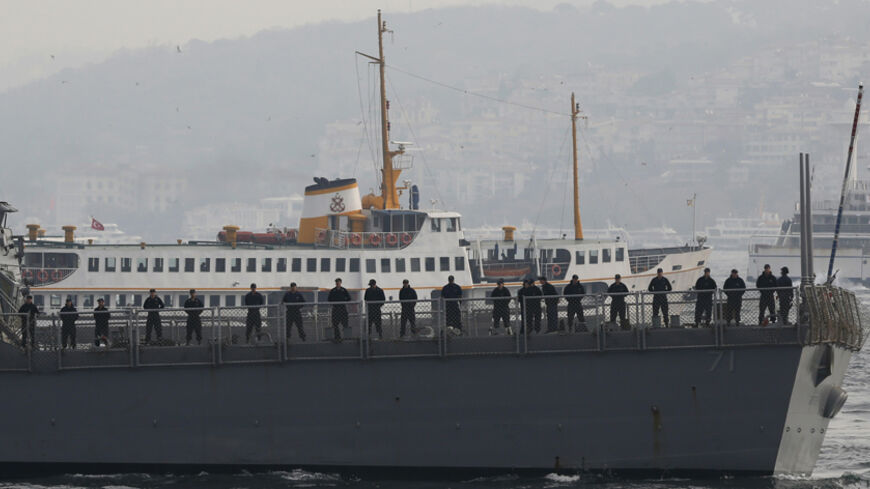 The Nov. 12 attack by a group of Turkish nationalist youth in Istanbul on three US sailors on shore leave from the USS Ross poses a new test for Ankara and Washington, whose ties are already strained over developments in Syria.

Diplomats are trying to limit the damage, but the leniency shown to the youth by Turkish authorities and the lack of a strong condemnation by the government, apart from a brief statement by the Ministry for Foreign Affairs, is said to have increased the anger on the US side.

The attack by the group attached to the fanatically anti-American Turkish Youth Union (TGB) also comes just days before a visit to Turkey by US Vice President Joe Biden, who's scheduled to hold talks with President Recep Tayyip Erdogan.

These talks are already clouded by the controversy Biden caused in October when he attributed remarks about Syria to Erdogan, during an Oct. 2 address to students at Harvard University.

Biden said Erdogan had acknowledged that mistakes by Ankara had helped the rise of the Islamic State (IS) in Syria. Erdogan strongly denied this and demanded an apology. A news release by the US Embassy in Ankara on Oct. 4 said Biden, speaking with Erdogan, had “apologized for any implication that Turkey or other Allies and partners in the region had intentionally supplied or facilitated the growth of [IS] or other violent extremists in Syria.”

The controversy was revived, however, when Biden told CNN later that he never apologized to Erdogan. This is where the matter rests and the attack on US sailors is not expected to aid efforts at breaking the ice.

While many Turks condone it, there are those in Ankara who are unhappy over the attack on the sailors.

“Under normal circumstances this incident would have passed as a relatively isolated one,” a senior source close to the Foreign Ministry told Al-Monitor.

“But prevailing tensions between the two countries have given it a significance it normally would not have,” the source, who spoke on condition of anonymity because of his sensitive position, added.

The three sailors in civilian clothes from the USS Ross were confronted in Istanbul’s Eminonu district by the TGB youth, who tried to put hoods over the sailor’s heads while chanting “Yankee go home!” The protesters also threw red paint on the sailors while chasing them down a street, and posted a video of the incident on YouTube.

Twelve members of the group were arrested by the police but were released by a court the next day without being questioned, although there are reports that they could still face charges. Meanwhile, their rapid release flies in the face of a demand by Washington for the incident to be rapidly investigated.

Pentagon spokesman Col. Steve Warren told reporters on Oct. 12 that they condemned the "ugly and disturbing" attack by “what appeared to be thugs on the street” who were “a great discredit upon the Turks and the Turkish reputation for hospitality.” Pointing out that the United States has strong ties with Turkey, Warren said, “We’re confident the Turks will rapidly and effectively investigate [the incident].”

The US Embassy in Ankara also responded on Oct. 12 over its Twitter account, calling the incident “appalling” and saying that while the United States respected the right to peaceful protest and freedom of expression, it condemned this attack.

The only statement from Turkey on the incident came from the Ministry for Foreign Affairs. “Press reports indicate that some US officials visiting Istanbul were assaulted today, under the guise of a peaceful protest. We condemn this disrespectful act, which is in no way tolerable,” ministry spokesman Tansu Bilgic said in response to a question on Oct. 12.

This was a relatively low key statement noted for its reference to “press reports” about an incident the ministry could easily get first-hand information about. It was also noted that this statement was issued in response to a question, thus suggesting that the ministry might not have issued a statement at all if it had not been asked to comment on the affair.

Attacks on US sailors are not new for Turkey, where anti-American sentiments have always been high. The tradition goes back to the 1960s when a group of US sailors on shore leave from the 6th Fleet were dumped into the Bosporus by left-wing students.

A similar attack occurred in the holiday resort of Bodrum in October 2011 when US sailors were assaulted by another group of TGB youth and had hoods put over their heads. Unlike the latest incident, though, charges were leveled against those assailants, and the case, in which the prosecutor was seeking up to 16 years in prison, is still continuing.

The use of hoods in these attacks harks back to 2003, shortly after the US invasion of Iraq, when a group of Turkish soldiers in Sulaimaniyah in northern Iraq were arrested, handcuffed and had hoods placed over their heads by US soldiers. They were accused by the US military of plotting to assassinate Kurdish officials, but the allegation was never proved.

The general perception, regardless of whether this is true or not, has been that the US military in Iraq was retaliating for the refusal by the Turkish parliament in March 2003 to allow the US military to use Turkish territory to invade Iraq. The Sulaimaniyah incident, which caused serious friction between Ankara and Washington, created a national outcry in Turkey, where it is still remembered vividly.

Faruk Logoglu, who was Turkey’s ambassador in Washington in 2001-05, which covers a difficult period in ties, nevertheless believes that such attacks against US sailors in Turkey can not be condoned.

“This can not and should not be the answer to the Sulaimaniyah incident,” he told Al-Monitor, saying that the latest attack against the US sailors had come at a highly sensitive time in Turkish-US relations. Logoglu, a deputy head of the main opposition Republican People's Party (CHP), and a member of the Turkish-US Parliamentary Friendship Group, also disapproved of the support for the TGB youth by a maverick CHP deputy.

Suheyl Batum, the deputy in question, was outside the courtroom when the 12 arrested TGB members were released on Oct. 13 without being charged. Calling the US soldiers “bandits,” Batum said the TGB youth “said what had to be said and did what had to be done.”

There are reasons to believe that this also reflects the sentiment of many Turks. The latest Global Attitudes Survey by the Pew Research Center shows that 73% of Turks have a negative view of the United States.

Some see the government’s general silence on the latest incident in this light, too. Logoglu also hinted at this when asked why he thought the government preferred to remain silent over the matter. “Perhaps it feels there is a cost to speaking out about it,” Logoglu replied.

It is also a fact that Erdogan has been fueling anti-Americanism with his remarks. In mid-October he blasted at latter-day versions of Lawrence of Arabia who, he said, were trying to undermine Turkey and change regional borders.

Diplomats in Ankara believe that Washington will try to limit the damage to ties from the latest incident also, despite its anger, given Turkey’s continuing strategic importance. But they note that these ties are currently less than friendly.