A deadly attack by an Islamic State cell on Saudi Shiites has upped the ante in the jihadists' threat to the Saudi royal family as the guardians of Islam's most holy sites. 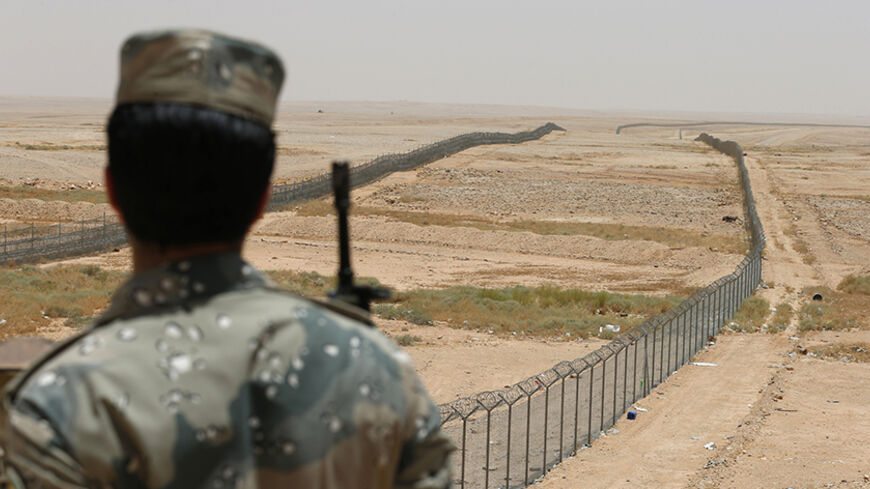 A member of the Saudi border force stands guard next to a fence on Saudi Arabia's northern borderline with Iraq, July 14, 2014. - REUTERS/Faisal Al Nasser

Saudi authorities have reported uncovering a large jihadist network working for the Islamic State (IS). The group was responsible for at least one sectarian attack on Saudi Shiites. At the same time, the kingdom is frustrated that the West is cooperating with Iran to fight IS in Iraq in an "unholy alliance" that Riyadh fears will ease Tehran's isolation.

The Saudi Interior Ministry reported Nov. 24 that three Saudi citizens and a Qatari linked to IS had carried out an attack on a Shiite village in the oil-rich Eastern province in early November. The attack killed nine Shiites and injured 13. The jihadist cell was tracked and all four members killed or arrested. At least two Saudi police officers died in the clashes involving multiple gunfights. Another 77 suspects with alleged links to the killers — including a Jordanian, a Turk and a Syrian — were arrested. The rest are Saudis. The Interior Ministry does not often defend Shiites' rights, but in this case, it had no choice given the IS connection.

The network had pledged loyalty to IS leader Abu Bakr al-Baghdadi and took its orders from IS in Iraq and Syria, communicating frequently. IS chose the target and timing for the operation in the Eastern province. The attack took place at a Shiite mosque on the holy day of Ashoura, the anniversary of the martyrdom of Muhammad's grandson Hussein. Baghdadi clearly wants to expand his war on the Shiites to the Saudi kingdom and probably other Gulf states as well. Bahrain is another likely target.

The Saudis have been fighting al-Qaeda cells for more than a decade, but this is the first threat from IS. This week, Saudi courts convicted three members of al-Qaeda in the Arabian Peninsula for conspiracy to attack Interior Ministry headquarters in Riyadh.

As many as 2,500 Saudis have reportedly gone to Syria and Iraq in the last four years to fight with Sunni extremist groups, primarily IS and Jabhat al-Nusra, with several hundred reported to have died in combat. Saudi authorities only this year belatedly banned travel abroad to join jihadist outfits. Controls and barriers have been strengthened on the Iraqi and Yemeni borders to try to prevent Saudi jihadists leaving or returning.

The Saudi blind eye to Sunni sectarian violence has been a source of friction with Washington since the start of the Arab Spring. Vice President Joe Biden accused the Saudis of encouraging Sunnis to go to Syria to fight Bashar al-Assad's regime, remarks for which he later apologized. The Saudis have agreed to work with the United States to build a moderate Syrian opposition.

The Saudis remain concerned, however, that the war against IS is rehabilitating Iran. The Saudi Gazette ran an editorial on Nov. 26 titled "Another US line in the sand," about the extension of the nuclear negotiations with Iran. The op-ed's bottom line is "Washington has found itself in an unholy alliance with Tehran to confront the terrorists of IS." Thus the United States is just "playing for time" on the nuclear front. Washington also won't act against Assad, presumably to avoid offending Tehran. The new deadline for reaching a deal with Iran is meaningless, another useless Obama red line. US intelligence is implicitly accused of ignoring evidence of secret nuclear activities in Iran to work with the Shiites in Iraq on IS.

The Saudi press publishes what the royal family wants in print, so the editorial has the imprimatur of the Royal Palace. The piece concludes, "Obama is playing a high-risk strategy. Iran is leveraging its apparent ability to help Iraq and the US to confront IS to protect the murderous Assad and its own illegal nuclear activities."

King Abdullah faces an exquisite policy dilemma. Baghdadi is an existential threat to his authority as Custodian of the Two Holy Mosques in Mecca and Medina. As the self-appointed Caliph Ibrahim, Baghdadi has asserted his claim to rule the holy cities in the Hejaz. The Saudis, he argues, are usurpers. Now that IS is operating inside the kingdom and trying to spark civil war through the country's long-oppressed Shiite minority, Abdullah must fight IS. The Royal Saudi Air Force is taking part in the air battle. Crown Prince Salman's son has flown combat missions against IS targets.

Fighting IS in Iraq means aligning with the Shiite governments in Baghdad and Tehran. The Saudis believe Tehran is the real power in Baghdad and that the Iranian intelligence and security services control the Iraqi army and Shiite militias. Helping the Iraqi state fight IS only solidifies Tehran's grip.

Blaming Obama for the current mess is a simple answer, but not a solution. What the region needs is an end to state manipulation of sectarian violence by Iran and Saudi Arabia and a cooling of Shiite-Sunni tensions. The Interior Ministry's move to bring IS killers to justice is a good first step in that direction, but much more is needed.