Saudi King Abdullah bin Abdulaziz makes a rare visit to Egypt for Abdel Fattah al-Sisi's inauguration, as the threat from the Islamic State of Iraq and al-Sham (ISIS) complicates its regional policies. 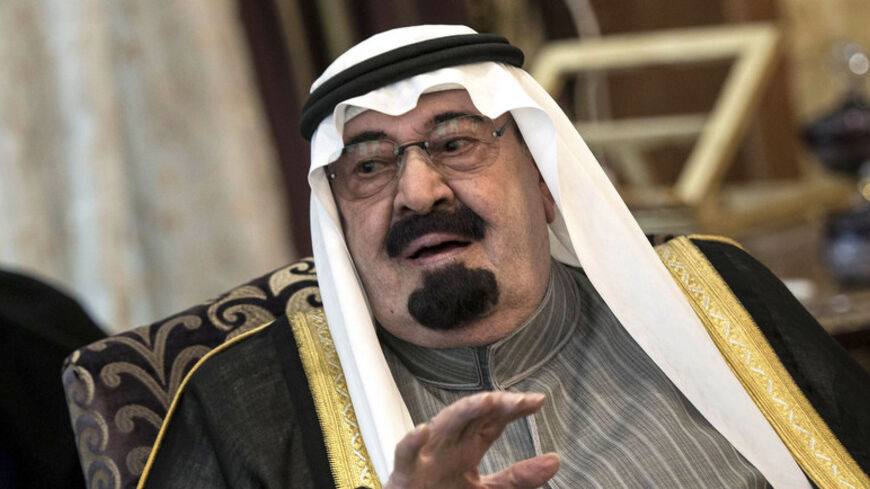 Saudi Arabia's King Abdullah bin Abdulaziz talks with US Secretary of State John Kerry (not pictured) before a meeting at the king's desert encampment in Rawdat al-Khuraim, Jan. 5, 2014. - REUTERS/Brendan Smialowski

It had the feel of a victory lap, albeit short and quick. Saudi King Abdullah bin Abdulaziz visited Cairo on June 20 to congratulate Egypt's new President Abdel Fattah al-Sisi on his inauguration. For the ailing monarch it was a symbol of the kingdom's success in turning back what he labeled the "strange chaos" of the Arab Spring.

The king never left his specially built royal airplane at the airport, and received Sisi inside its palatial interior. The stop was only a couple of hours between Morocco, where the Custodian of the Two Holy Mosques was recuperating from medical treatment and Saudi Arabia. Still, Abdullah is the first foreign head of state to visit Sisi since his inauguration. Abdullah was the only head of state Sisi mentioned in his inaugural address.

The king's official party included Prince Bandar bin Sultan, who resigned as the kingdom's intelligence czar earlier this year. The prince's inclusion in the Cairo visit shows he remains a player in Saudi decision-making.

Abdullah was the first foreign leader to congratulate Sisi after his coup last July, only minutes after he seized power. Sisi was Egypt's defense attache in Riyadh before becoming director of military intelligence.

Since the coup, the kingdom has organized a multi-billion bail out for Egypt, along with its Gulf allies Kuwait and the United Arab Emirates. Sisi has said they have provided or promised $20 billion so far. Abdullah has called for a donor's conference to raise more money for Egypt.

The success of the counter-revolution in Egypt and the defeat of the Muslim Brotherhood there is a major success for the king. The Brotherhood has become the kingdom's bogeyman, which is very ironic since it was once the kingdom's protege. It has been outlawed as a terrorist organization along with al-Qaeda in the kingdom.

The king was deeply alarmed by the start of the Arab awakening in 2011, chaos seemed to be swirling around the kingdom, and its allies such as Tunisia's Ben Ali and Egypt's Hosni Mubarak were dropping like flies. But three years later, Sisi has restored autocracy in Cairo, a pro-Saudi government holds onto power in Yemen and the Sunni royal family remains in charge in Bahrain. In all three cases the kingdom has worked hard to prevent revolution. It's expensive — $30 billion or so a year according to one Saudi estimate — but so far so good. In its immediate neighborhood on the Arabian Peninsula and in the Arab world's most populous state, Egypt, the revolution is thwarted for now.

Of course, the same cannot be said for Saudi policy in Syria and Iraq. The rise of the al-Qaeda-inspired Islamic State of Iraq and al-Sham (ISIS) is deeply worrisome for the Saudis. While they welcome the defeat of Iraq's Shiite government and the pressure on Syrian President Bashar al-Assad from the Sunni jihadists, the royals know ISIS is their enemy, too.

ISIS is a very dangerous enemy for the monarchy because its extreme sectarian ideology has many supporters in the kingdom. Hundreds of young Saudi men have flocked to ISIS to fight with it, others send money to help it. Some parts of Saudi public opinion seemed thrilled to see ISIS seize Mosul and threaten the Shiite holy cities in Iraq, after all, the Saudis themselves pillaged Najaf and Karbala two centuries ago.

But the kingdom is deeply concerned that the ISIS jihadists are uncontrollable and plotting against the House of Saud. Scores of ISIS supporters were arrested last month and ISIS leaflets have been confiscated in Saudi cities calling for violence against the state. Al-Qaeda's terror offensive in the kingdom in 2004-2005 remains a fresh memory for the king, one he does not want to repeat.

The royals also fear that Iran will be the ultimate beneficiary of the jihadist spring in Iraq and Syria. The thought of American jets providing air support for Shiite armies in Mesopotamia is not comforting to Abdullah. Rather, it underscores deep Saudi fears that Washington and Tehran are on the verge of a rapprochement at the expense of Saudi and Sunni interests.

Even if there is no Iranian-American entente, the Saudis see Iran growing more powerful with client states in Damascus, Beirut and Baghdad. The impact on the restive Shiites in Manama and the kingdom's eastern province is alarming. A Shiite crescent was the nightmare scenario Jordan's King Abdullah foresaw years ago; his Saudi fellow monarch shares it today. The Saudis know Jordan is very vulnerable today to ISIS terror attacks.

So, Abdullah's victory lap was appropriately short. The Saudis have helped stoke the fire of sectarian violence in the Middle East for years, now the flames are out of control and may burn for years to come.