Among the top priorities for Khaled bin Bandar bin Abdul Aziz, the new chief of Saudi General Intelligence, will be to beat back the challenge of the "Islamic State" in Iraq and Syria. 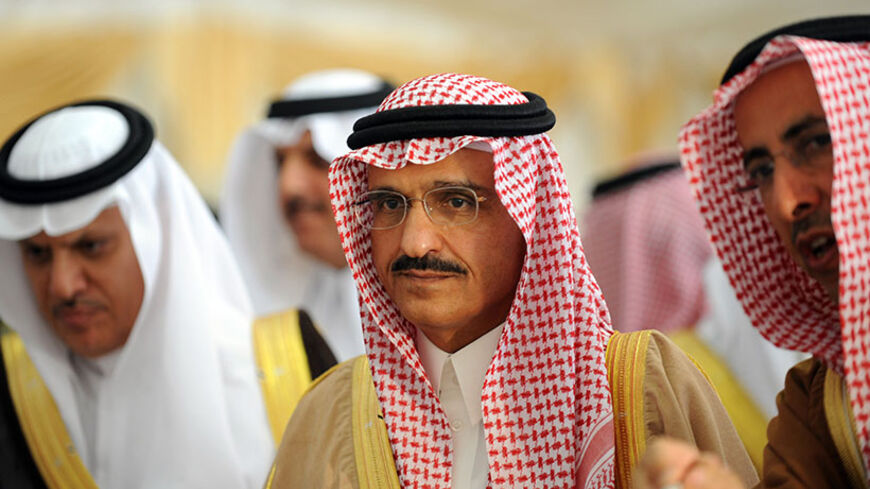 With the al-Qaeda spin-off Islamic State of Iraq and al-Sham (ISIS) now virtually on its northern border, Saudi King Abdullah bin Abdulaziz has appointed a new spy master and a new special envoy for the kingdom. The appointments also strengthen the king’s hand in the succession process.

On July 1, Abdullah appointed Prince Khaled bin Bandar bin Abdul Aziz to be chief of Saudi General Intelligence, the kingdom’s equivalent of the CIA, where he will also hold the rank of a cabinet minister. Prince Khaled is the third son of one of the oldest surviving sons of the modern kingdom’s founder, King Abdul Aziz ibn Saud, and thus a prominent figure in the next generation of Saudi leaders. Born in 1951, Khaled is a graduate of the Royal Military Academy Sandhurst, the elite British military academy that has trained dozens of Arab princes over the years. He served for several decades as a tank commander in the Saudi army rising to be commander of the Saudi Land Forces command. By placing the son of Bandar bin Adul Aziz in the top Saudi spy position, Abdullah strengthens his ties to a senior part of the royal family that will have a vote in future succession scenarios.

Khaled is experienced in national security and foreign affairs. He fought in the liberation of Kuwait in 1991 and was awarded a medal for his service from the Kuwaiti emir. He is also a recipient of Pakistan’s highest award, the Hilal-i-Imtiaz or Crescent of Excellence awarded by former Pakistani President Asif Zardari for his work in promoting Saudi-Pakistan relations, the kingdom’s most important alliance. As commander of the Royal Saudi Land Forces, Khaled also chaired the Russia-Saudi joint military committee. He has commanded Saudi forces fighting Houthi rebels on the Yemeni border.

In 2013, Khaled left the army to become governor of Riyadh, one of the most important positions in the kingdom because Riyadh is home to most of the royal family and foreign embassies. He was succeeded in that job in May by Abdullah’s son Prince Turki bin Abdullah, and then served for only 45 days as deputy defense minister before being relieved from that post to become spy chief.

The post of Saudi General Intelligence chief is an important one in the kingdom. For decades, it was held by Prince Turki bin Feisal, who was a key player in planning and financing the war in Afghanistan in the 1980s that led to the defeat of the Soviet 40th Red Army and the fall of the Berlin Wall. The post was then held by Prince Muqrin, now deputy crown prince and third in line to the throne. Subsequently, it was held for two years by Prince Bandar bin Sultan, former ambassador to the United States for 22 years.

When Bandar bin Sultan left Saudi General Intelligence last April many believed his career was over. Those assessments were premature. On July 1, the king also appointed him as senior adviser and his special envoy. Bandar accompanied Abdullah for his 45-minute visit to Cairo last week to congratulate Egyptian President Abdel Fattah al-Sisi on his inauguration. Bandar has very close ties to Sisi and played an important behind-the-scenes role in the coup that brought him to power a year ago.

Bandar bin Sultan is a subject of constant rumor mongering and speculation in the region. In 2012, Israeli press reports claimed he had been assassinated in a bomb attack on the Saudi General Intelligence headquarters in Riyadh by the Iranian intelligence service. This June, Lebanese press reports claimed he had been injected with poison, was comatose and rushed to a hospital in the United States. He does suffer from severe back injuries from his days as a Saudi air force pilot and a range of other illnesses, but like a cat he seems to have nine lives.

At the end of June, Abdullah presided over a meeting of the Saudi National Security Council (NSC) to order all necessary measures be taken to defend the kingdom from the Sunni terrorist group ISIS that has now overrun one-third of Iraq and part of Syria. Bandar bin Sultan also serves as secretary-general of the NSC.

ISIS has proclaimed the creation of a caliphate in the areas it occupies and now calls itself simply the Islamic State. With the announcement of a caliphate by ISIS it also announced the “real” name of its leader, Abu Bakr al-Baghdadi, who previously was known only by his nom de guerre. Baghdadi's real name is Ibrahim ibn Awwad ibn Ibrahim Ali ibn Muhammad al-Badri al-Hashimi al-Husayni al-Qurashi. Thus, he is a descendent of the prophet (which is of course important to being a caliph), and he comes from the same tribe (Qurash) and the same family (Hashemites) as Prophet Muhammad. One of Baghdadi’s predecessors as head of al-Qaeda in Iraq also claimed this pedigree, Abu Omar al-Hashimi al-Qurashi al-Baghdadi, but he died in office.

For the Saudis the proclamation is tantamount to a declaration of war. The king is also the custodian of the Two Holy Mosques, protector of the most important holy cities of Mecca and Medina in the Islamic world. The last contender for a caliphate was the Ottoman Empire that lost the mosques and the Hejaz (western Saudi Arabia) to the Saudis after World War I. ISIS and Baghdadi are proclaiming they are the true heirs to leadership in the Islamic world — by definition then the Saudis are illegitimate.

The king’s announcements still leave open the position of deputy defense minister, a key portfolio since Crown Prince Salman also serves as defense minister, meaning the day-to-day management of the Ministry of Defense is vacant. Salman also has serious health problems, so a vigorous deputy is needed. Who the king appoints will be crucial not only for defending the kingdom at a critical hour but also in the complex royal family politics for future succession.