Saudi Arabia has remained quiet during the current Gaza war, working instead through Egypt. 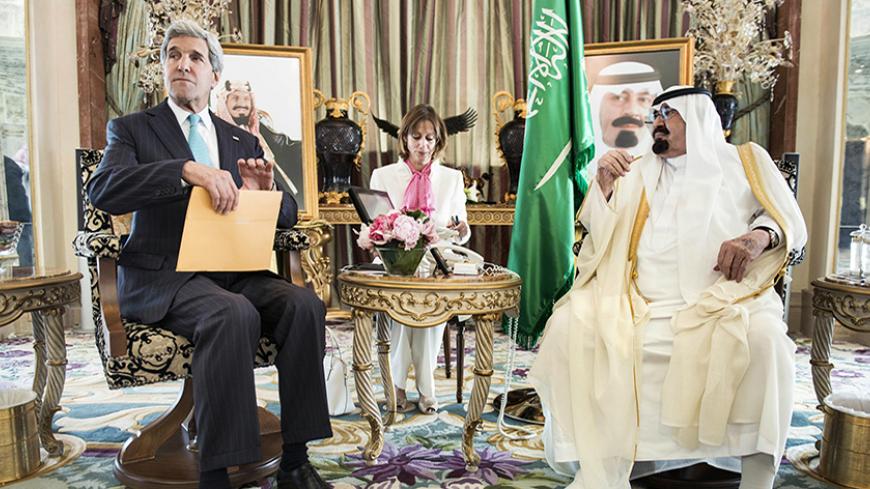 The Kingdom of Saudi Arabia has assumed a very low profile so far during the third Gaza war, speaking publicly rarely and primarily backing its Egyptian ally behind the scenes. Some have confused this quiet as a tacit entente with Israel against Hamas misreading the Saudi position; the kingdom increasingly regards the Netanyahu government as a criminal state.

The Saudis have been unusually taciturn for much of the Gaza war between Hamas and the Israel Defense Forces (IDF). The Saudi finance minister announced a $53 million grant for emergency aid to Gaza on July 14 to help the victims of “brutal Israeli aggression,” but the king did not speak out personally until Aug. 1. King Abdullah bin Abdulaziz then denounced Israel for committing a “war crime against humanity” and engaging in a “collective massacre.” He did not specifically mention Israel, but the official Saudi press made clear he meant Israel in general and Prime Minister Benjamin Netanyahu in particular. The king never mentioned Hamas at all, but he did speak a great deal about “terrorists” who “distort the pure and humane image of Islam.” The Saudi press has explained those remarks as applying to al-Qaeda and the Islamic State (IS), not to Hamas. He did say the worst kind of terror is state terror, another reference to Israel in Saudi speak.

The former head of Saudi intelligence, Prince Turki Al Faisal, wrote for Al-Monitor on July 25 that Israel’s actions in Gaza are a “barbaric assault on innocent civilians” and were destroying any chance for implementing the Saudi peace plan for a two-state solution. Prince Turki, who is today a private citizen and always candid, did strongly criticize Hamas for many “mistakes,” especially its “ill-advised alignment with Qatar and Turkey,” both of whom have backed Hamas more vigorously. The Saudi ambassador in London wrote a public letter criticizing those who suggested any collusion between Israel and Saudi Arabia in Gaza as “utter rubbish” and “baseless lies.” Prince Nawaf accused Israel of “genocide” and “a crime against humanity” in Gaza. He was responding to right-wing Israeli press reports alleging contacts between Saudi national security adviser Prince Bandar and the head of the Mossad and British press reports also asserting back-door collusion.

The Saudis' major goal in the Gaza war is to support their protege and ally Egyptian President Abdel Fattah al-Sisi, whom the Saudis helped put in power a year ago and whom they keep in power with billions in economic grants. Riyadh and Cairo now despise the Muslim Brotherhood. Since Hamas is the Palestinian offshoot of the Egyptian Brotherhood, Sisi wants to see it humiliated. This is the major difference between this Gaza war and the last Gaza war in 2012 when the then-Brotherhood controlled government in Cairo supported Hamas.

Abdullah and the other royal princes in Saudi Arabia are well aware that many Saudis, especially young people, admire Hamas for fighting against Israel. The royals are not eager to appear soft on Israel especially when gruesome images of dead children are appearing every night on Arab television.

Israel and Saudi Arabia have colluded in the past when their interests coincided. The best example is Yemen in the 1960s when they each supported a royalist insurgency against an Egyptian occupation army. The Mossad parachuted supplies to the royalists while the Saudis provided sanctuary to them so they could bog Nasser’s Egypt down in an Arabian Vietnam. The Mossad and Saudi intelligence cooperated indirectly via British mercenaries, but the Saudis always refused to meet the Israelis face to face.

The Israelis and Saudis were also on the same side in the Cold War against the Soviet Union. Despite what the movie "Charlie Wilson’s War" leads you to believe, however, they did not cooperate in the final and decisive battle of the Cold War, the campaign in Afghanistan waged by the mujahedeen against the Soviet 40th Red Army. In fact, the Saudis vetoed any Israeli role in the Afghan war when the CIA and Congressman Wilson raised the idea.

The Saudis and Israelis have more often been on opposite sides of Middle East conflicts. The kingdom backed Iraqi President Saddam Hussein in the Iran-Iraq war, for example, while Israel backed the ayatollahs of Iran. King Fahd was adamant that Israel stay out of the Kuwait war in 1991. The kingdom today finds it very awkward to be in the same camp as Israel in calling for tough measures to ensure Iran does not get a nuclear bomb.

Saudi reluctance to partner even indirectly with Israel reflects both strategic and tactical considerations. The kingdom is a strong supporter of Palestinian rights; from firsthand experience I can attest the king is particularly committed to the Palestinian cause. He scolded US Secretary of State Colin Powell for US support to Ariel Sharon in the second intifada in a Paris meeting and almost accused the secretary of being a party to war crimes then.

The Palestinian issue has great resonance with average Saudis. It has been the main irritant in the US-Saudi relationship since it began in 1945 when President Franklin D. Roosevelt met King Ibn Saud in the Suez Canal to create the oldest US partnership with a Middle East state. In 1973, of course, King Faisal cut off oil exports to the United States over the Arab-Israel conflict, the lowest low point in the relationship’s history. US-Saudi relations have historically thrived when the Americans are actively and successfully engaged in promoting peace between Israel and the Palestinians.

Tactically, the Saudis do not trust the Israelis to keep secrets. One Saudi prince once told me the Israelis are like “cheap tarts” who can not keep their mouths shut about their trysts. They undoubtedly suspect the Israeli right wing is actively promoting talk of collusion today to make life more difficult for the king.

The king's Aug. 1 speech also laid out his main priority today, which is fighting the growth of al-Qaeda and its offsprings on the kingdom’s borders. The creation of a self-proclaimed caliphate in Iraq and Syria by IS is a direct challenge to the monarchy’s legitimacy, if there is a true caliph then the king and the House of Saud are usurpers wrongly ruling Mecca and Medina. Saudi forces have been reinforced on the Iraqi-Saudi border as IS has advanced this summer. In the south, al-Qaeda in the Arabian Peninsula (AQAP) attacked a Saudi border outpost this summer and despite an enormous Saudi effort over six years now AQAP is far from defeated. Indeed, Yemen is becoming less stable with AQAP in south Yemen still dangerous and pro-Iranian Zaydi Houthi rebels controlling more and more of northern Yemen on the Saudi border. The Saudis have fought several border conflicts with the Houthis.

The coup in Egypt is the most positive development the king has seen in the region since the start of the Arab Spring. Abdullah has staked the kingdom’s pocket book behind keeping Sisi in power and that determines his Gaza policy. As for Netanyahu, the Saudi ambassador to the United Kingdom laid out the kingdom’s policy when he wrote Netanyahu “will answer for his crimes before a higher authority than here on earth.”