Israeli Prime Minister Benjamin Netanyahu provoked a coalition crisis this week, signaling that though normally he shies away from elections, with his sinking popularity, his best bet might be running to the voting booth now. 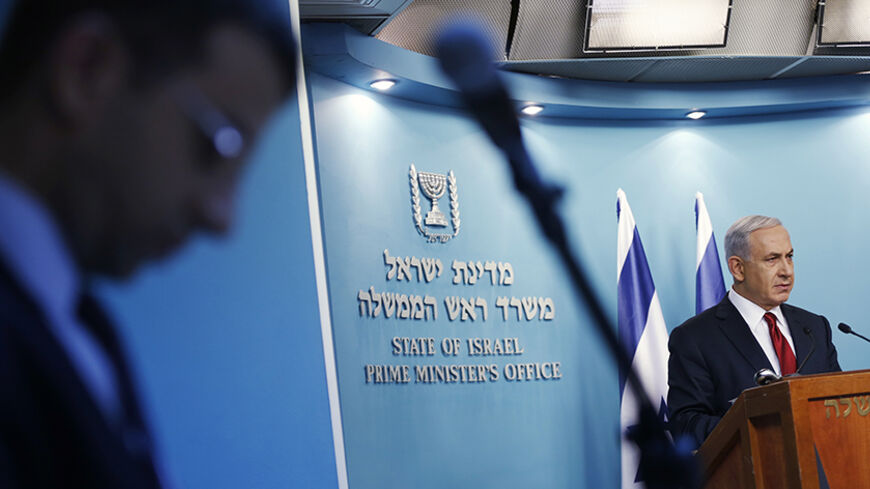 Israel is a country well accustomed to imbroglios and complex political circumstances, but it seems that the current situation faced by Prime Minister Benjamin Netanyahu’s government breaks all previous records. Until about half a year ago, everyone thought that Netanyahu (Bibi) would rule eternally; his name alone shone at the top of the survey tables. No one else even approached the relatively high ratings Netanyahu received from the public, especially regarding the critical question asked in Israeli opinion polls: the candidate’s suitability for the role of premier. Netanyahu was practically alone, almost reaching 50% when those next in line received only single-digit numbers.

The first and most important was the shattering of the relative sense of security enjoyed by Israelis in the last six years of Netanyahu’s rule. During the Protective Edge campaign, residents of the Tel Aviv and central Dan area were also subject to the wrath of rockets, and Israel’s most important (and only) metropolis became an area under fire for many long weeks. While this reality lapsed at the end of the summer, its memory remains indelibly etched in the hearts and minds of many Israelis. Until recently, Tel Aviv was viewed as immune to security threats, with the notable exception of the first Gulf War (1991) when, for a short time, Saddam Hussein launched several dozen Scud missiles on Israel. Tel Aviv is an Israeli bubble, teeming and bustling with life and cultural activities, enjoying a hedonistic and cosmopolitan atmosphere. And then all that went up in the smoke of the rockets fired from the Gaza Strip. Luckily there was almost no loss of life, thanks to the unbelievable success of the Iron Dome air defense system, but hundreds of thousands of Israelis inhaled the scent of asphalt several times each day, when they were forced to lie face down on the roads every time an alert was heard. Each time, they covered their heads with their hands and hoped that the Iron Dome would succeed in its mission this time as well.

After the summer's war, Netanyahu’s ratings practically plummeted to half their original level regarding the critical question of "suitability for the role of premier." He has not clambered back up to his original spot — on the contrary. The prime minister has also plummeted in the survey that assesses the number of mandates his party will receive. But the most worrisome issue, as far as Netanyahu is concerned, can be discovered in the additional question that was posed in recent surveys: “Are you in favor of Prime Minister Netanyahu being re-elected for another term of office?” In a poll conducted at the end of October, more than 60% of the respondents answered that they were not in favor. This is a negative critical mass that is forming around Netanyahu.

The problem is that there is no alternative to Netanyahu. For the first time in ages, Israel has a political legacy to bequeath, but there are no heirs, no successors. The merchandise lies on the floor waiting for someone to pick it up, but no one comes. At the moment, the Netanyahu government lurches from one crisis to another. The budget has not been passed yet, a dramatic vote on the radical nationality bill is due to be held Nov. 26. The bill was submitted by Knesset member Ze’ev Elkin (Likud) but the Hatnua and Yesh Atid ministers — under the leadership of Justice Minister Tzipi Livni and Finance Minister Yair Lapid, respectively — are expected not to support this bill. If they vote against it, Netanyahu will fire them immediately and Israel will face new elections. A loud verbal ruckus erupted Nov. 23 between all the parties regarding this bill.

According to the left-wingers, this law would upset the delicate equilibrium that exists between a Jewish state and a democratic state, the two Israeli cornerstones. This law would also adversely affect minority groups and democracy itself, and place Israel at the top of a very slippery slope. Netanyahu could have come up with compromises, he could have postponed the issue; he had a lot of exit points he could have used to skirt the crisis. Yet instead, he chose to continue to push both sides to the edge. Could it be that he wants new elections? Netanyahu never wants elections and has more than two full years left for a full term of office. But Netanyahu also reads the surveys, and also understands numbers. Perhaps he wants to cut his losses and run to the voting booth now.

To all this we have to add the strange intifada that has erupted in Jerusalem and threatens to seep out to other areas. It further erodes the lost sense of security of the Israelis; a perception that, until now, was Netanyahu’s No. 1 electoral asset. When the Fitch Ratings agency lowers Israel's credit rating and warns about its future credit rating, this harms Netanyahu's second asset, which is Israel’s relatively stable economic condition. Now the emperor-premier has lost almost all his clothes; Netanyahu is deprived of all his electoral assets, is trying to retain his diminishing support and forced to decide where he goes from here.

Another problem, surprising and worrisome, rises from Netanyahu’s right. Minister of Economy and Trade Naftali Bennett — the young man who only recently emerged into Israeli politics — chips away at the Likud Party mandates. In recent polls, Bennett has almost reached parity with the Likud regarding the number of mandates. Bennett exploits the continued rightward movement of the Israeli electorate, a shift that takes place every time the security issue rises to the national agenda. Operation Protective Edge, the Jerusalem intifada and friction with Arab-Israelis pull the average Israeli voter to the right. But if the term “pulling to the right” used to mean turning directly toward Netanyahu, today’s voters prefer the young, fresh, focused Bennett, who speaks in a high-tech Tel Avivian language and reaches nonreligious sectors, too.

Or Foreign Minister Avigdor Liberman, who (unlike Netanyahu) does not mince words or use circumlocutions when talking about Hamas, Gaza or Arab Israelis. If this phenomenon continues (and there is little reason that it shouldn’t), then Bennett will head the largest Knesset party in the coming elections. This is no less than a political earthquake. Bennett is an extreme rightist, a religious ideologue who opposes any kind of peace process, a Palestinian state or any kind of concessions on any front. But at the moment, when the ultra-Orthodox factions still plot taking revenge on Netanyahu, Bennett is his only political ally. There is some chance that when elections near (whether in the coming months or toward the end of next year), Netanyahu will pressure Bennett to run in a joint list — in a similar format to the one used by Netanyahu and Liberman in the last elections.

From Bibi’s viewpoint, this is his last chance to serve as prime minister for yet another term.

Meanwhile, on the opposite side, all the other Knesset factions are gathering to create the “Anyone But Bibi” coalition. That group includes Yitzhak Herzog (Labor), Lapid (Yesh Atid), Livni (Hatnua), Liberman (Yisrael Beitenu), Shaul Mofaz (Kadima) and even the new party of former Likud Minister Moshe Kahlon (there’s a good chance that former Interior Minister Gideon Saar, another former Likud Party member, will join forces with Kahlon).

After the elections, none of them will probably recommend Netanyahu to the president as the person who should be mandated with assembling a coalition. Thus, the prime minister's future now depends on the number of joint mandates that he and Bennett could bring, and the tremendous efforts he invests in his attempts to bring the ultra-Orthodox members back into the government and renew the historic alliance with them.

These are difficult days for Netanyahu. He's surrounded by problems, his support is collapsing and even his status in the Likud is far from what it once used to be. The man who, until recently, was “King Bibi,” is now trying to figure out how to salvage his rule. At the moment, his odds for success are ambiguous.