Israelis look for 'anyone but Bibi'

Support for Prime Minister Benjamin Netanyahu has dropped sharply and his opponents are joining forces against him, thus threatening the possibility of his becoming prime minister for the fourth time. 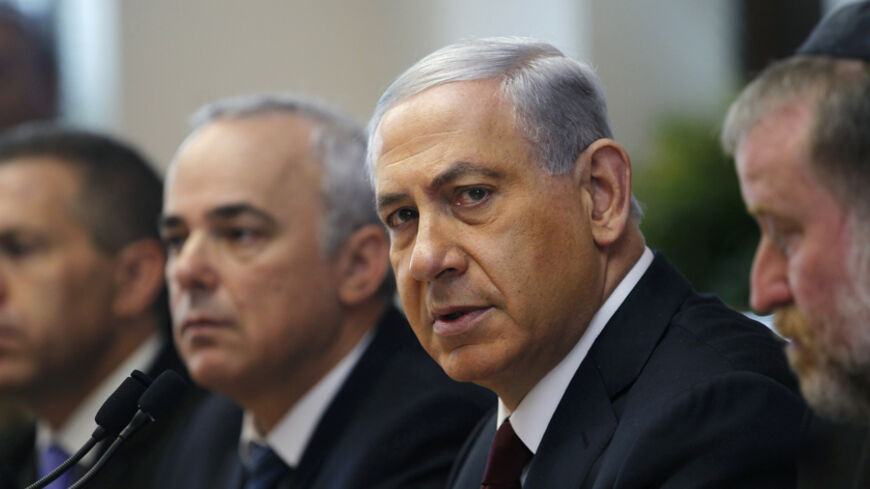 Public opinion polls just conducted in Israel indicate a steep drop in the popularity of Prime Minister Benjamin Netanyahu. It may be a temporary process, it may be a transient phase, but as of this very moment the numbers do not lie and reflect a clear trend. Support for Netanyahu is in steep decline.

The results of two surveys publicized in Israel, one for the “HaMate” program on Israeli TV Channel 10 and the other for the Knesset TV Channel (“Panels”), point to an amazing fact: more than 60% of the Israeli public does not want Netanyahu to serve another term as prime minister. Almost two-thirds of the Israeli electorate have had enough of Netanyahu. Netanyahu’s key strong point is rooted in the popular question asked in Israeli polls: The respondents are asked regarding the suitability of various candidates for the premiership role. Until recently, Netanyahu led on this question with a tremendous gap over his competitors. His score ranged around 45-50%, while his competitors were in single digits. But in the last poll by the Knesset channel on Oct. 29, the percentage of “suitable for the position” voters dropped drastically to only 27% (in comparison, Netanyahu garnered 48% after the Protective Edge campaign). The man lost half of his support within a few weeks.

And the tidings aren’t encouraging for the premier regarding the number of Knesset seats that Netanyahu’s Likud Party is likely to receive: At the moment, the Likud would win only 21 seats. In addition, the Likud historically tends to lose around four additional seats in the course of the Knesset election campaign (due to the problematic primaries process and an anti-Netanyahu campaign). In such a setup, it would be altogether possible that, should Knesset elections be held in a few months, Netanyahu might win only 15 to 17 seats. With such a result, it is doubtful that he would be able to assemble a government.

On Nov. 3, popular Likud Interior Minister Gideon Saar submitted his resignation from the government and the Knesset. Saar is yet another one to resign in disappointment over Netanyahu’s conduct. His resignation lowers the Likud seats in the current Knesset from 19 to 18. The person benefiting from the free-for-all is Foreign Minister Avigdor Liberman: The next in line in the joint Knesset list would be a Knesset member from his party. Since the joint Liberman-Netanyahu list has been dismantled, Netanyahu now has only 18 seats in the Israeli parliament. Meanwhile, Finance Minister Yair Lapid, leader of the Yesh Atid faction, has 19 seats. Behold the wonders of Israeli politics: The Likud is no longer the largest party in the Knesset.

These facts prove again that the magical political power attributed to Netanyahu is largely fictitious. President Barack Obama has been quoted in the past as lamenting that Netanyahu is more popular than he. True, Obama’s popularity has also been dropping, but there is one important difference between the two: Obama’s position is guaranteed until January 2017, while Netanyahu’s throne can collapse under him at any given moment. “King Bibi,” Netanyahu’s coronation slogan on the front-page of Time Magazine on May 28, 2012, is dissolving in front of our eyes. Bibi is a king without a kingdom, hated by most of his subjects, surrounded by political rivals who aspire to remove him from his seat and drained of energy and new tidings.

In the background of this overview, one fact is especially dumbfounding: that there is no one to come and take the leadership scepter away from Netanyahu. The leadership vacuum in Israel is an accomplished, incredible fact that warrants research by historians, sociologists and perhaps even police officers. There is a combination of factors at work here: a series of actions adopted by Netanyahu himself and his people who helped him establish a firewall around the political system and neutralize all potential rivals, one way or another. Former Prime Minister Ehud Olmert is fighting with the last of his strength for his personal freedom after he was convicted and sentenced to a prison term of six years. The former “great white hope,” retired chief of staff Gabi Ashkenazi, became embroiled in a bizarre affair that led to an even more bizarre investigation, which probably will not produce anything. But meanwhile, these proceedings have denied Ashkenazi a post-Israel Defense Forces momentum and have stained his reputation. Several years ago, Israel legislated a draconian and undemocratic cooling-off-period law: Those who leave the security establishment must wait three long cooling-off years before jumping into the political cauldron. If we connect this to the one-year acclimation period given to generals (with full pay and inflated conditions) before they remove their uniforms and return to civilian life, we have an impassable barrier of four long years. This is an eternity to the Israeli mindset.

The hot name being bandied about in Israel at this time, someone who could really challenge Netanyahu’s leadership, is that of former Shin Bet chief Yuval Diskin. To the disappointment of many, Diskin announced, when he appeared Nov. 3 before kibbutz members in the country’s south, that he has no intention of joining politics in the coming election campaign. Diskin was an illustrious Shin Bet chief, his political views are center-left, he is untainted by any scandal and he demonstrates surprising leadership skills. He attacks Netanyahu in public appearances and Facebook articles twice a week. Diskin’s blows harm Netanyahu’s soft underbelly, but there is no one to leverage these blows, no one to exploit them. Currently, no public figure exists who is capable of transforming himself into an “anti-Bibi” the way Justice Minister Tzipi Livni did in 2009 or Lapid did in 2013.

What we do have is an “Anyone But Bibi” almost wall-to-wall coalition that unites many parties and elements in Israeli politics today. Some of the members of this coalition are: Lapid, Livni, head of the opposition Isaac (Buji) Herzog and the former Likud Minister Moshe Kahlon, who has announced the founding of a new party. Then there’s Liberman, who has an even worse opinion of Netanyahu than the others (perhaps because he knows him from up close). In recent months, secret and intensive contacts have been taking place among all the members of this unofficial coalition. On the agenda: unification, either before elections or after them. The one playing a key role in these contacts is opposition chairman and head of the Labor Party, Knesset member Herzog, who is trying to coax Livni and Lapid to join up into one center-left bloc. Lapid, who at the height of his electoral strength distanced himself from the “left” moniker as he would from the Ebola epidemic, is beginning to rethink his position. On the other hand, the odds that this bloc will materialize before elections are not clear. Kahlon, the new rising force and one of Netanyahu's outcasts (who already has 10 flattering seats in the polls without even conducting a serious campaign), is also a welcome client in such a coalition.

One thing is sure: A record number of elements and political rivals want to see Netanyahu’s downfall. Even a number of politicians in his own party, the Likud, hope that he disappears from the radar. All these factors, combined with a fast-declining popularity and the ultra-Orthodox resentment against him (those who traditionally constitute a deciding factor in the setup of Israeli governments), are likely to consolidate the critical mass needed to halt Netanyahu’s continued title role as Israel’s premier. In other words, should elections be held in the coming months — and many commentators and politicians calculate that this may well come to pass — Netanyahu is in trouble.