The recent decision of the Lebanese parliament to extend its term for another 31 months, without holding elections, might be a step to put the country under foreign tutelage. 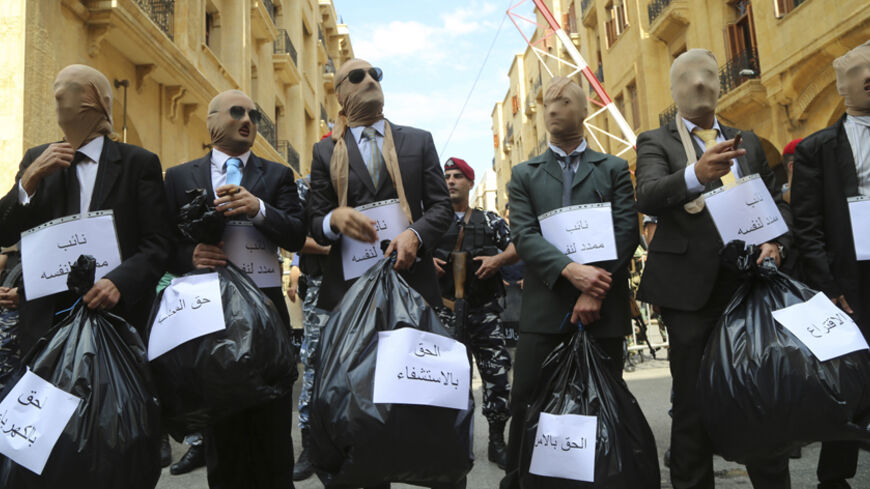 Lebanese activists dressed as politicians, their heads covered in stockings, carry plastic bags during a demonstration against the extension of parliament's term, near the parliament building in downtown Beirut, Oct. 1, 2014. - REUTERS/Sharif Karim

A few days ago, a Lebanese law student at one of Beirut’s universities posted on her Facebook page, “I think we can no longer find the word ‘election’ anywhere, except in the dictionary. Perhaps it is just a word from an ancient and obsolete language. At best, we might come across it in the courses we took about constitutional law, but it is definitely a strange practice for Lebanon!”

The student was referring to a commonplace phenomenon in Lebanon these days. The presidency has been vacant since May 25, and the parliament has failed to elect a new president. Instead, on Nov. 5, that same parliament decided to pass a law that extended its term for 31 months, to end June 20, 2017. In May 2013, the parliament had extended its term that was supposed to end in June 2013 for 17 more months. By doing so, it canceled the parliamentary elections that were supposed to be held last spring and ensured a complete four-year term for its MPs elected in 2009.

Just like the parliamentary and presidential elections, the student elections were also suspended by the administrations of some Lebanese universities, claiming that the security situation and the political disputes among students prevent them to choose their student council representatives.

This scene, which reflects the paralysis of political and democratic life in Lebanon, is highly paradoxical. To begin with, the countries surrounding Lebanon, despite their unstable security situation, far worse than Lebanon’s, have witnessed a series of remarkable electoral processes. Regardless of whether they were valid or safe or whether the international or local community recognized their results, they still took place. Syria, which has been struggling with a violent war for three years now, held parliamentary and presidential elections, as did Iraq. Even Libya, which is in chaos, called on its citizens to vote in unprecedented elections.

The paradox is even more blatant when we realize that during that same period, Lebanon organized the voting process for foreigners residing on its territories. Egyptians voted in Lebanon during the Egyptian elections, and so did Iraqis. Thousands of Syrians who were displaced to or residing in Lebanon participated in the Syrian elections. Throughout all these non-Lebanese elections, the Lebanese authorities handled the foreign electoral processes. Meanwhile, Lebanon — a country known for its democratic practices compared to neighboring countries — is unable to hold its own presidential and parliamentary elections, or even its university student elections.

This all takes us back to the past two decades, when the Syrian military was in Lebanon and had full control over all of the state institutions from 1991 to 2005.

Back then, there was an international insistence that political and democratic life must go on, under a slogan that was often repeated by diplomatic representatives of Western countries in Beirut: “The elections [must be held] right now.”

Nearly 10 years following Syria's withdrawal from Lebanese territory and the start of the so-called “second independence era,” — independence from the French mandate happened in 1943 — the Lebanese have found themselves unable to exercise parliamentary democratic practices and to firmly establish the power rotation principle under the constitution through popular vote.

Nevertheless, the worst of these paradoxes is that the recent parliament’s extension happened for a relatively long period of time. This will freeze political life in Beirut until the spring of 2017, unless a particular development takes place — which everyone knows is not going be internal. Consequently, it is an explicit declaration that Lebanese political life is dependent on external developments and their effects, and that the country has voluntarily entered an undeclared foreign tutelage era, this time without the presence of a foreign military.

Ironically, the second independence of Lebanon in 2005, as described by French authors Eric Aeschmann and Christophe Boltanski in their “Chirac d’Arabie,” started with the French and US presidents, Jacques Chirac and George W. Bush, meeting on the sidelines of the 60th anniversary of the D-Day landings in Normandy, in June 2004. On that day, Chirac told his US counterpart: You were right in your efforts to bring democracy to the Arab world. We believe that the best way to do this is by promoting the only democracy in the region, which exists in Lebanon. And to achieve this, we need to work together to take President Bashar al-Assad out of Lebanon and ensure that presidential and parliamentary elections are held in a free environment.

The US-French plan has succeeded. Syria left Lebanon. Democratic elections were held in the Arab world. Yet today, Lebanon seems unable to restore or practice the democratic process it preaches.