Lebanon between Obama and Hollande

Similar to the convergence between the United States and France over Lebanon in 2005, one between Presidents Barack Obama and Francois Hollande may soon help Lebanon gain a new government and president. 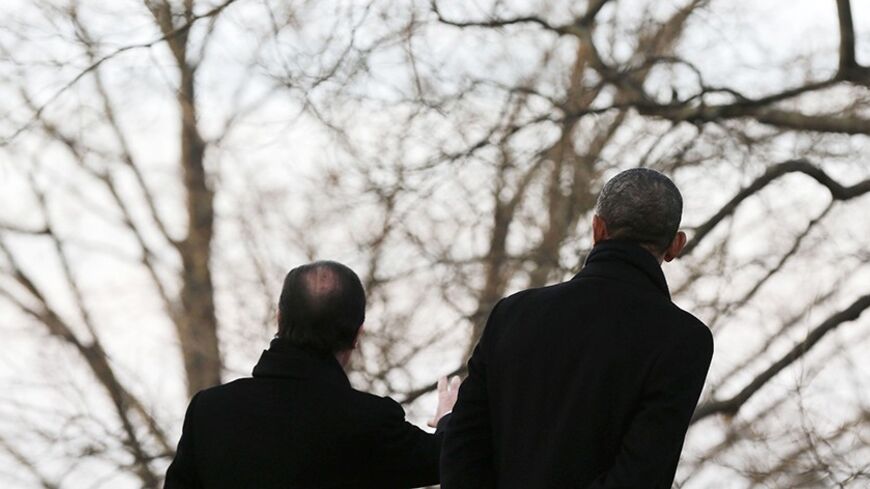 There is no doubt that Lebanon was a top priority in the bilateral talks between US President Barack Obama and French President Francois Hollande as the latter began a state visit to Washington Feb. 10. This is not surprising since the Lebanese file has become part of the Syrian file, which is grabbing all the attention and most diplomatic efforts.

The links between the Lebanese arena and events in Syria are clear to all. Hezbollah’s fighting in Syria has brought down the Lebanese government, paralyzed its institutions and is now making a presidential vacuum likely. Even more seriously, Hezbollah’s intervention has added to the war's sectarian dimensions.

Syria is now a magnet for religious extremists as well as the scene of violence and terrorism. The fire of civil strife has now undone Lebanon’s fragile stability. Successive explosions have hit residential neighborhoods, and Lebanese diplomats and political leaders have been assassinated, most recently Mohammed Chatah on Dec. 27. The language of killing and counterkilling is now prevalent in Lebanon. The same is true of Iraq, and it may spread to other parts of the region.

Obama and Hollande are aware of this last possibility, but have the same objective — to maintain stability in the Middle East, the world’s primary oil reservoir. Both have said that it is necessary to fight terrorism and prevent the growth of religious fundamentalism. It is true that US and French policies in the Middle East do not entirely match and that the two recently further diverged. It is also true, however, that a French-US partnership exists in several areas, most notably in supporting the Syrian moderate opposition and in tirelessly working to protect Lebanon from the conflict in Syria. This was expressed by Obama and Hollande in an article they co-signed in the Feb. 10 Washington Post.

Both their countries are pushing ahead with their diplomatic efforts in Lebanon. The latest attempt to shake Lebanon out of its constitutional paralysis and facilitate the formation of a government, which has been gridlocked for nearly a year, is the clearest evidence of this. Both Paris and Washington have played a pivotal role in this regard. Then, suddenly, Foreign Minister Sergey Lavrov of Russia, who is close to Damascus and Tehran, visited former Prime Minister Saad Hariri Jan. 12 at his residence in Paris. Shortly thereafter, on Jan. 26, US Ambassador to Lebanon David Hale traveled to Riyadh to promote a settlement for a Lebanese government. Hopes for success were based on the flexibility that the Iranian side had shown before the recent Geneva talks.

France and the United States pull a lot of weight on the international scene, and each has its own style, but no country possesses anything comparable to the United States' power and influence. France, however, appears recently more present in the Middle East. It is as if Paris is trying to compensate with diplomatic momentum and more intense involvement in the affairs of the Levant, for historical reasons.

There is no doubt that France is trying to take advantage of the declining US presence in the region as a result of the Obama administration’s foreign policy review. Previously, France had tried to take advantage of US military power, standing with Washington in the lead-up to a military strike on Syria at a highly sensitive historic moment.

France had agreed to provide any potential US airstrike with European and international cover, this after the United Kingdom let down the United States in this regard. In the end, Obama changed his mind about the strike after Hollande had made preparations, leaving him to face a torrent of criticism from within France as well as abroad. Washington did not forget the price incurred by the French president as a result of Obama’s U-turn. To make up for it, Hollande was warmly greeted during his US visit.

France does not stand frozen or alone in the Middle East, but has pursued an alternative to US capabilities and effectiveness. Paris strengthened its relationship network in the region, particularly its alliance with Saudi Arabia. The French-Saudi axis became apparent in two areas — the Lebanese file, supporting the Lebanese army and president, and the Syrian file, supporting the moderate Syrian opposition politically and on the ground. The most significant achievement was the French-Saudi program to arm the Lebanese army with $3 billion worth of French arms.

It was not the first time that French and US interests had converged on Lebanon, which, more than any other country, had been a model of partnership between Washington and Paris. That relationship saw its golden days under Presidents George W. Bush and Jacques Chirac. Their cooperation peaked in the wake of the assassination of Prime Minister Rafik Hariri in 2005 and its effects on the Lebanese arena. The full commitment of both men to the Lebanese file and their cooperation helped trigger the Cedar Revolution and forced the withdrawal of Syrian troops in April 2005.

Each had his own reasons for the partnership. Bush saw in the Cedar Revolution the first achievement of his democracy agenda. Chirac was angered by the assassination of his friend Hariri and exerted extraordinary energy to prosecute those accused of the killing. His efforts culminated in the Special Tribunal for Lebanon, which, without Chirac’s relentless pursuit, would have never seen the light of day.

Things, however, are different today. The Lebanese file is no longer apriority, but the US-French partnership remains. Obama likes to share the burden with partners, especially as his appetite for outside intervention is small and because he has taken it upon himself to withdraw troops from some of the Middle East's hotspots, i.e., Iraq and Afghanistan.

Obama might therefore welcome the French role in Lebanon even if it means sitting in the back seat. He is known to be fond of the “leading from behind” approach, and the logic of this partnership intersects with Obama’s doctrine of multilateralism in international policy.

The US-French partnership intersects with Saudi Arabia, a mutual ally, even if Riyadh was a little dismayed by the United States' openness toward Iran. Saudi Arabia made no secret of how much it resents Iran’s direct intervention in support of the Syrian regime, Hezbollah’s actions in Lebanon and Prime Minister Nouri al-Maliki’s actions in Iraq. Saudi Arabia still has doubts about opening to Tehran.

Lebanon is the arena most suitable for a French-US-Saudi partnership. It is a multilateral partnership with multilateral roles. The partners at least agree on the need to restore balance to the Lebanese equation, even if reorganizing Lebanon will not be achieved in the next few days, which would mean forming a government and electing a president according to the constitutional deadlines.

Such an achievement requires a settlement with another party, specifically Iran, which is still absent from the Geneva II table, probably because Iran has not yet been rewarded for agreeing to the first Geneva conference or because it is still betting on the military option.

Lebanon will be hanging in the balance as it awaits this settlement.