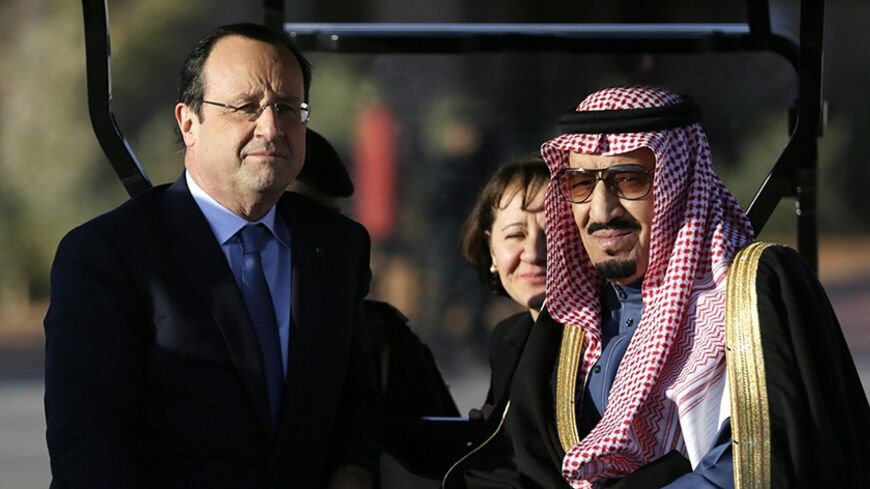 The Saudi decision to give $3 billion in aid to the Lebanese army to purchase French weapons and ammunition came as a surprise to both supporters and opponents of the move. The amount is the highest ever to the army, but the most alluring aspect of the initiative is not limited to the allocated sum. In fact, rarely has the Lebanese state received any donations. Rather, the bigger surprise is the emerging Saudi-French partnership, which constitutes a turning point in the Middle East. With the shrinking US role in the area, a void has opened that regional forces and terrorist organizations from everywhere are rushing to fill.

Lebanese President Michel Suleiman announced the aid in a message addressed to the Lebanese people. This presentation indicated that the three parties had coordinated the matter and that the foundations of an international security network are being laid to protect this small country tottering on the edge of an abyss.

On the one hand, the ghost of sectarian strife has spilled over from Syria, lurking on the horizon and occasionally bursting onto Lebanon’s streets and cities. On the other hand, a constitutional vacuum is threatening the entirety of the Lebanese Republic — its institutions and the state as well — if continuity in power is not achieved when Suleiman's term ends in May 2014. Najib Mikati’s resigned government has lost all the components of legitimacy its authority was once based on. It is no longer possible to form a government that includes all Lebanese parties, because the country's constitutional institutions have become dysfunctional. With each passing day, the rift grows wider.

The president has only one option, which is to form a government, but he already knows that it will not be approved by all parties. Hezbollah will definitely object and has already begun issuing threats. Such a decision needs international support, and the Saudi-French initiative might be the first step in that direction. Supplying the army with aid and the president’s declaration of this assistance symbolize support for Lebanon's legitimacy, which is being threatened by the void.

The Saudi-French rapprochement also has regional dimensions. France is returning to the Levant after being forced to exit as an occupation force. This occurred in stages, in the aftermath of the two world wars when the Syrian people launched an Arab revolution and national jihad in the name of defending Islam and Arabism. Paradoxically, France has returned to the Levant through a Syrian door and in partnership with Saudi Arabia, the Land of the Two Holy Mosques. Hence, it has Arab and Islamic cover, specifically Sunni assistance, and is joining in an undeclared confrontation against Iranian expansion anchored in the Shiite and Alawite presence in the Levant.

As for Lebanon, things were different for the French. The French mandate served as a guarantee for Christians and paved the way for the establishment of the Lebanese Republic, in which Christians had the upper hand. The relationship between the French and the Lebanese evolved to include all Lebanese under the banner of France’s so-called Arab policy, whose tenents were set out by Charles de Gaulle. French openness to Muslims reached its peak under former Prime Minister Rafik Hariri, an influential persona in the Arab and Saudi arenas who also had a close relationship with the former Gaullist French President Jacques Chirac. Saudi and French interests have always coincided when it comes to Lebanon, with both countries sharing the same view on supporting Lebanese legitimacy based on the Taif Agreement.

The rapprochement between Paris and Riyadh grew even stronger following Hariri’s assassination in 2005, as both sides supported the March 14 camp and the decision to establish the Special Tribunal for Lebanon. These two steps were supposed to restore balance to Lebanon, staggering under the weight of Iranian and Syrian tutelage. The partnership experienced a setback with the arrival of President Nicolas Sarkozy to power and the emergence of a Qatari-French connection at the expense of Syrian and Lebanese matters, but things soon returned to their former, familiar course in the wake of the Arab Spring and the escalation of the conflict with Iran.

The aid to the army is not the first time Saudi Arabia has offered Lebanon assistance. The Saudis have in several ways played a major role in supporting Lebanon politically and economically. It supported the country with its post-civil war reconstruction and backed its currency through deposits at the Central Bank of Lebanon. This is, however, the first time that Saudi support has been offered in partnership with France, which reflects its implications and dimensions at the regional level. Both countries fervently support the Syrian revolution to oppose the growing influence of Iran in the Levant, especially after the US-Iranian rapprochement. This latter convergence altered important balances and forced prominent regional forces, including Saudi Arabia, to find alternatives for the United States as partners in light of growing Iranian influence.

The French-Saudi partnership broke the vicious circle of Lebanese policy on support for the Lebanese army, in that everyone has said they wanted to support it, but nothing was ever done in this regard. The Americans, who have long backed Lebanese legitimacy and provided the army with training and equipment, were reluctant to provide it with quality arms for fear that they might fall into the hands of Hezbollah and thus pose a threat to Israel’s security.

Meanwhile, Hezbollah has always taken advantage of this paradox, which has hindered the army's capabilities and serves as a pretext for the party to preserve its arms in parallel with Lebanon's legitimate military forces as part of the national defense strategy. The breaking of the circle by the French and Saudis is therefore likely to face opposition and rejection.