Iran and Hezbollah's abrupt change toward the formation of a Lebanese government might be part of a regional settlement. 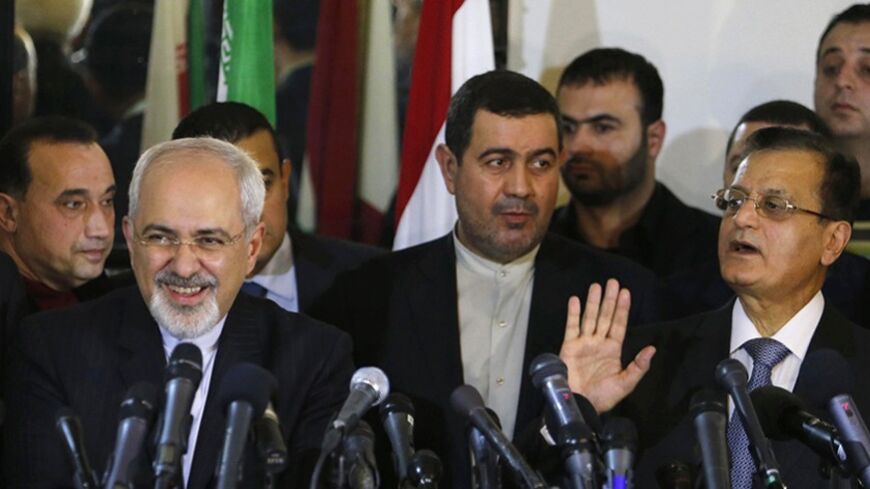 The most noticeable aspect of the visit by Iranian Foreign Minister Mohammad Javad Zarif to Beirut on Jan. 12 were the positions he took toward Saudi Arabia and Lebanese President Michel Suleiman, as they clearly contradicted those of Hezbollah, especially some of the Party of God’s recent stances.

Hezbollah has recently waged an anti-Saudi Arabia campaign, which included Hezbollah Secretary-General Hassan Nasrallah accusing Saudi intelligence of being behind the November 2013 bombing of the Iranian Embassy in Beirut. In addition, Hezbollah has launched harsh attacks against Suleiman, be it via repudiation of the Baabda Declaration or raising suspicions about the Saudi-French initiative to support the Lebanese army, the latter of which is considered to be an achievement for Suleiman. Hezbollah had also issued warnings against forming a “de facto government,” meaning a neutral government, which might be Suleiman's only option if Lebanon is to avoid a constitutional vacuum and further wandering into unknown territory.

Given Hezbollah's escalation, some of the statements by the Iranian foreign minister came as a surprise to observers. Zarif praised “the role of the president of the republic in providing [a climate] for consolidating unity and stability.” He also mentioned the “importance of good relations between Iran and the Arab states, especially Saudi Arabia, in order to establish stability in the region and protect it.”

A few days ago, Hezbollah, recognizing the positions to be taken by the spokesperson of Iranian diplomacy, had changed its stance on the formation of a Lebanese government. The party relinquished once steadfast demands that had become policy slogans — the “people, army, resistance” mantra and the “blocking third.”

The question today is this: Do the Iranian foreign minister’s positions, which were no doubt coordinated with Hezbollah given that the party changed its own immediately before Zarif’s arrival, have full official blessings, especially from Hezbollah’s hard-line sponsors in Iran? In this context, is the shift in Iran's position on the Lebanese file a maneuver, an offer or a gesture of goodwill, perhaps, in light of upcoming regional events, not the least of which is the Geneva II conference and the start of the Special Tribunal for Lebanon?

Another issue is whether Zarif’s positions reflect a shift or the start of movement toward a regional settlement, in particular with the Saudis, in which Lebanon represents the first station, hence facilitating the formation of a government and preparing presidential elections according to the timing set out in the constitution?

It is too early to know what exactly is behind the Iranian moves, but one must remember that Zarif’s maneuvering is part of a broad-based and comprehensive plan initiated with President Hassan Rouhani's rise to power. That plan aims to ease sanctions on Iran and show openness toward the West. There also seems to be no doubt that this plan has the approval, albeit cautious and conditional, of the supreme leader, Ayatollah Ali Khamenei.

Iran's policy of openness includes relations with its neighboring countries, as highlighted by Zarif’s recent trips to Gulf Cooperation Council states and the positive stances he has taken toward Saudi Arabia. It seems that Tehran's openness toward the Arabs is not only meant to complement its openness toward the West, but is also a condition of it. That would explain why Zarif took the positions he did in Beirut, despite the bombing of its embassy and the related accusations made ​​against Saudi Arabia.

Iran's policy of openness, which has begun to bear fruit, is at odds with the political escalation in Lebanon by its ally Hezbollah and the party’s military escalation in Syria. Moreover, betting on overturning the military power balance in Syria has not succeeded. While it is true that Iran's intervention in Syria has allowed Bashar al-Assad’s regime to stand fast and regain some territory, these victories have not, and may not in the future, change the regional equation.

Moreover, Russia has calculations affecting regional dynamics. Although Moscow agrees with Iran on supporting the Syrian regime, they might part ways when the time for a settlement arrives. Russian Foreign Minister Sergey Lavrov’s participation in talks on the sidelines of the Friends of Syria conference in Paris on Jan. 12 signaled Russia’s readiness to discuss a transition in Syria. The meeting there between Lavrov and his team and Saad Hariri is even more evidence that Russia wants to neutralize Lebanon in the Syrian conflict on the basis of what President Suleiman has presented — the Baabda Declaration, which was endorsed by the International Support Group for Lebanon in New York on Sept. 26, 2013, with active Russian participation.

The parties calling for the Geneva II conference are trying to calm the atmosphere and are pressuring the Syrian regime and the opposition to participate and to soften their positions. They are also pushing for a cease-fire, even a partial one, before the summit in Montreux, Switzerland. In this atmosphere, it would cause difficulties for Iran — which has started reaping the benefits of its openness policy with the announcement of a partial lifting of the economic sanctions imposed against it — to continue escalating militarily and politically. This is especially the case since it might not only face opposition from other parties but also international condemnation, either directly or indirectly, at the start of the hearings at the Special Tribunal for Lebanon on Jan. 16. For these reasons, Zarif wants to calm things down and continue to proceed with openness.