The dialogue between Hezbollah and Future Movement leader Saad Hariri does not seem to be getting anywhere, as security and political issues such as the resistance’s weapons and the presidential vacuum remain unresolved. 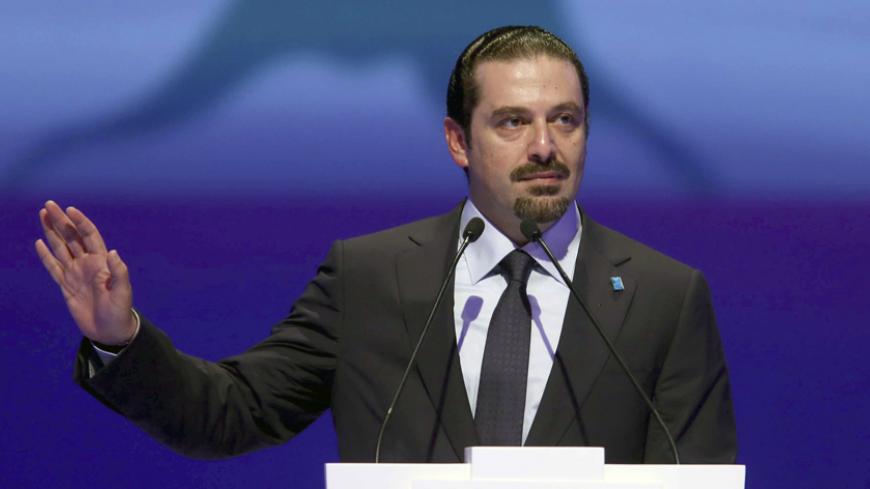 Former Prime Minister Saad Hariri's visit to Lebanon on Feb. 14 lasted no more than 10 days. Once again, his quick departure was no surprise. On Aug. 8, 2014, he made a short visit to Beirut that only lasted a couple of days, bearing a Saudi grant of $1 billion to the Lebanese army, three years after he was forced to leave the country when his government was overthrown and replaced by that of Prime Minister Najib Mikati.

The main reason behind the shortness of his visits to Beirut is the lack of security to ensure his safety. These conditions do not seem to be improving, despite the dialogue between his party, the Future Movement, and Hezbollah that has been ongoing since December and focuses on key political and security issues, such as facing the Salafist threat and electing a president. The heated speech he made in Beirut on Feb. 14, during a ceremony at the BIEL complex to mark the 10th anniversary of the assassination of his father, former Prime Minister Rafik Hariri, did not help reduce the risks to his personal security.

His return seems to have somehow revived political life in the country's institutional vacuum, triggering a series of meetings by officials. His return was also endorsed by his allies such as Walid Jumblatt and the Christian parties, which wanted him to stay in Lebanon. Yesterday’s opponents, namely the Free Patriotic Movement (FPM), welcomed the visit in the meeting between Hariri and FPM head Gen. Michel Aoun, two days after Hariri’s return. FPM members were also present among the audience at the BIEL complex, where the ceremony was held, for the first time. Nevertheless, the rapprochement did not dissipate the deep dispute with Hezbollah.

The conflict with Hezbollah revolves around security and political issues, including Hezbollah's weapons outside the framework of the state, its involvement in the Syrian war and the distribution of weapons in several Lebanese areas to the “Resistance Brigades.” There is also Hezbollah’s refusal to hand over the suspects in Hariri’s assassination and the March 14 accusation against Hezbollah of obstructing parliament sessions to elect a president and causing a constitutional vacuum. If prolonged, this vacuum could bring down the political system, whose foundations were re-established in accordance with the 1989 Taif Agreement, to which the Future Movement clings.

The dispute over Hezbollah's weapons has been aggravated following the Syrian crisis and Hezbollah’s involvement in the fighting in Syria. In his speech, he said, “We tell Hezbollah that binding the Golan [Heights] to south Lebanon is madness. Withdraw from Syria.” The speech was made on Feb. 14, i.e., following the Shebaa Farms attack by Hezbollah on Jan. 28 in response to the Jan. 18 Israeli attack in Quneitra. The latter claimed the lives of five Hezbollah members, including a high-ranking Iranian officer.

A leader and media spokesman for the Future Movement, Rashed Fayed, told Al-Monitor, “Hezbollah has become a regional actor.” His position indicates that Hezbollah has jumped out of the framework of Lebanese sovereignty and become involved in the broad confrontation that Iran is waging from Sanaa to Beirut. Fayed called for support for “the army, people and institutions.” This would entail a commitment to the state and its institutions, and to the state’s exclusive role in preserving security and decision-making on matters of war and peace. In contrast, the idea of “the army, people and the resistance,” which Hezbollah has long promoted, has turned into a slogan through which Hezbollah has tried to justify and legitimize the preservation of arms outside the framework of the state and national consensus.

As for the presidential vacuum, Hariri, remarkably, said that Hezbollah "is not in a hurry to elect a president.” The question remains: Despite the wide disagreement on these basic issues, why is Hariri committed to the dialogue with Hezbollah? In his speech, Hariri said that a dialogue with Hezbollah is “a national and Islamic necessity.” What Hariri meant by this is that the dialogue was designed to reduce the sectarian tension between Sunnis and Shiites. A leader of the Future Movement told Al-Monitor on condition of anonymity, “There is no alternative to this dialogue. The alternative is a confrontation in the street. The confrontation in the street means handing over the Sunni leadership to extremists, namely the Islamic State and Jabhat al-Nusra.”

It seems the name of the game for the time being is to engage Hezbollah in a way that clearly defines the issues of discord. Yet, this dialogue will not be useful or achieve results aside from preventing other enemies from infiltrating Lebanon in an attempt to seize the leadership of the Sunni street.

The dialogue did not facilitate the election of a president. It did not keep Lebanon neutral from the ongoing conflict in Syria. Hariri could not even stay in Lebanon. The dialogue is simply the only remaining option in the absence of alternatives.