The Islamic State is here to stay

Unlike al-Qaeda, the Islamic State has been able to institutionalize jihad, thus guaranteeing its survival. 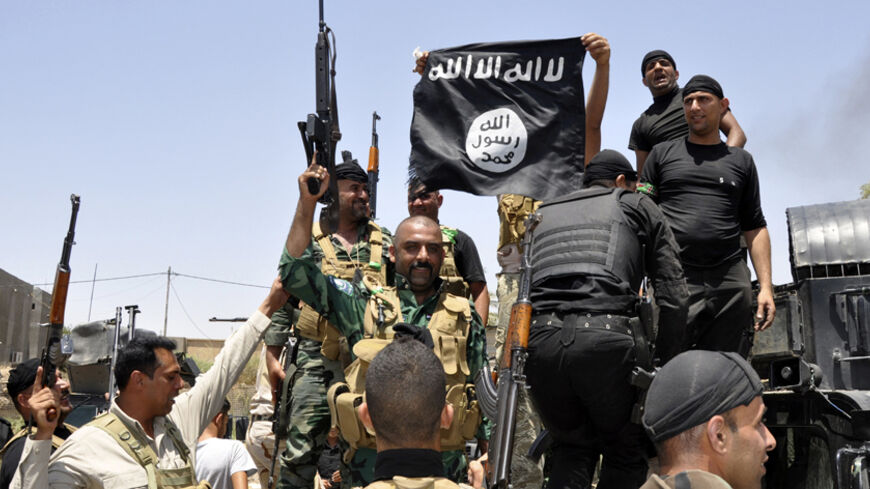 Iraqi security forces pull down a flag belonging to the Sunni militant group Islamic State during a patrol in the town of Dalli Abbas in Diyala province, June 30, 2014. - REUTERS

The Iraqi Interior Ministry announced that a number of high-ranking Islamic State (IS) leaders were targeted in a Nov. 8 airstrike. The US military confirmed the news that 50 IS top leaders were killed in airstrikes, without confirming whether IS' self-proclaimed caliph, Abu Bakr al-Baghdadi, was among them.

Newspapers and social networking sites widely spread the news, some even posting fabricated images of Baghdadi that allegedly confirmed his death. However, IS issued an audio recording of Baghdadi, proving that he was alive. The caliph said that the coalition strikes were ineffective and that the caliphate would continue to expand unabated.

In this context, the question arises: How will the targeting of IS leaders affect the organization’s activity and progress in achieving its objectives? Will the caliph's death, for instance, lead to the end of IS?

Some might compare the organization to al-Qaeda — the killing of Osama bin Laden significantly affected al-Qaeda, leading to its decline and dispersion within global jihad. Some say that, likewise, the killing of Baghdadi would weaken IS and pave the way for its swift elimination.

This perception, however, misses a significant development in IS' organizational structure. Unlike al-Qaeda, IS has been able to institutionalize jihad, as it owns an extensive, integrated network of relationships that formed and evolved over time. This was also triggered by the demise of al-Qaeda and the transfer of its energies to IS, knowing that the former was a cover for a range of terrorist activities that were carried out by groups not organizationally linked within an institutional framework.

The announcement of the caliphate was not unplanned. Baghdadi was, in fact, preparing the mechanisms necessary for the caliphate long before the actual announcement. If we look closely at the messages between IS founder Abu Musab al-Zarqawi and al-Qaeda’s Emir Osama Bin Laden, we can clearly see the main differences between both groups: IS allocated priority to the establishment of an Islamic state, including the means to achieve this goal. The messages between former Emir Abu Omar al-Baghdadi and current Emir Abu Bakr al-Baghdadi, also indicate the necessity to prepare for the establishment of the state.

Since the formation of the group in 2004, it has deployed many efforts toward this purpose. The group now has several social associations that manage the jihadist work in the military, political, economic and managerial fields. Today, a wide recruitment network is globally spread and works for IS, with the help of volunteers. This network encourages people from around the world to join the organization. IS has established ministries in the areas under its control, calling them “diwan,” in reference to the old Arabic Islamic name for government body. Reports from various sources that Al-Monitor gathered from IS-controlled areas show that IS was employing highly qualified civilian leaders in the medical, financial and administrative fields, many of whom come from Western countries. The organization uses these human resources off the battlefield to offer support in their areas of specialization.

The political and social unrest and problems resulting from the Arab Spring have served as constant humanitarian fuel for the organization. Military experts and people with leadership experience have accounted for a large proportion of the human resources of the organization due to the Iraqi government's inability to attract Baathist leaders to its side, knowing that many of them have been lured by IS. Thus, a significant number of Syrian military commanders and other Arab armies that vanished in the Arab Spring events, moved to IS. These figures have obtained a higher level of skills within the three years of IS’ ascent.

Contrary to reports that IS is made up of dispersed groups that exhibit purposeless and random behavior, the organization has a strategic vision that it develops within its high Shura councils in the military, security and political fields. Though killing IS' leaders would cause great losses, it will not lead to IS' elimination, as leaders can be substituted, depending on the high councils' decisions.

Moreover, there are still favorable factors for the survival and progress of the organization, and these cannot be eliminated without being solved first. Some of these factors include the militarily and politically fragile regions in Iraq, Syria, Lebanon, Libya, Egypt, and Yemen. Also, there are regional actors competing to play a role in these areas to extend their influence. Their ideological ambitions and conflicts of interest prevent them from reaching a compromise. For example, Turkey and Saudi Arabia are not willing to reconcile with the Syrian regime, and Iran and Hezbollah are not ready to accept any solution that might lead to President Bashar al-Assad’s toppling.

The organization has turned into a complex phenomenon that cannot be understood linearly and cannot be fragmented into separate dimensions. Falling into the trap of simplifying the organization's structure, by believing that it is just a group of fools, will only lead its opposing camp to large defeats.

Similarly, solutions are linked to a complex web of options divided between players with incompatible agendas. The picture looks like a game of chess, where any movement can open an unexpected set of future options.

Although the caliphate state still lacks key ingredients for the establishment of a stable state that is regionally and internationally recognized, it will remain active for a long time in the region. IS will expand in certain areas and be defeated in others. In the meantime, the region is ripe for the emergence of similar organizations.