Despite the Baghdad government's string of failures in fighting the Islamic State (IS), Iraqi politicians, clergy, media and analysts have been busy trying to assert that Iraq does not need foreign troops on the ground to fight IS. 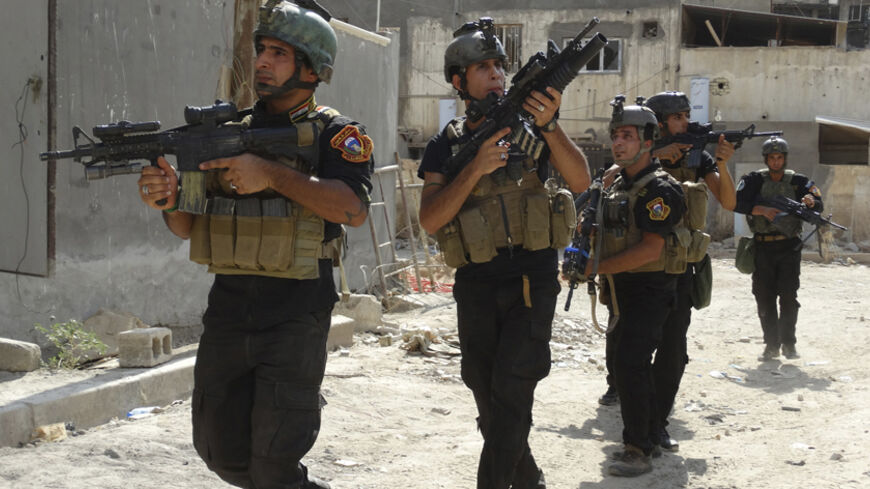 The rejection of US, regional or international intervention in Iraq is a subject that has almost become more interesting in Iraq than the fight against the Islamic State (IS). The politicians, the clergy, the media and analysts have been busy during the past few weeks trying to assert that Iraq does not need troops on the ground to fight IS and that Iraqi troops backed by Shiite and Sunni volunteers are capable of defeating the organization.

These assertions would have been normal had it not been for their repeated and almost daily recurrence, which raised questions about the motives behind them. Will Iraq be exposed to pressure to accept the presence of foreign troops on its land? Where do these pressures come from? Are these repeated assurances related to facts on the ground, in terms of operations, regional balances or domestic calculations?

The battle to liberate Jurf Al-Sakhar, south of Baghdad, came in turn as new evidence that Iraq does not need such an intervention, and that the only required intervention is providing weapons to the Iraqi forces and securing air coverage for their movements.

The ground intervention — needed or not — is definitely a decision that the Iraqi authorities can make alone, and this decision is supposed to be based on accurate military estimates on the ground and a thorough examination of the facts and basic needs in the battlefields.

Still, the intervention rejection does not imply a rejection of help on the ground, especially given that the United States had sent Baghdad dozens of advisers at the end of June as a quick response to security developments that led to the fall of Mosul into the hands of IS on June 9.

At the time, the arrival of US military experts raised no sensitivity in Iraq, as there were even entreaties to have more experts sent.

This means that a sort of confusion must have occurred in the understanding of ground intervention and its limits. The intervention of US Apache war helicopters in ground battles necessarily implies the need for staging bases relatively close to fighting positions. It also means those helicopters need accurate information provided by advisers on the ground.

In this matter, a surprising variable occurred when the local government of Anbar demanded US ground intervention in the province, which was rejected by the Iraqi government and by Anbar’s political forces as well.

Meanwhile, Anbar continued to demand government support for the fighters and troops on the ground.

Regardless, it is necessary to understand the international military intervention as military support, rather than a return of the control of foreign troops on the ground. Iraqis and the international community alike ought to understand this point. It is only through this common understanding that it will be possible to invest the time and energy and achieve the desired flexibility and cooperation to eliminate IS.

There is a general framework for how the new Iraqi government understands the situation; a third of Iraq is controlled by a terrorist organization and the county is going through large and fateful political and economic crises. The government takes this into account as it tries to get out of this excruciating crisis with the least damage possible at the national level.

Eliminating IS will not be an easy task, and Iraq is going through regional and international difficulties and conflicts that have long been used by terrorist organizations to reach troubled areas. The inability of the international community to solve those conflicts has caused, and still was causing, more challenges to international peace and security. Add to this the major sectarian polarization in the Middle East, which provided a suitable environment for IS deployment and expansion.

The international community ought to get over the idea of ​​eliminating terrorism through military action alone. Regional crises that are persistent and correlated with the Iraqi crisis should all be dealt with accordingly. For its part, the Iraqi government should soften the atmosphere of suspicion that has spread around the intentions of foreign military intervention. Initiatives to find a clear mechanism concerning the nature of the cooperation with the international coalition to eliminate terrorism should be taken. Contradictory language should be avoided when addressing Iraqi relations with the United States in particular; rhetoric instead should be transparent and free from any misinterpretation.