The Islamic State is tightening control over the regions it captured in Iraq in an attempt to consolidate its power. 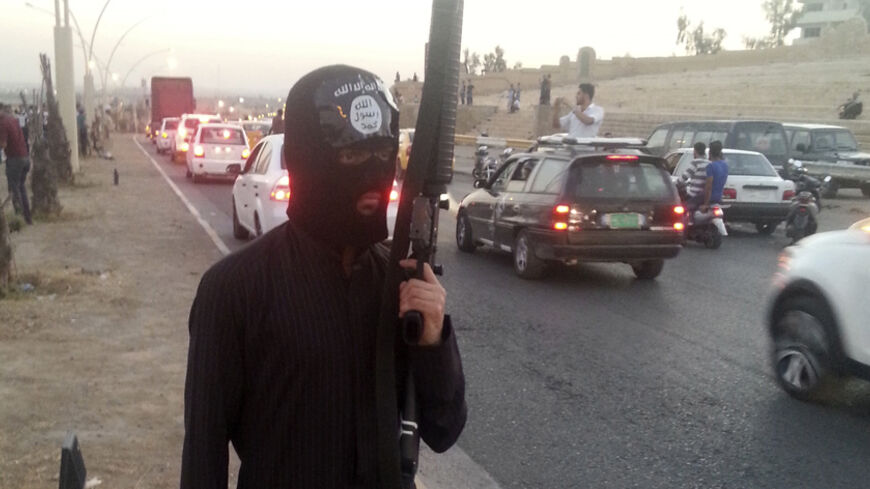 A fighter of the Islamic State (IS) stands guard with his weapon on the side of a street in the city of Mosul, June 23, 2014. - REUTERS

To prove its ascendance of a political fait accompli, the Islamic State (IS) is attempting to demonstrate its ability to control the areas it has thus far occupied. To this end, the group is organizing on the ground to give the impression that no one should count on its being defeated or on eliminating it, with or without airstrikes.

It is not by chance that IS orders that its slogan, “The Islamic State will remain,” be recited by its victims before they are killed, as recognition that it is an undeniable and unbeatable reality. The group is well aware that occupying land is not the same as having control over it, so it needs to assert its authority and power over the territory it has seized to make them IS strongholds.

At the same time, the group is beefing up security measures in these areas in response to recent moves by the Iraqi government and the army. The government in Baghdad has been encouraging Sunni tribes in IS-dominated areas to rise up and fight the group, as happened in 2007, when US Gen. David Petraeus persuaded the Sunnis in Anbar province to confront al-Qaeda. At the same time, the army has had some success in western Iraq, such as retaking Jurf al-Sakhar from IS fighters in late October.

On Oct. 19, IS had flexed its muscles in Mosul, carrying out a major maneuver involving thousands of militants and hundreds of military vehicles. According to banners raised during the operation, the maneuver was in response to airstrikes launched by the US-led international coalition.

In an interview with Al-Monitor, Hisham al-Hashimi, an expert on IS, said that the group has succeeded in lessening the effectiveness of the coalition’s airstrikes through a number of military and security tactics, including the leadership avoiding use of mobile phones, the Internet and GPS devices and fighters abandoning military camps, security centers, schools, mosques and government buildings. It also reorganized its fighters into small cells dispersed among civilian populations and hid its Humvees, artillery pieces, tanks and other military vehicles in residential neighborhoods and on farms and dirt roads. In addition, IS withdrew its military leadership from public, provided media with false information to sidetrack monitors and began announcing news of events days after they had taken place.

Hashimi criticized the international coalition for not having targeted IS' maneuver in Mosul. According to him, the coalition's failure to take action revealed the weakness of its military plan to eliminate IS, as it makes clear that there is no plan in place to monitor the group’s activities or target major military movements. There was also the problem of the coalition airdrop of aid and food supplies in late October during which one bundle ended up in IS hands.

IS is of course monitoring all suspicious activities and acts that might help its opponents in any way. According to information security sources provided Al-Monitor, it appears that the group has delegated its security officials in all sectors to carefully keep tabs on the field leadership and to arrest and kill anyone who emerges as suspect.

On Oct. 24, the group carried out extensive executions in southern Mosul, killing police and army officers. This took place after an announcement by Ninevah Gov. Atheel al-Nujaifi, in which he said army officers in Mosul were waiting for the Iraqi army to reach the city so they could proceed in the effort to eliminate IS.

Al-Monitor contacted one of the victims’ relatives to ask about the situation there. The family member said that officers from Mosul had fled to Kirkuk or Kurdistan after IS occupied the city. Only those who had no money or were unable to leave due to the group’s control of the city’s roads stayed. IS did not initially attack any of the officers, demanding only that they repent and disavow any affiliation with the Baghdad government.

After Nujaifi’s statement, however, the group arrested a number of officers. Some were executed, while others were moved to undisclosed locations. One of the officers detained was Col. Issa Osman al-Louhibi, commander of the fourth division of the local police. He was publicly executed in Mosul and his body hanged in one of the city’s squares as a warning to others.

On Oct. 28, IS executed some 50 members from Sunni tribes who had fought against the group in Anbar. There were several reports of similar acts being carried out in other IS-controlled areas. People are being executed for apostasy, renunciation of Islam, which according to IS includes expressing any kind of opposition to it, since it considers itself the official representative of Islam.