The popular mobilization, which is formed of Shiite volunteers to fight the Islamic State, has been both sanctified and demonized in Iraqi media, in light of its success in warding off IS from certain cities, while at the same time committing violations on the battlefield. 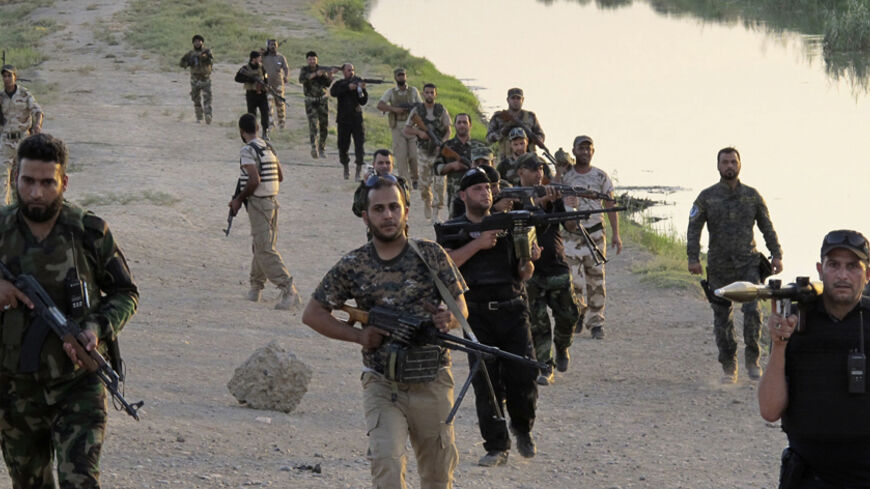 Two opposite phenomena are increasingly spreading in an unprecedented manner in Iraq. These two trends are related to the groups of popular mobilization, which includes armed Shiite factions and volunteers who joined in response to the “righteous jihad” fatwa issued by cleric Ali al-Sistani in June to prevent the Islamic State (IS) from advancing farther in Iraq. At the time, IS took advantage of the Iraqi forces’ collapse by trying to storm into Baghdad.

The first phenomenon lies in sanctifying the popular mobilization forces, banning any criticism of their behavior, or raising questions about their mechanism of action or their decisions on the ground. This is particularly true because many factions do not operate under the banner of the popular mobilization alone; they raise their own flags and follow their own military order.

While this sanctifying phenomenon is on the rise in the media and among politicians in Iraq, particularly among Shiites, another trend is growing in the other direction. Many media outlets and Sunni politicians are trying to “demonize” the popular mobilization, portraying its members as thieves, murderers and sectarian actors, rather than being noble volunteers who responded to the call to defend their country.

Undoubtedly, the two sides are hurling accusations at one another, blowing facts and events out of proportion in an attempt to prove their point of view.

Sunni religious, tribal and political leaders who recently participated in the Sunni forces conference in Erbil on Dec. 18 also had accusations to make. These said that [the popular mobilization forces] have carried out attacks and looting operations, burned bodies of IS fighters and punished IS affiliates in the absence of a legal trial, as well as punished local people without proof of affiliation to IS. Add to this other matters deemed illegal and contrary to human rights.

This happens for various reasons, including the belief that these regions have constituted a favorable environment for IS and deserve to be punished or to avenge the brutal actions of IS. These attacks — perpetrated against Sunni inhabitants in some of the areas liberated from IS, especially in Diyala province, east of Baghdad — are believed to have come from fighters in the popular mobilization forces.

Meanwhile, Shiite parties reject these accusations and view them as an attempt to save IS.

On the other hand, the volunteers are not “demons” either. They have been fighting under dire conditions for more than four months, liberating lands from IS’ grip, making qualitative shifts in the battles against the organization. This is especially true in the towns of Amirli and Jurf al-Sakhar, among others.

The popular mobilization forces have made a fundamental difference on the battlefield, as they have undermined the superiority of IS at the level of guerrilla warfare. They have been able to make swift movements, making decisions on the ground without military intricacies and the need to refer to higher orders.

The popular mobilization forces have been following military tactics similar to those that IS has also been capitalizing on. This has been a major game-changer. However, there was another factor that changed the equation.

Psychological warfare, which IS was employing during the first days of its invasion of Mosul, is known to everyone. The organization capitalized on rumors and the media, presenting itself as an invincible force that would not hesitate to commit the most heinous of crimes. This has deeply affected the Iraqi army’s morale.

The popular mobilization forces have also tried to capitalize on this element, even if symbolically. They have done so by intensifying media campaigns, parading their victories and by shunning public criticism of the group’s members.

What needs to be stressed in this context is that the popular mobilization achievements are not an excuse for the excesses of some of its members, whatever these excesses are.

Today, the popular mobilization operates under the banner of the state, alongside the army and the police. It is not an armed group working outside the bounds of the law. Therefore, the group’s forces ought to completely abide by the same rules and regulations followed by the army forces.

In the same vein, one ought to mention that Sistani warned against the violations that could be committed by the volunteers during battle. This warning stems from his vision of the need for these forces to be exemplary in their commitment to the law, preventing the behavior of some members from affecting the entire group. This is why Sistani urged media outlets and politicians not to generalize about the behavior of some members to the entire popular mobilization force.

Today, it has become necessary to view the experience of this force as a unique experience that has truly helped Iraq from falling in the hands of IS. The popular mobilization forces have protected many Iraqi cities and liberated many others. Yet, this is not an excuse to condone the excesses of certain members, which contribute to deepening the sectarian rift or undermining trust in the state apparatus, which the popular mobilization will not replace at any stage.

Reinforcing and restructuring the state’s security and military forces and eliminating all corruption is what Iraqis are waiting for. Yet, they ought to understand that the current phase is of great sensitivity and danger for Iraq and the existence of the popular mobilization is necessary, until it is no longer needed. This is when IS is defeated and the security and military forces take full control of the situation.