To promote wins against IS, Iran's Soleimani emerges

Quds Force Cmdr. Qasem Soleimani has been advising Iraqi Shiite militias with some success in the fight against the Islamic State. 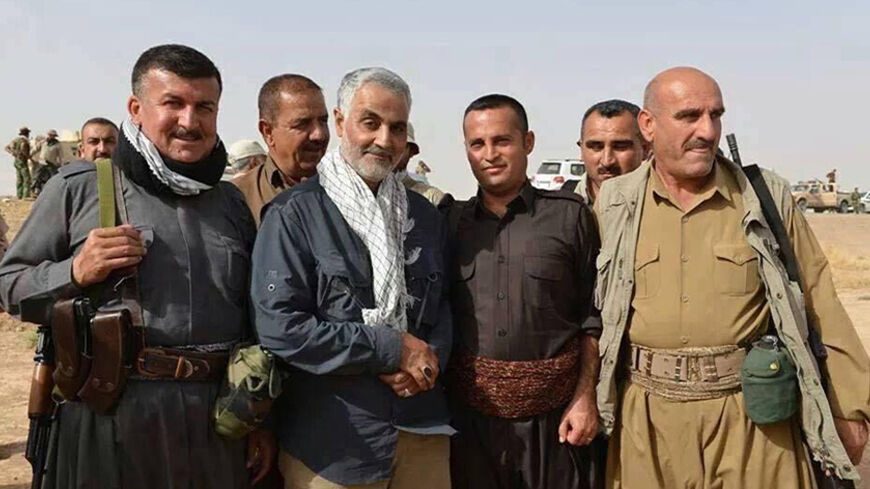 Qasem Soleimani, the head of Iran’s Quds Force, poses with Kurdish fighters in Iraq in this undated photo. - Twitter/@Mojtaba_Fathi

In the last few months, the Iranian military leader Qasem Soleimani went from being a mysterious man who made no public appearances to a commander whose photos and videos were broadcast after each Iraqi army victory against Islamic State (IS) forces. Soleimani was no longer the “shadow commander,” as Dexter Filkins called him in a 2013 New Yorker article.

Soleimani, commander of Iran's Quds Force, began his emergence into the public eye in Iraqi military and political settings after Mosul fell to IS in June. Al-Monitor has learned from Iraqi political sources that Soleimani has been undeniably engaged in political and military decisions related to Iraq's fight against IS.

Soleimani purposely wanted his photos to be published to publicize his presence on the military front. The first photo appeared after Iraqi forces broke the siege against the city of Amerli. The image reportedly was taken there. Other photos are said to be from Jarf al-Sakhr, al-Dalouiah and other Iraqi regions liberated from IS.

In such photos, Soleimani typically wears simple military attire, without weapons or equipment, and sits or stands among fighters affiliated with Shiite militias or sometimes with militia leaders, like Hadi al-Amiri, the head of the Badr Organization.

Soleimani usually has a smile on his face. He does not appear surrounded by Iranian security. None of the photos show him with Iraqi army forces or commanders. This might be explained by a lack of confidence in the Iraqi army, which is composed of a variety of elements from different backgrounds and had failed in several battles against IS, chief among them the fall of Mosul.

Given the army's track record, one can understand Iran’s preference for supporting Shiite militias instead of focusing its efforts on rebuilding the Iraqi army. The fact is that Iran followed the same pattern at the beginning of the Islamic Revolution, when it empowered military forces parallel to the national army, namely the Islamic Revolutionary Guard Corps and the Organization for Mobilization of the Oppressed (Basij). Iran used these forces to restore domestic order and repel the previous Iraqi regime’s attacks against it.

Soleimani's emergence proffers multiple meanings and sends a variety of messages back to his Iranian homeland as well as to the region and the international community. The photos and news of victories under Soleimani's advisement have been published generously on Iranian news websites to prove the validity and success of the general policy adopted by the Islamic Republic. They suggest that the Iranian people should trust in the regime and be patient, including on the nuclear issue and relations with the international community, so the goals of the revolution can be achieved.

Iranian politicians began frankly and openly talking about their country's regional role by using Soleimani as a role model for credibility and success. In an interview with Al-Mayadeen, Adm. Ali Shamkhani, secretary-general of the Supreme National Security Council, said, “How can Kobani be bombed, and how can the war continue to rage there, knowing that Amerli was liberated in two days, Hamrin in one day and Jarf al-Sakhr in two days? What is the hidden agenda of this propaganda? What is the real goal behind this propaganda of rallying 42 countries and then 60? Does it aim at fighting IS or seeking to develop a new political architecture in the region?

Iran is apparently using Soleimani to relay to its allies that it is the only party they can rely on. It is also saying that at the end of the day, whatever the political differences among its allies or with Iran, Tehran remains their one and only protector. For example, Iran continues to support the Palestinians despite the considerable tension between them over events in Syria. In an open letter from Soleimani to the Palestinian people during the Israeli war on the Gaza Strip in July, Soleimani stressed Iran’s firm position in terms of “proceeding with determination to support the resistance and help it win so that life for Zionists turns into a hell.” Soleimani paid tribute to the fighters in all the Palestinian resistance battalions “who are teaching the enemy, and those who stand behind the enemy or conspire with it from afar or near, the deepest lessons of confrontation.”

The Iranian message to the region is a declaration of confidence in victory against rival powers. Those knowledgeable of Iranian rhetoric would likely interpret those allegedly collaborating with the enemy to be the anti-Iranian Arab regimes in the region.

Iranian-US relations are the most important aspect of the message Iran is conveying through Soleimani as icon. Iran wants to be recognized by the West as a regional power whose position must be taken into account in all matters involving the area. It played such a role under the shah, but the West and its allies rejected the notion after the Islamic Revolution.

It seems Iran is now reaping the fruits of its efforts over the last three decades to realize its regional objectives. The United States has begun to show flexibility toward Iran and the regional role it plays. This is due to the unwillingness of the Barack Obama administration to return to the region, the current vacuum permitting the expansion of extremists organizations in the area and the inability of other regional powers — specifically, Saudi Arabia and Turkey — to fill the void. Riyadh and Ankara are both accused of contributing to the emergence of extremist groups in the region, so the scope of their influence there is limited.