IS makes plans to fend off attacks on Mosul

The Islamic State focuses on preparations to fight off expected attacks to Mosul by identifying secondary locations for headquarters, storing weapons in mosques and planting booby-traps. 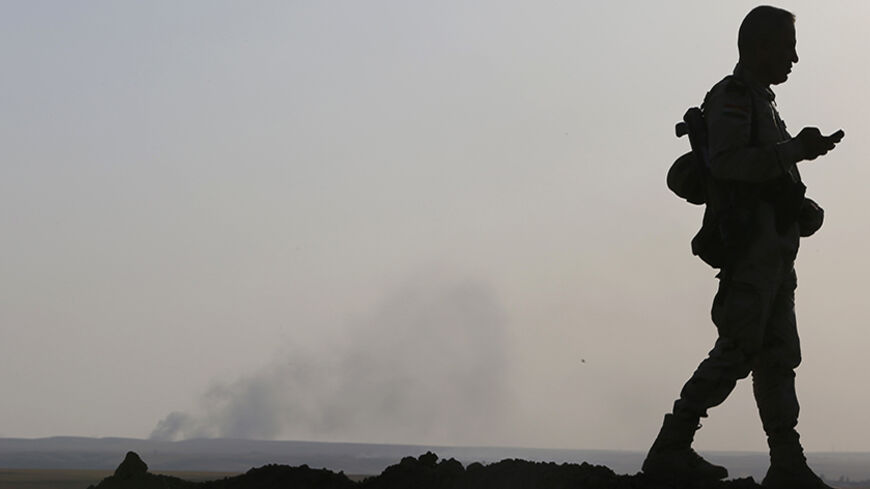 Smoke rises from a recent US airstrike on Islamic State militant positions in Khazir, on the edge of Mosul, Sept. 16, 2014. - REUTERS/Ahmed Jadallah

The fronts that the Islamic State (IS) seems insistent on opening in the south and west of Baghdad appear to be linked to the current US-led airstrikes that are being launched against the organization in Iraq and Syria.

According to local inhabitants in Mosul and Anbar, the main weakness IS can turn to its advantage is the Sunni gunmen originating from tribes and former armed groups. Their final position on whether they will join the international alliance or fight alongside IS is not yet known.

This issue is sensitive for IS, whose basic strategy relies on persuading local Sunni inhabitants that they may become subject to a revenge attack by Iran through the Shiite militias, on the one hand, and to an attack by the “infidel crusaders,” represented by Western countries and America, on the other. But a tendency among the active Sunni clans and armed groups represents a key danger for IS.

News websites have reported on dozens of armed Sunni groups going by various names, but historically there are only five main groups on the ground: the Islamic Army, the Naqshbandi Army, the Mujahedeen Army, Thawrat al-Ishrin Brigades and tribal factions.

The existence and role of these groups on the ground cannot be confirmed, except for some incidents which the websites refer to, such as sporadic clashes that occur between IS and the Naqshbandi Army, especially in Kirkuk, or when the Mujahedeen Army gunmen were expelled by IS from Fallujah towns.

Abu Maysara, formerly of the Mujahedeen Army, told Al-Monitor, “The presence of Sunni armed groups is not clear because they have been working in complex ways since 2003. And it is often not possible to confirm their numbers, nor the continuous movement of fighters among [the groups].”

He said, “The value of the real, traditional armed groups is not in their number of fighters, but in their history and in their leadership and organizational structures, which can enable them to gather thousands of fighters in days, just as they can recover their former fighters who now work within IS.”

A few days ago, there was news that IS was trying to re-attract those groups in anticipation of the expected international war, so much so that IS gave up on its efforts to force those factions to submit to it by force, and began sending them delegations to neutralize their position during the expected war, according to witnesses.

Sheikh Ali al-Badran, an Anbar elder, told Al-Monitor that all the official efforts, either through the Iraqi government or through American envoys, were focused on trying to attract Sunni gunmen to the war front against IS but that this hasn’t happened yet because their demands are still too high.

IS' preparations are not limited to trying to attract its opponents. Ahmad Shafik [editor's note: Aliases have been used in this article to protect sources], a lawyer who still lives in Mosul, said that he has been watching IS' movements in the city for weeks and that the group is taking further steps to fight off the expected attacks.

The lawyer summarizes these preparations as follows:

In the past two weeks, the organization has been strongly trying to bring the fight to new areas. IS is imposing its control over Jarf al-Sakhr and Yusufiya, south of Baghdad.

The areas south of Baghdad are very important for the war against IS. Those areas are religiously mixed, which risks causing massacres if IS succeeds in spreading to neighboring villages with Shiite majorities, such as Musayyib, north of Jarf al-Sakhr, and Mahmudiyah, east of Yusufiya.

Since Sept. 21, IS has started a new chapter in its wars west of Baghdad. IS has taken control of Saqlawiya, is holding dozens of soldiers, and is attacking strategic points that are sensitive for the movement of government forces besieging Fallujah since the beginning of the year, such as al-Sajar, which is considered a main link between Fallujah and Salahuddin province (northwest).

According to security expert Mortada al-Nasiri, IS is trying to move the battle away from its main headquarters in Mosul, where the towns of Saqlawiya and Jarf al-Sakhr are located, to a distance of 450-500 kilometers (280-310 miles) from Mosul.

In an phone call with Al-Monitor, Nasiri said that the expansion of the battlefronts would confuse the American military leaders. Since the strategic IS targets US leaders are preparing to hit are constantly moving, this makes it difficult for the organization to be mortally hit.

But according to Nasiri, Mosul is the group’s soft underbelly today. The group hasn’t deployed large numbers of troops inside the city because it needs fighters at the open fronts, and losing Mosul would constitute a blow for IS morale.

The shape of the war on IS is yet to be determined, as are the content and effectiveness of war plans that have no ground effort. Also, solutions are needed for various problems and complications, such as the participation of the Iraqi army and militias in the battles and the local sensitivities they raise. All these factors are weaknesses that IS is trying to exploit to strengthen its front against the large international war against it.