Erdogan slams US on Syria again, days after Biden visit 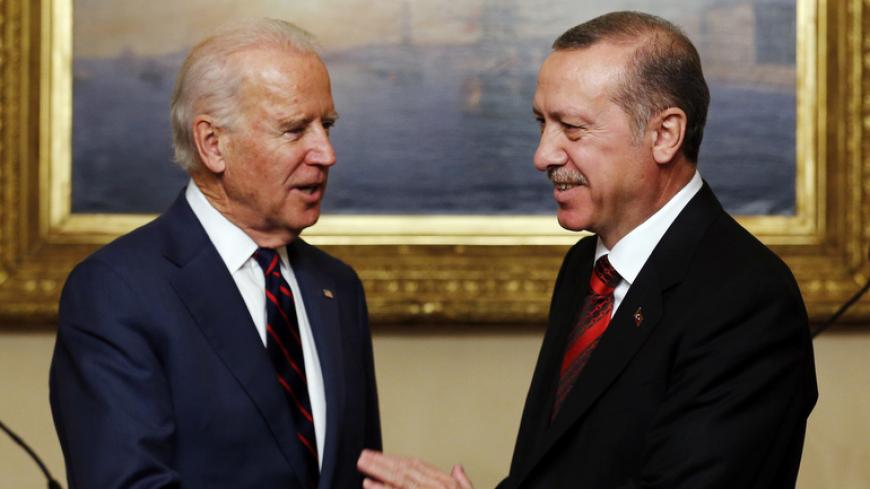 Is Turkey really a member of the anti-Islamic State coalition?

Turkish President Recep Tayyip Erdogan said on Nov. 26 that he is “against impertinence, recklessness and endless demands” coming from “12,000 kilometers away” (7,456 miles), his latest not-so-veiled rebuke of US policy toward Syria.

Erdogan’s outburst came four days after US Vice President Joe Biden departed Turkey. Biden, the latest in a seemingly endless stream of senior US official visitors to Ankara, spoke of the “depth” of the US-Turkish relationship and how the United States “needs” Turkey. The US vice president praised Turkey’s turnaround, for now, in its ties with Iraq, as reported this week by Semih Idiz, and Turkey’s handling of close to 1.6 million Syrian refugees (the UN High Commissioner for Refugees puts the number at approximately 1.1 million).

Despite the predictable deadening public platitudes, Biden’s visit, like those of other senior US officials, was a flop for the anti-Islamic State (IS) coalition. Erdogan prefers to hold his support against IS as ransom for a US-backed buffer or no-fly zone inside Syria. Not that the Turkish president, or others hawking such a plan, present any “day after” strategies for Syria; explain how a buffer zone or “doubling down” on the Syrian opposition would do anything more than prolong the war and wreck what remains of the Syrian state; lay out how the United States can avoid another Libya or another Iraq (that is, a failed state or a prolonged occupation) if it pursues regime change in Syria; identify where a post-transition stabilization force may come from given the limitations of Syrian rebel forces; or explain why the jihadists would not gain the upper hand in a divided post-Assad Syria with such a weak and fragmented opposition.

Turkey’s unwillingness to combat IS and other terrorist groups stands in contrast with US allies Saudi Arabia, United Arab Emirates, Jordan and Bahrain, as well as Iran, all of whom have concerns about US policy but are nonetheless engaged in combat operations against terrorists in Syria and Iraq.

Bruce Riedel explains how Saudi Arabia, which uncovered an IS-linked cell operating in the kingdom this week, is struggling with managing the threat from IS and its regional rivalry with Iran, but is nonetheless playing a leading role in the anti-IS coalition. Hossein Mousavian points out that among the “ground forces” combating IS, besides US-supported Syrian rebel forces, are the Iraqi and Syrian armies and Hezbollah, which are all backed by Iran. According to Mousavian, Tehran could be ready to do more if a nuclear deal is reached. Ali Hashem reports this week on Hezbollah’s role in Iraq, and Ali Mamouri chronicles the higher profile role that Iran Quds Force leader Qasem Soleimani is playing with Iraqi forces battling IS. Iraqi Kurdistan Region President Massoud Barzani, whose forces are also on the frontlines of the battle against IS, praised Iran’s role, saying in August that "Iran was the first country to provide us with weapons and ammunition" to confront the IS advance toward Erbil. Syrian government warplanes bombed Raqqa, an IS stronghold, on Nov. 25, although the United States accused Syria of killing many civilians in the process. US-led coalition forces also conducted airstrikes against IS forces in Raqqa this week.

Erdogan appears to be the odd man out in the coalition, compared with the actions of the other regional powers, and his policies and statements should raise broader questions about the direction of Turkish foreign policy, including what it means for Turkey’s membership bid in the EU and its role in NATO. Idiz writes that Erdogan appears to be turning his back on Turkey’s EU membership bid. On Nov. 28, the eve of Pope Francis’ visit to Turkey, Erdogan offered the following about Western countries: “Believe me, they don’t like us,” AFP reported him as saying. “They look like friends, but they want us dead — they like seeing our children die. How long will we stand that fact?”

The United States might soon tire of the all-pain, no-gain appeals to Turkey and simply ask Erdogan to pick a side in the US war against terrorists, making clear, as US President Barack Obama recently said, that the United States is not planning to remove Syrian President Bashar al-Assad at this time. Turkey is a critical US ally that must play a constructive role in Syria and the region, but the trends are becoming alarming. The United States, for its part, does not “need” Turkish bases to train anti-IS or anti-Assad rebels, does not “need” Turkish troops in Syria, and certainly does not “need” a buffer or no-fly zone, unless Washington is longing for a quagmire. What the coalition “needs” is for Turkey to crack down, hard, on the terrorist transit, trade and financial networks operating through Turkey into Syria, which have contributed to the rise of these groups over the past three years. Turkey’s intensified efforts at border security and counterterrorism cooperation would be a major contribution to the coalition. It does not seem to be an unreasonable ask, even if Ankara disagrees with the US approach to Assad.

As this column wrote on Nov. 16, it is the prospect of a nuclear deal with Iran, and the potential for regional cooperation with Iran, that is the key to a settlement of many of the region’s problems, including a political settlement in Syria and whether Assad stays or goes: “US interests in both defeating IS and securing a political settlement to end the Syria war depend on Iran’s good offices in Damascus. The United States cannot deal with Assad, but Iran can. Iran, like Washington’s regional allies, has a high tolerance for the spilling of Syrian blood. If the United States wants to deal Iran out in Syria, especially in the context of a bid to oust Assad, then Iran’s card will be to make the awful situation in Syria go from bad to worse. Iran is not necessarily immovable on Assad’s survival. Iran’s four-point plan for Syria includes a decentralization of power away from the Syrian presidency. Iranian officials privately signal that Assad may not be untouchable, under the right conditions, but such conversations — if they are to bear fruit — can only occur with Iran in a spirit of collaboration, not confrontation. Otherwise, Iran will simply hunker down, and the war will go on.”

The seven-month extension of the P5+1 nuclear talks with Iran has sparked reactions across the region. Laura Rozen reports from Vienna that progress was made as the Nov. 24 deadline approached but observers are still divided on whether this can be turned into a finished deal in the upcoming months.

Ben Caspit writes of the furious diplomatic effort by Israel to fend off what it would consider a bad deal: “Israel has invested enormous amounts of energy in this. Over the past few months, and especially in the last few weeks, Minister of Intelligence Yuval Steinitz, who has coordinated these efforts, has become a 'frequent flyer,' plowing through the relevant capitals right and left. And Steinitz wasn’t alone in this. Senior Israeli intelligence officials also made frequent trips abroad to present their colleagues in different relevant capitals with intelligence documents, intelligence per se, and plenty of new information obtained by the Mossad and other Israeli intelligence agencies about the dangers inherent in that 'bad agreement.'

“As the deadline approached this week, Steinitz intensified his activities, making two more quick visits, to London and to Paris, and meeting with German Foreign Minister Frank-Walter Steinmeier. Steinitz’s message, backed as always with intelligence reports, expert assessments and various analyses: 'The agreement under discussion is a terrible agreement. It leaves room for huge potential breaches, which means that it is propped up on weak foundations. If those gaps are not sealed, it would be preferable to avoid reaching any agreement whatsoever than to sign the current one.'”

Retired Israel Defense Forces Gen. Michael Herzog writes that Israel views the extension of the talks as the least of all possible evils, “The truth is that Israel’s ability to influence the relationship between Iran and the West has reduced considerably. The credibility of its military option (which still exists) has decreased in the eyes of the United States and Iran, and its tense relationship with US President Barack Obama's administration makes it difficult to engage in open dialogue between the two country’s top leaders. At this stage, as long as Iran is not hurtling toward the critical nuclear threshold, all that is left for Israel to do is to maintain the hope that Iran will continue to be intransigent, and that the US Congress will continue to play tough.”

Update: The Wall Street Journal reported on Dec. 1 that the US and Turkey may be close to a deal on US use of Incirlik air base and a limited no-fly zone in northern Syria.