Confusion persists over Turkey's position on IS

It is still unclear whether Turkey is now on board the anti-Islamic State coalition. 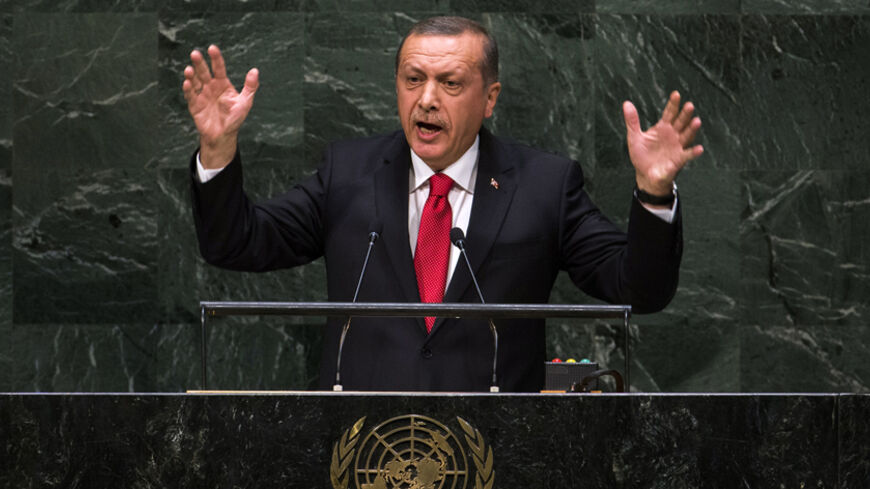 He offered “both military and political” contributions from Turkey to the joint action led by the United States and participated in by a number of Sunni Arab countries.

His statements were confusing, if not to his own government, then to many others in Turkey. Just days ago, Turkey seemed adamant on going no further than providing “humanitarian assistance” to the anti-IS coalition. True, the main obstacle that had hampered Turkey’s active role in any anti-IS engagement was removed when the hostages came back home safely on Sept. 20. Yet, although Turkey’s hands were now free, Erdogan had not given any indication that Turkey would be as accommodating as the Americans wish.

Turkey sounded so decisive about taking part in military action against IS that The Independent published an editorial under the very long and expressive headline, “Turkey we need you: There can be no further prevaricating over [IS],” with the introductory remark, “Recep Tayyip Erdogan, the Turkish president, is reportedly considering offering his country’s backing, 'both military and political,' to the US-led campaign against IS. If that support is given, the chances will improve greatly of defeating the jihadist group — a defeat that American air strikes alone are unlikely to secure.”

It concludes, “If President Erdogan unleashes what is NATO’s second-largest army against the jihadists, it could tip the military balance decisively — but at the obvious risk of bloody acts of terrorist reprisal in Turkish cities.

“Nonetheless, Turkey’s clear interest is to see IS eliminated. No country can be comfortable living next door to a group whose savagery knows no bounds, committed to the overthrow of secular regimes like the one in Ankara, and whose ideology is loathed by the vast majority of the Turkish people.

“With the release last week of the 49 Turkish prisoners held by [IS] since it overran the Iraqi city of Mosul in June — probably under a prisoner exchange between the two sides — Mr. Erdogan’s hands are now freer. It is time for him to throw his country’s weight into the fight against [IS], a threat to the entire region, and not least to Turkey itself.”

The president’s about-face is interpreted by a perceptive British journalist, the Financial Times' correspondent in Istanbul Daniel Dombey, as the result of strong US pressure on him and further proof of his flexibility and pragmatism. In his piece “Turkey vows greater role in anti-[IS] campaign,” he argued that following the visits of Secretary of Defense Chuck Hagel and Secretary of State John Kerry and his encounter with President Barack Obama, Erdogan chose to follow the US lead, which to some meant bowing to Washington’s pressure. To others, this was a typical outcome of Erdogan’s well-known pragmatism.

Whatever his reasons, Erdogan’s position confirmed what Kerry had said at a UN Global Counterterror meeting Sept. 23. "Turkey is very much part of this coalition, and Turkey will be very engaged on the frontlines of this effort," Kerry said. "But clearly, Turkey had an initial challenge with respect to its hostages, and that being resolved now, Turkey is ready to conduct additional efforts along with the rest of us in order to guarantee success. And we’re very grateful to Turkey for that willingness."

As Erdogan’s remarks reverberated in Turkey, his right-hand man, Deputy Prime Minister Yalcin Akdogan, interpreted Turkey's proffered “military assistance,” saying, “President Erdogan’s statements regarding our support to combating IS and his viewpoints reflect the thinking of the Turkish state. The emphasis is on our conviction for joint struggle. There can be no saying, ‘He didn’t feel that way before he went, he was persuaded over there.’ Military cooperation against IS does not only mean firing bullets. There can be cooperation in logistics and intelligence. Our position is clear. Turkey is ready to [commit to] all forms of cooperation to combat terror.”

On Kerry’s statement, he even went further, picking up on wording that could be seen not only as polemical, but also rude: “It is said Turkey should have done much more. Who did what? Do you have the right to assign homework to Turkey? We warned so many times about Syria. We said it is going bad. So what did you do? Turkey will draw its own road map as dictated by its own interests. We are not obliged to prove anything.”

The ongoing US-Turkish policy differences concerning the Syria file were also reflected in Kerry’s interview with CNN's Christiane Amanpour. He did not hold back from speaking critically of Turkey’s role in the Syrian crisis, saying, “When the efforts to oust [President Bashar al-] Assad took place, there were people who made calculations that the important thing is to remove Assad, yes, there are some bad apples there, but we want to get him out. And that, unfortunately, resulted in funding to different groups, and it was, frankly, a sloppy process. It did not provide the coordinated, concerted effort that was needed. … The theory back in the beginning by many of these people were, 'Well, we’re going to get rid of Assad, and then we’ll focus on these bad apples.' They realized it morphed into something more ominous, more threatening, and so I think people have really pulled back. There’s a sense of purpose now in this focus against [IS]."

In Turkey, his words were perceived as an attack.

Now, irrespective of the lack of trust between Turkey and the West (including the United States), could we safely say that Turkey would now be on board in the anti-IS coalition led by the United States to the extent that Washington wishes and expects it to be?

Probably not. One reason is that — like everyone else nowadays — Turkey has no coherent and well-defined policy in the Middle East and hence toward IS.

Also, as Bayram Balci, a Carnegie fellow in Europe, accurately analyzed, Turkey’s procrastination and prevarications toward IS illustrate Ankara’s fears that an extension of the Syrian crisis and a stronger role for the Kurds, including the Kurdistan Workers Party, will not be in Turkey’s security interests.

Marc Pierini, a former ambassador of the European Union in Ankara who knows and follows the situation fairly well, cites another valid reason:

“Will Turkey now take an active role in the anti-Islamic State coalition? There are rumors that it will play some part, but this role may remain limited. As much as Turkey enjoys the protection of NATO’s Patriot missiles against the Syrian regime, Ankara is perhaps not willing to appear an active member of a war operation against what was initially a Sunni insurgency movement in Syria.

"That is not because Turks approve of the Islamic State’s horrendous violence but because the group’s anti-Western narrative (invoking crusades and the Sykes-Picot agreement) has a certain appeal to Turkish religious conservatives. In any event, Turkey under the Justice and Development Party (AKP) has never wanted to appear to be aligning itself with Western policies."

Ankara is contemplating a number of options to safeguard its security: to take a more active part in the anti-IS coalition so as not to jeopardize its relations with Washington further; not to rock the boat with the Kurds and spell the end of the “peace process” in Turkey (with fatal consequences for the AKP government); and to remain consistent with its avowed objective of removing the Damascus regime.

All these ends are hard to reconcile. That is why there is a passionate debate in Turkey over a buffer zone, a security zone within the Syrian territory, a "no-fly" zone and “security pockets” within Syria, stretching along the 910-kilometer (565-mile) Turkish-Syrian border.

Confusion prevails on all fronts.