While Presidents Barack Obama and Recep Tayyip Erdogan remain sharply different in their values and interests, the US-Turkey relationship is as strong as ever — and much more wary. 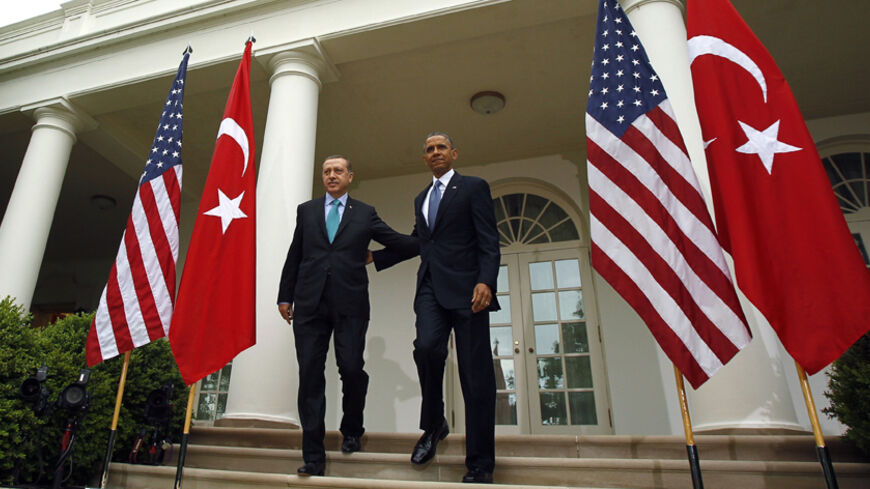 Turkey’s alleged support to radical groups in Syria has long been a watershed issue, setting a new challenge for sowing conflicting interests and contradicting values among allies. While addressing the UN General Assembly on Sept. 25, Turkish President Recep Tayyip Erdogan slammed those accusing Turkey of somehow aiding or turning a blind eye to these terror groups. He instead argued that due to the international community’s inability, his country’s security is jeopardized by these terror organizations, turning the areas around Syria and Iraq to “free regions” and pulling together these jihadists like a magnet.

Turkish Prime Minister Ahmet Davutoglu echoed the same accusation against the international community for its inaction in toppling the Syrian regime. “If [the international community] had implemented a 'no-fly' zone across Syria when we first proposed it, the Islamic State [IS] would not have had the means to expand as widely as it has today,” Davutoglu said Sept. 20. “Once the [Syrian] regime bombs, the opposition ends up withdrawing from the areas under its dominance and escapes to safer areas. IS rapidly fills in this void. This created a tactical coalition between IS and the [Syrian] regime. This is what led the IS threat to grow bigger.”

While the Erdogan-Davutoglu pair scolds the international community for not following their advice in efforts to oust Syrian President Bashar al-Assad, they strongly deny any misconduct in their policy. The more the Turkish government continues the blame game, though, the more the US administration signals that it could also do the same. For example, Francis Ricciardone, US ambassador to Turkey until July, said Sept. 12 that Turkey has actually worked with al-Qaeda-affiliated groups in Syria such as Jabhat al-Nusra and Ahrar al-Sham.

US Secretary of State John Kerry followed up on these remarks Sept. 24. “In the very beginning, when the efforts to oust Assad took place, there were people who made calculations that the important thing is to remove Assad: ‘Yes, there are some bad apples there, but we want to get him out,’” Kerry said in an interview with CNN’s Christiane Amanpour. “They realized it morphed into something more ominous, more threatening, and so I think people have really pulled back.”

Although Erdogan denounced IS as a bloody terror organization and committed Turkey to taking either a logistical or a military role in the US-led coalition of the willing against IS, it is no secret that the Erdogan-Davutoglu duo argued all along that once Assad goes, radicalism will vanish in Syria and that there should be no real concern about increasing the fighting power of these radical groups against the Syrian regime, since they are better at inflicting more damage than the disorganized opposition.

Erdogan and Davutoglu in fact tried to bring to power the Muslim Brotherhood in Syria and in other Arab countries rocked by the revolutionary developments in the past three years — witness their exceptional support to the Muslim Brotherhood in Egypt. Erdogan was critical of the UN body for sitting on the sidelines when the military took power in Egypt. “While the United Nations watches the military topple Egypt’s elected government, those who conduct the coup are being legitimized,” Erdogan said. “The UN should be more forthcoming in defending the truth. I never approve terror done in the name of religion, and I believe it is disrespect to mix religion and terror.”

Addressing the UN General Assembly Sept. 24, US President Barack Obama was in full agreement with Erdogan that Islam only teaches peace, but he also urged that especially the Muslim communities reject extremist ideology in the name of Islam “explicitly, forcefully and consistently.” Still, though, the Erdogan-Davutoglu team may not have the same perception of alertness toward IS or in the general extremism threat in the region from the misconception of Islamic teachings. There is, after all, more empathy toward the radicalization trend in the region where Erdogan-Davutoglu argue that the US misconduct of denying the Sunni population in Iraq a fair role in the making of the new Iraq created the fertile environment for these violent extremists. Obama, however, argues that it is time to stop hiding behind excuses. “The task of rejecting sectarianism and extremism is a generational task — a task for the people of the Middle East themselves,” he said. “No external power can bring about a transformation of hearts and minds.”

Still, though, Kerry said Sept. 23, “Turkey had an initial challenge with respect to its hostages, and that being resolved now, Turkey is ready to conduct additional efforts along with the rest of us in order to guarantee success. And we’re very grateful to Turkey for that willingness." While Turkey’s support as a NATO member country is critical in US efforts in fighting the extremists in the region, Obama seems to hint that there is a growing list of conflicting interests and contradicting values with the Turkish government.

Eloquently expressing the failures and missteps of the United States, Obama said, “[W]e fight for our ideals, and are willing to criticize ourselves when we fall short. Because we hold our leaders accountable, and insist on a free press and independent judiciary. Because we address our differences in the open space of democracy — with respect for the rule of law; with a place for people of every race and religion; and, with an unyielding belief in the ability of individual men and women to change their communities and countries for the better.”

This approach is in stark contrast with Erdogan’s majoritarian democracy: His rampant interference to judicial proceedings, especially in the aftermath of the December 2013 graft probe's putting his government under criminal spotlight; his accusing the US-based Sunni cleric Fethullah Gulen and his followers of being a terror organization aiming to overthrow his government; his seizure of the government's checks-and-balances system; and his government's growing pressure and restrictions on the media.

There are still so many questions about these legal proceedings that one would wish them to see the light of day. And if this is the picture of Turkey in Obama’s mind, this will be a country prone to instability and chaos. And if the Erdogan-Davutoglu pair is correct that people’s subjugation to injustice and unfairness can be considered a pretext for violent behavior, then Turkey, too, is in danger in falling into the terror quagmire.

Turkey might still have the chance to undo this possibility, but Erdogan has come a long way in putting his ideological policies in place, denying the country a real chance of normalization in embracing all differences in its social fabric. Still, though, the United States will remain glad to see Turkey on board in any capacity possible in the fight against IS, and all these conflicting interests and contradicting values will be put to sleep — until the next rift comes around.