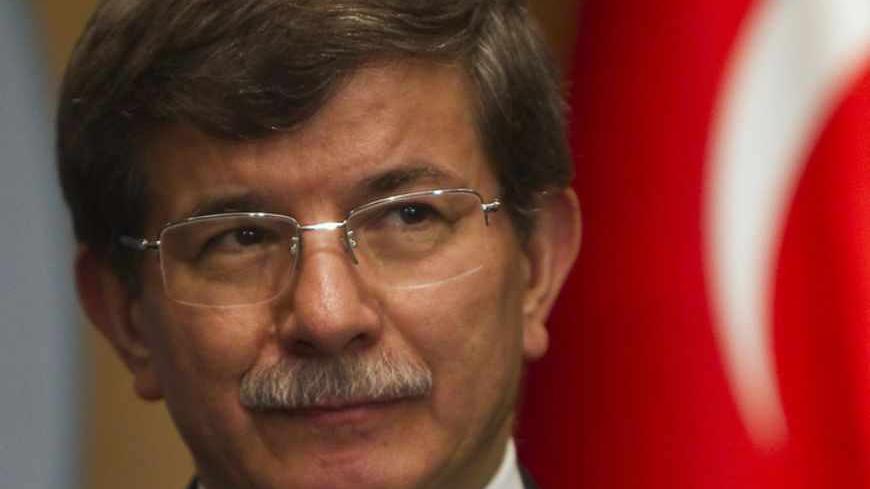 Turkish Foreign Minister Ahmet Davutoglu publicly expressed concern for the first time on May 7 that Syrian President Bashar al-Assad is taking steps to divide the country.

Speaking to the Turkish media on Tuesday [May 7] in London, Davutoglu argued that Assad has attacked the Sunni population in Baniyas to cleanse this part of the land for Alawite domination. "The Syrian regime is trying to clear a corridor between Homs and Lebanon," said Davutoglu. "In the Baniyas massacre, what concerns us is this: Considering that it's not possible to control the whole country, [Assad] has switched to a strategy of ethnically cleansing some areas, and to gain power there. This is what's discussed as plan B on the agenda, a strategy built upon ethnically cleansing [a part of the land] to open space and corridor for a certain sect."

Four years after being sworn in as Turkey's Foreign Minister though, Davutoglu still speaks like an academician assessing the events on the ground as if his policies carry no responsibility in the making of this chaos. "The Syrian regime has followed four stages," he said he explained to US Secretary of State John Kerry on their Monday [May 6] telephone conversation. "During the first stage, snipers targeted peacefully demonstrating people. This went on till March 2011. On the second stage, he punished a city all together by artillery and tank fire. Like in Hama, Homs, and Bab-i Amr, people started to react to that. Once the rebellion spread to cities, and neighborhoods, he moved on to the third stage, and started to use air power. The rebels moved to urban areas. Now he is at the fourth stage and firing Scud missiles [on the people.] All this escalation was for taking control of the whole country."

In the meantime, Turkey has worked with the Saudis and Qataris and allowed its near 800 km-long border with Syria to be used from the very beginning by the Syrian rebels to transfer arms into the country, and helped make an already bad situation worse. The Syrian regular army surely has a clear advantage over the rebels, but the more the opposition is provided arms, the more Assad kills. And it's even more of a contrast for Davutoglu to speak about human rights as a priority when he allowed Saudis and Qataris to infiltrate weapons and support all the radical and Salafist groups to gather for their selfish interests in Syria, as neither of the countries can honestly talk about their human rights record.

While Davutoglu expresses concern about the attacks to the Sunni villages though, Turkish Prime Minister Recep Tayyip Erdogan's government's policy from the very beginning has been regime change in Syria. While Assad continues to remain in power even after fighting a three-year bloody civil war, one really needs to question who does what exactly to stop the bloodshed. The fact of the matter is that expressing pity does not help save lives, and providing more arms to the Syrian battlefield only invites more tragedies.

Now Turkey is expressing concern over Syrian territorial integrity. While Davutoglu academically assesses the situation quite well that the failure of scoring a quick victory against Assad created the risk of a potential break-up of Syria, he just takes an attitude of "I told you so," as if his policies carry no weight in shaping the developments on the ground. From regional leaders to intellectuals, many analysts have been talking about this potential fragmentation for a long time now as part of the World War I legacy in the region, but there is also the fear of growing radical and extremist Islam.

While Turkish leadership expresses no concern about those radicals and extremists, Jordan's King Abdullah II takes a different look. He considers the failure of the Assad regime as a boost to the rise of the Muslim Brotherhood and Salafists in the region encircling his country. And he sends a chilling warning to US President Barack Obama about it. According to a report published on Al-Safir on April 4, Abdullah told Obama during his visit to Jordan, "I am not willing to transform the Jordanian border into a platform for launching a war against Syria, as the situation is on the Turkish-Syrian border."

In other words, Abdullah does not necessarily see Turkey as innocent of the ongoing bloodshed on the Syrian battlefield, and moreover considers this NATO ally as helping the radicals just for the sake of ousting Assad from power.

All that the Erdogan-Davutoglu team talks about is expressing sorrow for the dead, and that Assad needs to go. There is, however, certainly no need to worry over whether Assad stays or not, but until that moment comes, all the players, regional and international, have a responsibility to help curb the violence. Assad will go anyway, sooner or later, but somebody needs to help make a cease-fire possible to save lives on the ground.

John Kerry and his Russian counterpart, Sergei Lavrov, on May 7 brought their heads together to achieve that kind of a ceasefire, putting aside their differences over Syria and calling for urgent, international talks before the end of this month to find an exit strategy to end this bloodshed.

The obvious contrast is that it's now the US that's concerned about Syria not being able to hold onto its territorial integrity and state structure. Turkey, however, is still fixated about telling the facts that there is a human tragedy taking place in Syria, but it has yet to prove that it can actually make a difference with its work behind closed doors.

Western sources speaking to Al-Monitor in Ankara say a Syrian break-up is in the cards, now more than ever, and that a potential Kurdistan at Turkey's borders will be in the making even before Turkey completes its negotiations with the PKK. These sources also tell Al-Monitor that there are roughly 1,200 small and big opposition groups in Syria, and the challenge is that they're so fragmented that it's almost impossible to bring them under any kind of control.

However, Turkey is still talking about persuading the US to provide lethal arms to the opposition to oust Assad from power. In the beginning, Turkey asked the support of the international community to establish no-fly zones over Syria. It did not happen. The region is familiar with the no-fly zones first established after the first Gulf War by the US, United Kingdom and France to protect Kurds in northern Iraq and Shiites in the south from Saddam Hussein's cruelty. While Iraq's territorial integrity remains intact, there are still concerns about its potential break-up, and many consider the Iraqi Kurdistan almost an independent entity. The point is, what Davutoglu expresses as a concern does not really match his government's policy proposal — as they are still trying to persuade the international community to establish no-fly zones in Syria.

Still though, Turkish officials speaking on condition of anonymity told Al-Monitor that if only the opposition is provided all the arms they need, they will be able to speedily end the Assad regime. They, too, however, when pressed with questions, cannot provide any confidence that there will be a central government formed after Assad that will be able to control the country as a whole. "It's probably not going to happen for a long time," one Turkish official told Al-Monitor. More troublingly, the Wall Street Journal reported May 8, "Israel has warned the US that a Russian deal is imminent to sell advanced ground-to-air missile systems to Syria." These would include six launchers and 144 missiles due in three months. These are "weapons that would significantly boost the regime's ability to stave off intervention in its civil war."

Hopefully when Obama meets Erdogan at the White House on May 16, Obama can persuade Erdogan to relax his policy of regime change in Syria and support the US-Russian initiative in bringing the opposition and the regime together. Whether Assad stays or goes should be less of a priority than achieving a cease-fire to save lives, and keeping Syria intact.