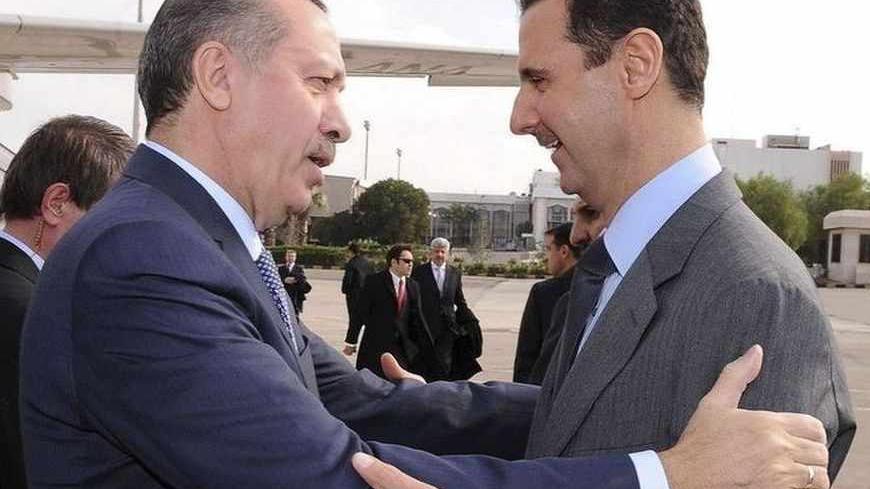 On Wednesday [July 24] Turkish Prime Minister Recep Tayyip Erdogan led a critical meeting of Necdet Ozel, chief of the General Staff; Besir Atalay, deputy prime minister; Sadullah Ergin, minister of justice; Ahmet Davutoglu, minister of foreign affairs; Muammer Guler, minister of interior; Ismet Yilmaz, minister of defense; Efkan Ala, counselor at the prime ministry; and Hakan Fidan, head of Turkey's National Intelligence Organization (MIT) to discuss the latest developments regarding the Kurdish movements at the Turkey-Syria border. Turkish media speculated that they also discussed enforcing a no-fly zone at that segment of the 951-km [591-mile] border line with Syria where Kurds are in the majority.

Since last week, as it became clear that the Kurdish Democratic Union Party (PYD) has taken full control of tracts of land adjacent to the Turkish border, Ankara started to warn Kurds against any de facto declaration of autonomy but refrained from tying it to the solution process with the Kurds in Turkey. “We won’t allow the developments outside our borders to impact the resolution process negatively,” Davutoglu said. “Turkey has to take certain measures for the security of its borders, but these measures are not directed against any particular group.”

If that is the case, however, there is also no need to even speculate about establishing a no-fly zone across the border in Syria, or talk about any concern regarding the Kurdish advances along the borders. Turkey has been proposing to establish a no-fly zone almost from the beginning of the Syrian civil war more than two years ago, but it has also made it clear that it won’t take a unilateral military action toward Syria. In fact, such a move would be a detrimental element for Turkish stability in all aspects — including its economy.

More importantly, there is no sign that the international community is preparing to engage in any overt military action inside Syria. “I don’t believe that the United States will take any military action against the Syrian regime until it becomes clear how it will be possible to talk about some sort of stability in Egypt again,” Umit Ozdag, chairman of the 21st Century Turkey Institute, an Ankara-based think tank, said, arguing that the military coup in Egypt has extended the lifetime of the Bashar al-Assad regime.

In that perspective, Al-Monitor Editor and CEO Andrew Parasiliti’s exclusive interview with the Republican chairman of the House Armed Services Committee completes this perception in Ankara that there won’t be a US-led military action into Syria to end the Bashar al-Assad regime any time soon:

"[Howard P. 'Buck'] McKeon, who represents California’s 25th district, was cautious about a deeper US military engagement in Syria, in contrast to his counterpart, Carl Levin, the Democratic chairman of the Senate Armed Services Committee, who has proposed a US no-fly zone and consideration of limited US military strikes on Syrian targets,” Parasiliti wrote July 24. “If the president came to the House asking for authority to go in Syria, I don’t think he could get the vote on either side of the aisle,” McKeon said. “These people understand America, and right now they don’t want another war. We’ve been fighting the longest war in our history [in Afghanistan]. I think people would like the time to take a breath, so they’re not looking for another one. If they were, say Americans were instead of 70% against going in [Syria], they were 70% for it, then there might be some reason to bring it up in the House.”

Further completing this thought, Ryan Crocker, a veteran US diplomat and a former ambassador to Syria (1998-2001), also suggested that it may be time to accept and get ready to see Assad prevailing this conflict. “There is little the United States can do to positively influence events in Syria,” Crocker wrote on July 24. “Our focus must be on preventing further spillover beyond its borders. There may come a point where exhaustion on both sides makes a political solution possible. We’re nowhere near that point. And my fear is that at the end of the day, the Assad regime prevails. We must be ready for that too.”

The concern over the spillover of the Syrian civil war has been there since the beginning and it remains as a real challenge. However, Turkey seems to have trapped itself in a difficult corner to exit because it has been covertly extending support to radical and extremist groups trying to end the Assad regime. So far though, the efforts of Ankara and all the others have proven unsuccessful. “Russia, Iran and Hezbollah have stood firm behind their ally [in the Syrian regime], whereas the United States and others have kept debating whether to provide lethal or nonlethal weapons to the opposition,” Ozdag told Al-Monitor.

And the question of what is next for Turkey in coping with the challenges it perceives as coming from the Kurds in Syria remains. Davutoglu argues that Turkey won’t accept any de facto declaration of Kurdish autonomy in Syria until a new Syrian parliament is established once again and Assad era comes to an end. As an academician, he may certainly argue the point. As a practitioner, however, he may consider that these things do happen (calling for autonomy, etc.) when there is chaos on the ground.

What is more interesting is that Erdogan has taken pride for the past decade in reforming and therefore balancing the country’s foreign policy approach between the East and the West. His Justice and Development Party (AKP) government has been overtly critical of past Turkish administrations for turning their backs on the region and pursuing low-profile relationships with the Arab countries while favoring ties with Israel. In the end, one needs to question what Turkey has gained with all this policy shifting and new orientation of the Turkish foreign policy.

The Turkish prime minister had adopted Assad as his brother and built an exceptionally close relationship — until August 2011, when Erdogan declared a policy to topple the Syrian regime. But Assad still remains in power and Ambassador Crocker warns that the world may have get ready to accept Assad prevailing in this conflict.

As I stated on July 17in Turkey’s Erdogan Problem, the prime minister decided not to run for parliamentary elections again, and he has played all his cards to be the country’s first elected president in August 2014 and hopefully under a newly adopted presidential system, it looks difficult for him for now to achieve at least the latter part.

In that case, could it be possible that Assad also lasts longer than Erdogan in power? Could it be possible that Syrian President Bashar al-Assad will prevail this conflict and Erdogan’s term as prime minister end before seeing his departure from power? That would be something for the Erdogan-Davutoglu team, who have been so arrogant in their approach to the Middle East, and insulted previous Turkish governments for not knowing anything about the region.

The jury is, however, certainly out on the final chapter in this episode. I’m just stating the possibility and the challenges ahead, where it looks quite difficult to trust that the Ankara government knows what it is doing before taking its step forward on anything concerning the region.