Turkey's hesitation to act against groups such as the Islamic State makes others wonder whether it has an ideological foreign policy. 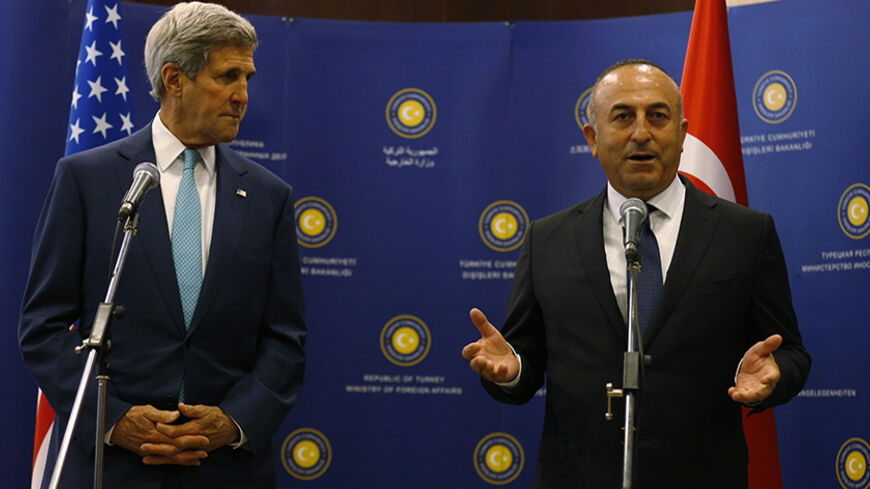 Until now, the Turkish government has condemned all those claiming it supports extremist terror groups in Syria. The government, however, has been maintaining silence since Francis Ricciardone, US ambassador to Turkey until July, said openly last week that Turkey has actually worked with al-Qaeda affiliate groups in Syria such as Jabhat al-Nusra and Ahrar al-Sham. “The Turks frankly worked with groups for a period, including Jabhat al-Nusra, whom we finally designated as we’re not willing to work with,” Ricciardone said Sept. 12, emphasizing that the Turkish side believed that Turkey could benefit from the groups' fighting ability against Syrian President Bashar al-Assad and at the same time reshape them to become more moderate.

Although Ricciardone became the first US official — albeit a newly retired one — to openly speak out against Turkey’s mishandling of these terror groups, a US official speaking to the McClatchy news service on Sept. 12 disputed that the Turks directly worked with Jabhat al-Nusra, instead arguing that Ankara allowed the group operating space. “For quite a while, Turkey, at the very least, turned a blind eye to it,” the US official said. “It’s only in recent months that they’ve done a 180 and now recognize the dangers posed by [IS] and other extremists.”

US Secretary of State John Kerry, however, gave a more positive message when he was in Ankara on that same day, Sept. 12. “Since 2011, Turkey has opened its doors to roughly 1.3 million Syrian refugees, and more recently they’ve had a huge influx of Iraqi refugees who are fleeing [IS],” Kerry said, standing next to his Turkish counterpart Mevlut Cavusoglu. “The United States and indeed the entire international community are very grateful for Turkey’s generosity in providing shelter and care, food, to these refugees.” Kerry added, “So let me be very clear about the US-Turkey relationship in this coalition. Turkey and the United States will stand together against any challenges in the region, including all terrorism. Within the coalition there are many ways that Turkey can help in this effort, and we will continue our conversations with our military and other experts spending time to define the specific role that Turkey will play.”

While Turkey is clearly hesitant about fully coming on board in support of the US-led coalition in the fight against IS militants in Syria and Iraq, these conflicting US messages were attention-grabbing, coming as they did on the heels of the German weekly Der Spiegel’s August reporting that US, British and German intelligence agencies spied on Turkey. Could the spying have had to do with the Turkish government’s alleged support of these terror groups? A Wall Street Journal editorial took the West's unease to new heights on Sept. 15, saying, “Incirlik has been a home for US forces for nearly 60 years, but perhaps it's time to consider replacing it with a new US air base in Kurdish territory in northern Iraq.” The editorial also stressed that since Secretary of Defense Chuck Hagel listed a “core coalition” of 10 countries in the fight against IS, Britain categorically ruled out military strikes in Syria, Germany ruled out any use of force and Turkey is now backpedaling.

Ozdem Sanberk, former ambassador and president of the International Strategic Research Organization (USAK), an Ankara-based think tank, underlined first and foremost that this is not a NATO operation. Sanberk stressed that despite the government’s rhetoric about a “New Turkey,” the country’s foreign policy continues to rest on one key principle. He said that if there were a UN Security Council (UNSC) resolution, if this were a NATO operation or if Turkey were to come under direct attack, Turkey would have no hesitation about being fully on board. “Turkey allowed Incirlik air base to be used for years to enforce the no-fly zones in Iraq in the aftermath of the first Gulf War,” Sanberk told Al-Monitor. “There was a UNSC decision [then].” He pointed out that there is neither a Security Council decision nor a NATO council decision for the military operation against IS, and stressed that the US plan seems to be destined for failure for various reasons.

The Turkish government, however, is undoubtedly in a difficult position in terms of explaining itself. Atilla Kart, the Konya deputy for the main opposition Republican People's Party (CHP), said Sept.13 that in the space of just two days last week 53 families — 16 from Konya — went to Syria to join the IS militants. Kart said he would have shared all he knows about these developments with Turkish Prime Minister Ahmet Davutoglu on Sept. 12 had Davutoglu not canceled their scheduled meeting at the last minute.

While there is a worrying trend of Turkish families joining IS, analysts in the Ankara beltway stress that the real issue is not that the numbers are high but that all those going to fight in IS will come back one day. Still, there are more voices arguing against Turkey fully joining the fight against IS. The daily Star's Ibrahim Kiras wrote Sept. 15, "If we join the military operation against the Islamic State, we would become the subject of the Sunni Arab world’s hate and our enemies' desire to use this against us for many years.”

Rusen Cakir of the daily Vatan also weighed in on the issue, reopening yet again the debate over who carried out the May 2013 Reyhanli terror attack that left 52 dead — the single deadliest such attack in Turkey. “If Turkey openly becomes a part of this coalition against IS, it won’t only risk the lives of its [49 Mosul consulate] hostages, but it is going to risk all its citizens’ lives,” Cakir wrote. “IS militants have been using Turkey as a transit passage and they now know the territory too well. Moreover, as the foreign media reports with new examples every day, there are plenty of our people going to Syria and Iraq to fight.”

This picture might have also compelled Turkey to refrain from signing the communique by the Arab countries in the fight against IS on Sept. 11 in Riyadh, creating more questions about Turkey’s position against these extremist groups.

In sum, Sanberk argues that while Turkey is staying true to its key foreign policy principle, its government’s ambiguity in domestic issues as well as in foreign affairs in these critical matters is providing fuel for others to question Turkey’s direction.