PKK issue complicates Turkey’s role in fight against IS

Turkey fears that its agreeing to be part of the US-led coalition against the Islamic State may adversely affect the Kurdish peace process. 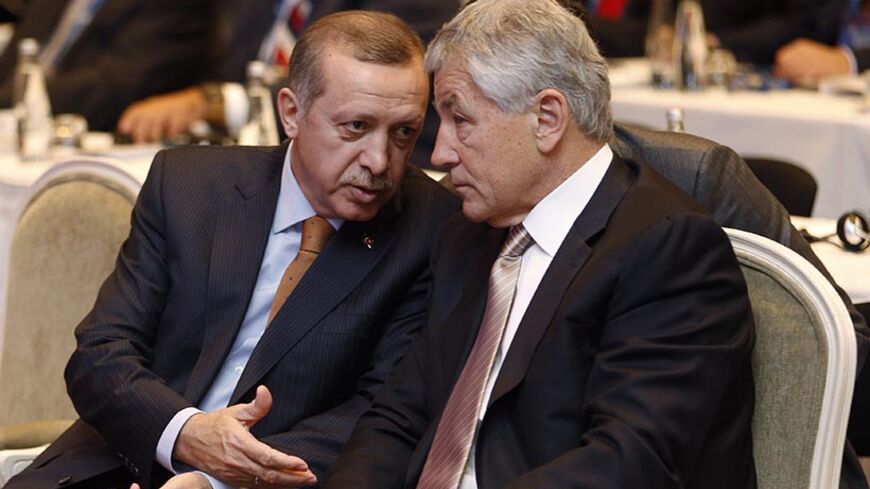 On Sept. 10, US President Barack Obama will outline his administration’s plans for fighting the Islamic State (IS). His secretary of defense, Chuck Hagel, was in Ankara Sept. 9 to see what role Turkey could take in this US-led coalition of the willing against IS militants in Iraq. Although the Turkish side refrained from making any clear public commitment to this coalition, it agreed to be part of it in principle. Turkish Foreign Minister Mevlut Cavusoglu stressed that Turkish officials are worried about a potential backlash that could cost the lives of 49 Turkey’s Mosul consulate hostages held by IS militants since June 11, and are also concerned about Kurdistan Workers Party (PKK) members acquiring more weapons.

"We expressed our concerns" during last week's NATO summit in Wales, Cavusoglu said, with a warning. "The Iraqi Security Force is 95% composed of one sect. Therefore, it may not be possible to control where these weapons will go. If there will be any kind of support, all of these components should be thought about critically and acted upon accordingly."

Hagel, while avoiding mention of the Shiite factor in the Iraqi army and Turkey’s implied concern about a more influential Iran, stressed that the Turks expressed concern in the meetings about the PKK turning out to be a beneficiary in the fight against IS. “But they didn't indicate to me in any way that they saw the PKK as a more significant threat to them than [IS],” he said. “The concerns they have, as I said, not unlike many of our concerns about arming any group of individuals, are always legitimate. And that's why we are so careful in who we provide armaments to.”

Analysts in the Ankara beltway pointed out that the IS threat would not have become so great had Turkey not focused so much on toppling Syrian President Bashar al-Assad that it allowed radical groups such as IS to use Turkish territory to infiltrate into Syria to stage war there.

Ozdem Sanberk, former ambassador and president of the International Strategic Research Organization (USAK), an Ankara-based think tank, said Turkey’s misreading of the Syrian crisis only increased the challenges the country faces in this traditionally difficult geography. “Providing arms to these radical Islamic groups one way or another was wrong, and that is why we are at this stage,” Sanberk told Al-Monitor. “We are now trying to figure out how to resolve this.”

Turkey is presenting a contradictory point of view by focusing on the perceived threat from the PKK while at the same time engaging in peace talks with its imprisoned leader, Abdullah Ocalan, to resolve the Kurdish issue. Sirri Sureyya Onder, Istanbul deputy of the People's Democracy Party (HDP), for example, claimed Aug. 26, “If the PKK had been disarmed by now, IS militants would have reached Adana.” Selahattin Demirtas, Hakkari deputy and co-chair of the HDP, also argued Sept. 3 that the PKK should indeed be provided arms to fight against IS militants.

“The PKK is the one fighting against IS militants there. Turkey should start thinking about what it will do when the PKK asks for arms to fight this fight,” Demirtas said. “If Turkey is really going to make peace with the Kurds, why not?”

Sanberk pointed out that foreign policy is an art of contradiction management, and that Turkey needs to be careful how it positions itself in this new coalition of the willing against IS. “Turkey has never engaged in any armed conflict in its region unless it is directly targeted. The allegations about its support to these radical groups is one thing, but a military operation is something totally different.”

Kemal Kilicdaroglu, the main opposition Republican People's Party (CHP) leader, also said Sept. 9 that his party won’t oppose Turkey being part of this coalition against IS, also often referred to as ISIS. Still, the public knows little about what all this will mean.

A senior US defense official described Turkey as being “absolutely indispensable to the ongoing fight against ISIS,” and said the coalition would need Turkey to provide support and supplies. After making a reference to working with "the peshmerga and the ISF [Iraqi Security Force]," the official said, "We'll need support on intelligence-surveillance-reconnaissance. We'll need support on refueling and airlift. We're gonna need support on training.”

Analysts in the Ankara beltway, however, expressed caution about the Turkish government's approach to IS. Umit Ozdag, head of the 21st Century Turkey Institute, an Ankara-based think tank, said Turkey needs to call the IS' bluff. “Turkey should determine the location of its hostages, and see which Arab tribes are holding them. It should then give a clear ultimatum to IS, saying that if they don’t turn its diplomats in — let’s say, two days — Turkey will turn against them,” Ozdag told Al-Monitor. “A Turkey actively hostile to IS can cause it great damage because Ankara holds the power to block all of IS' logistical support lines. But I assume the Turkish government is pleased that its 49 hostages are creating an excuse for it not to take an active stand.”

Ozdag added, “Kurds have already acquired enough weapons in the past decade. The arms that will now be provided will not change the [military] characteristics of the region, or have a big impact in changing the balance of power. On the contrary, if Turkey becomes a part of the coalition, it will have more opportunity to monitor where the arms are going. To me, it seems that the Turkish government is providing excuses but is not really bothered by IS. A state that is really troubled by this organization would act differently.”

Hasan Unal, head of the department of international relations at Atilim University, concurred that Turkey’s position against IS got even more blurry after IS took the Turkish diplomats hostage almost three months ago. He stressed that Turkey’s reluctance to get fully on board with the coalition will only strengthen the Kurdish position. “The Turkish side requires that the PKK be disarmed in the peace process. In that case, the state cannot approve any potential arms delivery to the PKK. Second, it is also not preferable for Turkey to see the Iraqi Kurdish side reinforced militarily because that could trigger their [Kurds'] ambition of segregation. More arms constitute a direct challenge to Turkey’s principal strategic interests. But Turkey’s tactics are wrong in confronting this,” he told Al-Monitor. “If Turkey fully becomes part of the coalition, then why would they need the peshmerga? Turkey would be more than enough to [fight the battle.] Turkey should be up front in challenging the IS threat, as it is a real and a serious threat to Turkey’s national security as well. … Moreover, if Turkey doesn’t want Iraq to be split into three parts, it needs to defeat the Islamic State.”

Sounding more cautious, Sanberk said the base of the ruling Justice and Development Party (AKP) might be displeased to see the government actively taking arms against IS. “It may not be totally right to claim that the AKP base will turn against the government if it becomes part of this coalition, but this is one of the elements in everyone’s mind [as base members are more sensitive about their Sunni identity]. In politics, it is sometimes difficult to explain everything in words, but this constitutes a critical consideration in the AKP calculation moving forward.”

Sanberk also stressed that Turkey’s Kurdish peace process has no chance to be negatively impacted by the Ankara government taking arms against IS, as the peshmerga is already fighting against the terror group. Turkish Prime Minister Ahmet Davutoglu also expressed hope that this issue will be resolved no later than 2015 — when Turkey heads to the polls for a general election.

In a final note, Unal said the government would need to bring a vote to parliament if it agrees to open its military bases and territory to use by the US-led coalition of the willing against IS.