Will Turkey put 'boots on the ground' in Syria?

The Turkish parliament is expected to vote Oct. 2 on whether to authorize a government request to allow the Turkish military to be engaged in Iraq and Syria. 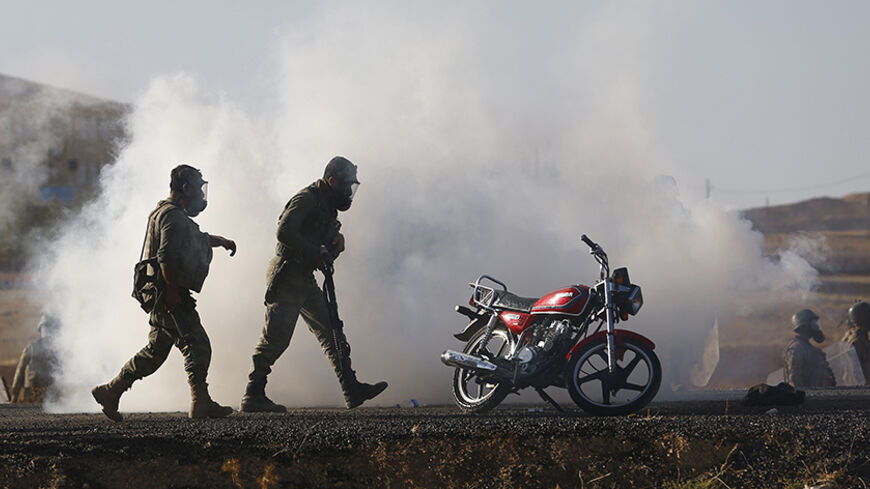 Turkish security forces use tear gas to disperse Turkish Kurds near the Mursitpinar border crossing on the Turkish-Syrian border, near the southeastern town of Suruc, Sept. 26, 2014. - REUTERS/Murad Sezer

When the Turkish parliament reconvenes Sept. 30 after a summer recess, the Turkish government is expected to submit authorization requests detailing Turkey's potential role in the US-led coalition against the Islamic State (IS) in Iraq and Syria. On Oct. 2, the parliament is expected to vote on the requests, which are likely to ask for authority to engage Turkish ground forces outside Turkey's borders. Separate authorization requests are expected for the Iraqi and Syrian theaters.

Although the Turkish opposition stands firmly against using ground forces outside the country's borders, the government appears to be arguing for a broad authorization in case there is a sudden strike against Turkey, while at the same time arguing that Turkey will mainly provide logistical and humanitarian support to the coalition. Turkish President Recep Tayyip Erdogan detailed Turkey’s plan on Sept. 27 while saying he was attempting to persuade the international community to establish a safe zone inside Syria along the Turkish border, a "no-fly" zone in Syria and military training for the Syrian opposition to bring about the end of the Syrian regime. Ankara still considers the main problem in Syria to be its long-lasting authoritarian government; top Turkish leaders think that once Syrian President Bashar al-Assad goes, all will be normalized in the country in a matter of time.

Erdogan said Turkish ground forces might form a part of achieving this goal. “If there is a military operation, who will protect our borders? The military. Therefore, if there is a threat to the homeland, the military will engage in a military operation,” Erdogan said, while leaving the mission of such an operation vague. And it so happens that the US-led coalition's goal is not to end the Assad regime, but to eliminate the IS threat.

However, Ozdem Sanberk, a former ambassador and president of the International Strategic Research Organization, an Ankara-based think tank, reiterates what he told Al-Monitor Sept. 15: There still is no UN Security Council resolution, NATO decision or a direct threat to Turkey to legitimize its potential military action outside its borders. The United States and others still seem determined not to put boots on the ground in either Iraq or Syria.

What exactly Erdogan promised in his talks with US Vice President Joe Biden last week, however, is bound to create more confusion. It is as if history is repeating itself sooner rather than later. When Erdogan visited the White House in December 2002 to talk about whether Turkey would commit to giving US troops a northern access into Iraq, he was not even elected to the parliament. Today, he also has no official capacity under the constitution to talk about engaging the Turkish military in any operation outside its borders — it is the government, and more specifically the parliament, that has the last word on such a decision.

For the parliamentary debate to happen, one-third, or 184, of the parliamentarians need to be present. No decision can be made with less than 137 votes, or one-fourth of the legislators. There are a total of 550 seats in the Turkish parliament, where the ruling Justice and Development Party (AKP) has 312, the main opposition Republican People’s Party (CHP) has 130, the Nationalist Action Party (MHP) has 52 and the People’s Democracy Party (HDP) has 27. This means that the government can pass the resolution without opposition support.

Akif Hamzacebi, CHP parliamentary group deputy chairman and Istanbul deputy, said Sept. 29 that while Turkey should help the coalition in the fight against IS, it should not take part in the military operation. “Turkey is a country in the region. We are neighbors to Iraq and Syria,” he said. “We will live together for centuries. If Turkey engages in any ground forces operation, this will have a lasting negative impact in relations.”

Faruk Logoglu, CHP Adana deputy and former Turkish ambassador to the United States, also argued that his party should vote against both of the requests asking for authorization to engage the military outside Turkey's borders. “Turkey is trying to manage the responsibility of almost 2 million Syrian refugees inside our borders. If the Turkish military puts its boots in the Syrian theater, Turkey will likely be left alone to manage that crisis, too. No Western country wants to put their boots on the ground there. And the Arab countries don’t have the capacity to do the work to eliminate that threat,” he told Al-Monitor. “The best thing that Turkey can do to help this coalition is to eradicate the financial supply lines of these terror groups, smash their recruitment capability, end their oil smuggling and provide full control over the border. If Turkey can clean up these terror cells inside its own country, that would be the utmost and best contribution to this coalition.”

Emin Haluk Ayhan, MHP deputy chairman and Denizli deputy, also strongly opposes the authorization request. “The president has no responsibility constitutionally, yet he is the one negotiating with the US on this very critical foreign affairs issue,” he said. “This irresponsible president is making a U-turn by accepting all US requests. The worst is that the prime minister is not fully informed of these negotiations.”

Nazmi Gur, pro-Kurdish HDP Van deputy, echoed the same sentiment and stressed that his party is totally against the government’s projection of taking part in the fight against IS. “We are totally against the Turkish military putting its boots in Syrian or Iraqi territory. We are also totally against the government’s request to establish a 'no-fly' or a safe zone inside Syria. If they deem the border unsafe, they need to specify the reasons for it. Their Sunni alliance created the IS monster. This government has already taken sides in the Syrian civil war for the last three years,” Gur told Al-Monitor. “They need to be more forthcoming about their intentions. If they want to establish their safe zone in three Kurdish cantons on the Syrian side, that simply means that they can’t even foresee the repercussion of such a decision. They better then talk about the end of the negotiation process with the PKK [Kurdistan Workers Party].”

While it is anyone’s guess where the negotiations with the PKK are headed, Erdogan equated the PKK with the IS threat and said the West's passivity threatens Turkish security. “The world is trying to bring a coalition together to cooperate against the threat of IS. While the IS terror organization is causing turmoil in the Middle East, there has been ongoing PKK terror in my country for the last 32 years and yet the world was never troubled by it. Why?” he asked Sept. 29. “When you look at its branches, you see that they are all fed from Europe. All financial support is coming from there — arms, too. Why didn’t this terror organization ever trouble these European friends? Because this terror organization did not carry the name 'Islam.' [The Westerners’] problem is somewhere else.”

This kind of manipulation, trying to portray the Western world as the ultimate enemy of Islam while Turkey is a NATO member country, does not serve Turkey's best interests. Yet, it is likely that Erdogan will get the authorization from the parliament to engage the Turkish military outside the country's borders. If the government chooses to turn this authorization into action by putting Turkish boots inside Iraq and Syria, that will create a new set of risks for Turkey. The reaction of the large mass of refugees will only be the beginning of a long list of possibilities.