The opposition parties turned down a government proposal to set up an investigative commission to supervise the talks with the PKK, writes Tulin Daloglu. 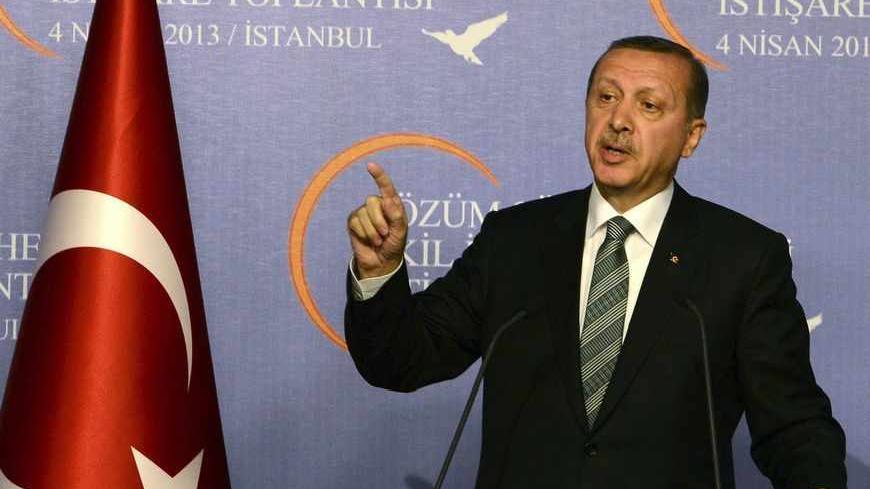 Talk about being for it before being against it. That has been the Justice and Development Party (AKP) government’s position on the need for parliamentary supervision over the talks aiming to end the three decade long Kurdish armed movement in Turkey. For example, Turkish Prime Minister Recep Tayyip Erdogan argued up until few days ago that any parliamentary involvement would be risking to legitimize the separatist Kurdish terrorist organization Kurdistan Workers Party (PKK). He said on March 29: “It’s the government that bears full responsibility [for these talks.]” On April 3, however, AKP proposed to form a parliamentary “commission to evaluate the resolution process.” On Thursday [April 4] both opposition parties flatly turned down the request to  participate in this “investigative commission.”

Deputy Prime Minister Bekir Bozdag strongly criticized the Republican People’s Party (CHP) and Nationalist Movement Party (MHP) for their decision. “It’s tremendously a wrong approach to say that 'we’re not going to participate to the commission' on such a [critical] issue,” he said.

Akif Hamzacebi, deputy chairman of the CHP’s parliamentary group, however, argued: “The proposal to form an investigative commission [on talks with the PKK] are against the constitution and parliamentary regulation rules.”

“When you talk about investigative commissions, the parties will get proportional representation based on their total seat numbers in the parliament. In this way, it won’t be different than the composition of, let’s say, the foreign relations commission where 15 out of 26 members are taken by the AKP,” Faruk Logoglu, deputy chairman of CHP told Al-Monitor. “Our proposal [in June 2012] was completely different. We offered to establish 'societal consensus commission' where each party would have equal representation in it. They would also be the ones to determine the 'wise people,' and that they would directly report to the parliament, not the government. This way, it would present to the nation that the parliament recognizes the significance of this issue and acts upon it with full acknowledgement that it goes beyond political parties.”

Based on the configuration of this proposed parliamentary commission, the opposition parties simply resist against being “extras” – who have no say, but just fill in the seats to make the government look good. There is also the same perception for Erdogan’s list of wise people. “The government has now determined their mission schedule as one month,” Logoglu said.

“They will be talking all around trying to convince the public to support the government.” Adalet Agaoglu, a well-respected novelist, said on CNNTurk on April 4, “If these wise people only follow the government guidelines, and don’t express their own views while engaging the public, they will be no different than being active members of the AKP.”

Addressing the "wise people" on Thursday [April 4] in Istanbul, Erdogan said, “The ones who stand against this resolution simply propose the continuation of the bloodshed. This approach is neither humane nor conscientious.”

Moreover, the opposition is concerned about falling into a trap of following Abdullah Ocalan’s guidelines. On Feb. 28, Milliyet daily had reported a big scoop and published the minutes of the conversation two days earlier with a three-member delegation of the pro-Kurdish Peace and Decmocracy Party that took place on Imrali island where Ocalan is imprisoned. According to the Imrali minutes, Ocalan said the PKK armed groups will only move out of Turkey’s borders under a parliamentary commission’s observation.

“By implication, the government is aiming to make this commission be the witness to the PKK’s withdrawal from Turkey,” Faruk Logoglu, told Al-Monitor. “This is not the business of the parliament.”

Mahir Unal, acting chairman of AKP’s parliamentary group, denied those allegations. “The commission will help the government to inform the parliament on these talks, but they won’t be held responsible to observe PKK’s withdrawal process,” he said. Evidently, the opposition is having difficulty to fully trust to the government.

Moreover, it’s still not clear as to whether the government has really thought about the steps it will take in advance. For example, Erdogan said on March 29 that the PKK militia will move out of Turkey’s borders without their arms. Selahattin Demirtas, chairman of BDP, said, “Ocalan did not give a clear message that the PKK will withdraw without arms.” Demirtas’ remarks came only a day after he met Ocalan on the Imrali island. He said they’re awaiting for a new letter from Ocalan in the next two days.

This not the first time the Erdogan government is aiming to play big in solving this issue. They have also tried it on building bridges with Turkey’s immediate surrounding, too.

“The objective is to settle the Kurdish issue in Turkey to have good relations with neighbors also. But it did not work,” Marc Pierini, former European Union ambassador to Turkey, said on China Radio International’s flagship news chat show Today on Beyond Beijing. “The opening with Syria toward the Bashar al-Assad regime collapsed with the revolution in Syria and the relationship with Baghdad and the Iraqi state are not good. At this moment, Turkey has good relations with one of part of Iraq and that is the Kurdistan Regional Government.”

Simply put, there is no guarantee that the AKP government will get it right this time, and will make — as they claim — all the region’s Kurds face turn toward Turkey. The opposite could also be possible, where Turkey’s Kurds could end up taking Iraqi Kurdistan as a model in establishing first their semi-autonomous state. Therefore, the government could do more if it ceases its efforts to silence the opposition and all other concerned crowds, but really make the effort to turn this into a national project. For now, it’s just so far from it.