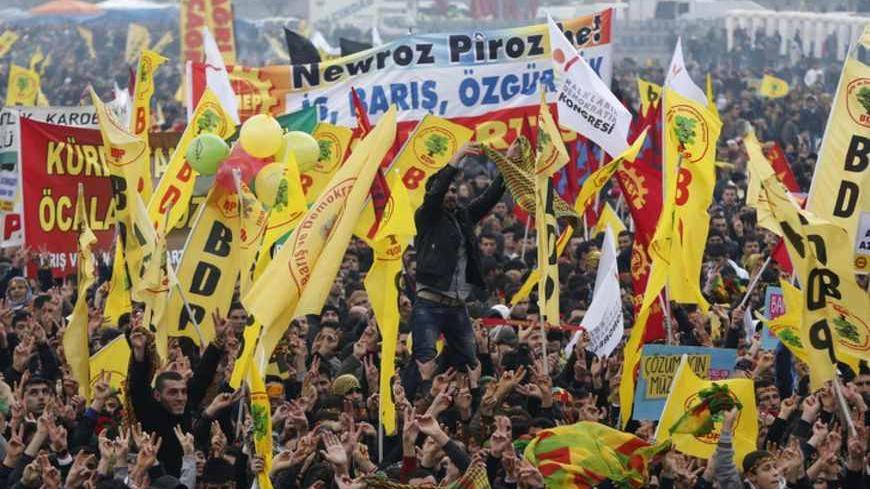 Demonstrators wave pro-Kurdish Peace and Democracy Party flags during a rally to celebrate the spring festival of Nowruz in Istanbul, March 17, 2013. - REUTERS/Murad Sezer

Whether imprisoned Kurdistan Workers’ Party (PKK) leader Abdullah Ocalan will share the fate of former South African president Nelson Mandela, who was also denounced as a terrorist and spent three decades in prison on charges of treason before being released, is a big unknown.

What is clear is that the Justice and Development Party government is satisfied with Ocalan’s contribution to the talks that started in October 2012 aiming at ending the armed Kurdish movement that began in 1984. As a reflection of the AKP satisfaction, a fourth visit by a three-member delegation of the pro-Kurdish Peace and Democracy Party (BDP) to Imrali prison was granted on Wednesday, April 3, which was not announced in advance, and came as a surprise a day before Ocalan marked his 64th birthday.

In the meanwhile, Turkish Prime Ministry released the names of a consultative body of “wise people” who will help the government to explain to the public that these efforts will bring peace to the country. Many reluctant and hesitant Turks, however, expressed on social media that the way the debate is being framed is wrong to start with. “Only an insane person needs to be convinced that peace is good,” a tweet read. "What’s being tried here is to convince the public of the 'shape of peace.'”  Many are worried that their voices are unheard, and that they are being goaded to accept an imposed deal despite their reservations.

Some noted the 63 names on the “wise people” list are people considered as being close to the government. After all, it is the prime minister who decided on these names without consulting the parliament, and therefore ignoring the opposition as a whole. Deputy Chairman of the Republican People’s Party Haluk Koc said, for example, “It’s being understood that these wise people will conduct the same services as the ones who prepare the prime minister’s speeches, or his election campaign.”

Deputy Prime Minister Bulent Arinc dismissed these concerns on Wednesday, April 3, and said that these are “well-respected people whose commonality is democracy and freedoms.” Among them are journalists, academicians, movie stars, singers, business people and religious leaders. While they may all mean well, their task will be a challenging one as they are by-and-large perceived by the opposition as people chosen to sell the AKP propaganda to the people. And it’s indeed troubling to sense in Ankara’s political circles that those preferring to distance themselves from AKP’s way of doing business are almost accused with treason as if there can be no third way or another way in resolving the country’s Kurdish issue. But it must also be clear to all that if there is going to be peace, it must be inclusive of everyone in the country — otherwise peace will mean an empty word.

That said, Nurettin Canikli, deputy chief of AKP's parliamentary group announced Wednesday, April 3, their intention to propose to the parliament the formation of a “investigation commission” that will observe the talks with the PKK and the Kurdish groups. It’s unclear how many members there will  be in this commission; how many will represent the opposition; what exactly their rules of engagement will be, or whether they will have any say on the process. Still, it’s nevertheless the first step by the government to include the parliament in the process, and the first step where they signal that they may start sharing information with the opposition party members about the content of these talks under the parliament’s roof.

The selected group of wise people will meet Erdogan on Thursday, April 4, in Istanbul, to mark the beginning of their new missions, and to be briefed on their tasks. They will be divided into seven regional groups. They will travel in their respective regions and explain to the people why AKP’s talks with the PKK leader Ocalan is the right way forward, and needs to be supported.