Who will Turkey target in Syria?

The Turkish parliament's recent authorization to allow troops to enter Syria has raised questions on whether Turkey will focus on Bashar al-Assad's regime instead of the Islamic State. 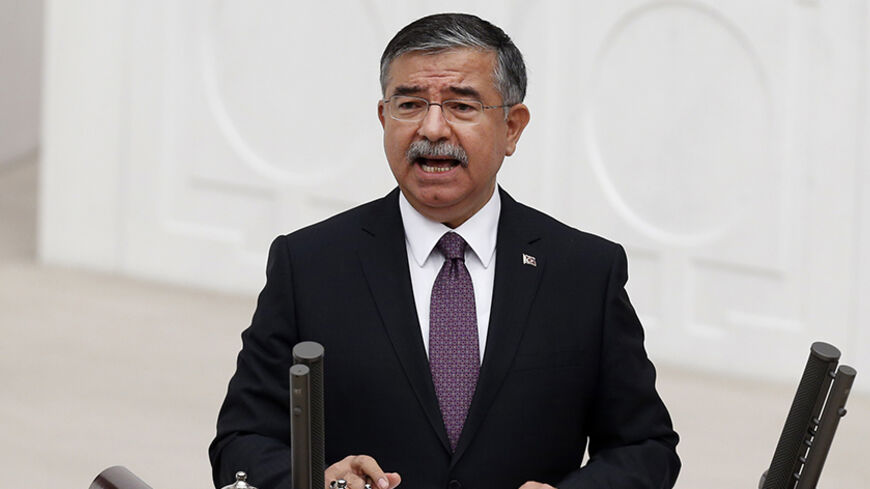 Turkish Defense Minister Ismet Yilmaz speaks during a debate on a motion to authorize military incursions against Islamic State fighters in Syria and Iraq, and allow coalition forces to use Turkish territory, in Ankara, Oct. 2, 2014. - REUTERS/Umit Bektas

On Oct. 2, the Turkish parliament authorized the government's deployment of ground forces to foreign countries and gave permission to foreign armed forces to deploy on Turkish soil. What next? Turkey’s Defense Minister Ismet Yilmaz said, “Don’t expect an imminent step after the approval of the authorization request.” It's more likely that the government intends this authorization to prove its unbreakable bond with the Western alliance and to serve as a deterrent to conflict, rather than an excuse to violate Syrian sovereignty.

Turkish Prime Minister Ahmet Davutoglu stated in the government’s parliamentary authorization request that Syrian President Bashar al-Assad remains the primary threat to the country’s national security. Yet, this is in direct contrast with the mission of the US-led coalition against the Islamic State (IS).

“The destruction caused by the Syrian regime’s attacks with heavy weaponry, including the ballistic missiles, are getting more serious. The Syrian regime’s aggressive policies targeting our country continues,” the Turkish authorization read. “The regime’s killing of more than 200,000 people with conventional weaponry also reveals the threat level it poses to our country.” Indeed, the central reasoning of this motion focuses on the Assad regime and how it threatens Turkey and regional stability.

However, retired Ambassador Faruk Logoglu, a member of the main opposition Republican People's Party (CHP), warned during the Oct. 2 parliamentary discussion: “If this motion is approved, Turkey will become this region’s pirate country. Please do see this.” Logoglu argued that since 2011 Turkey’s policies have interfered in Syria’s sovereignty and threatened its territorial integrity. He stressed that Turkey should prioritize the territorial integrity of Iraq and Syria in any step it takes. “I also urge the government to be good to our Kurdish brothers,” Logoglu said, expressing his support for Kurdish concerns, which the government invokes when discussing the fighting between the radical militants and Syrian Kurds.

Although the government’s motion cites UN Security Council Resolutions 2170 and 2178, neither resolution is directed at the Assad regime. Both resolutions call on the international community to respect Syria’s territorial integrity and take all steps to prevent foreign fighters from penetrating Syria to conduct terrorist activities.

Despite the Turkish government’s denial, the international community perceives both President Recep Tayyip Erdogan and Davutoglu as having turned the other way — at the very least — when these foreign fighters freely crossed the Turkish-Syria border, making an acute problem worse.

Hasan Unal, head of Atilim University's international relations department, told Al-Monitor that it's still unclear what the Turkish government hopes to achieve in the end. “This motion appears more as a pretext of opportunism to take possible action against the Assad regime,” he said. “Turkey should, however, focus on finding ways to establish some sort of a back channel with the Assad regime — not to mend ties, but to watch out for its best interest. Turkey should isolate both the Kurdistan Workers Party (PKK) and the IS threat. It should base all its policies on prioritizing the territorial integrity of Iraq and Syria. Eliminating the radical threat will also help the Syrian refugees safely go back to their country. The world will hopefully help take care of the rest. But this is a better path that averts a potential war scenario.”

The Tomb of Suleiman Shah, however, raises concerns that Turkey might be dragged into a war. The tomb, Turkey’s only territory outside its mainland, 40 kilometers (24 miles) inside Syria, is guarded by 50 members of Turkish Special Forces. Although the Turkish president denied any direct threat to the tomb, the territory around the tomb is controlled by IS militants. Moreover, Necdet Ozel, Turkish chief of general staff, released a special Eid al-Adha holiday message to the tomb's soldiers — the first such message since the eruption of Syrian civil strife three years ago. “You should not forget that you’re not alone there,” Gen. Ozel wrote Oct. 2. “Do not forget that you have the backing of our great nation with 76 million people. Our eyes, ears and hearts are all with you. With one news coming from you, you should all feel confident that our armed forces will instantly get there.”

Although NATO declared that the alliance would not leave Turkey out in the cold, its Sept. 5 Wales summit declaration (specifically, paragraphs 35-37) stated it would be ready to provide any assistance to the Iraqi government upon request. Yet the Iraqi government has not asked for such support — yet. In brief, no NATO or Security Council resolution legitimizes any military action in these countries.

Iraqi Prime Minister Haider al-Abadi said Sept. 25 that he sent his national security adviser, Faleh al-Fayyad, to meet with Assad days after US President Barack Obama announced he was prepared to expand the air campaign against IS to Syria. Abadi said the envoy conveyed the message to Assad that US airstrikes would not be directed against his regime or against Syria’s sovereignty and would only seek to hit the extremists in their safe havens. “We have been given that message by the Americans,” Abadi said.

In speaking to Al-Monitor, Turkish retired senior military officials — who asked to remain anonymous because of the sensitivity of the situation — acknowledged the challenges facing Turkey in the current situation, including that the country may appear as an occupying power in the absence of US approval for military action across the Syrian border. They also stressed the following: It does not matter how wrong Erdogan and Davutoglu's Syria policy has been — the point is, Turkey cannot allow IS-like terror organizations to take control of its border, since this only increases the chances of any potential clash.

Further, the officials said that Turkey cannot continue to sustain the growing number of Syrian refugees in Turkey. “Turkey needs to do something. Whether it gets the US support for it, Davutoglu is right today for demanding the safe zone in the Syrian theater,” an official said. “If they don’t do it today for various calculations, there is no escape from it. Turkey will go in and it will likely go as deep as taking control of Aleppo and Erbil for some time. This war is inevitable.”

Many in the Ankara beltway are sounding caution, yet there continues to be consideration as to the timing of such an action. Gen. John Allen, Obama's envoy to the global coalition against IS, is expected in Ankara next week. This could be the decisive point in shaping Turkey’s action plan for the coming days.