The approval of the motion for cross-border operations by the Turkish parliament raises more questions than it provides answers. 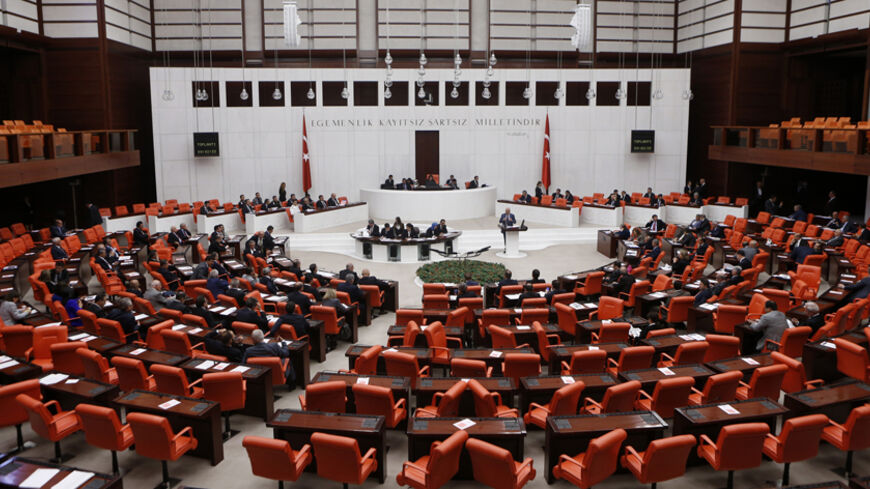 The Turkish parliament convenes to vote on a motion which would allow the government to authorize cross-border military incursions against Islamic State fighters in Syria and Iraq, and allow coalition forces to use Turkish territory, in Ankara, Oct. 2, 2014. - REUTERS/Umit Bektas

The motion that Turkish Prime Minister Ahmet Davutoglu described as “I personally wrote parts of it, and read in its entirety” was approved by the parliament. Because it is laden with equivocal expressions, the Turkish public and media are speculating the justification for the motion and its potential consequences. There is considerable criticism of issuing a single motion to authorize the Turkish army to cross the border into Syria and Iraq — not specifying what are the threats requiring such a motion, not listing the countries where the Turkish troops might be sent to (it simply says, "to send the Turkish Armed Forces (TSK) to foreign countries") and including an ambiguous expression that states, "To allow foreign soldiers to be stationed in Turkey for one year." But there is no doubt that the approval has endowed the government with ample space for maneuver.

Although Defense Minister Ismet Yilmaz said not to expect immediate steps to emphasize that there was no urgency, President Recep Tayyip Erdogan appears to be in a hurry "to impose a no-fly zone, set up safe havens on the Syrian side and decide on actors to manage this process."

Next week, the top two officials running the US campaign against the Islamic State (IS), John Allen, the special presidential envoy for the Global Coalition to Counter the Islamic State and Brett McGurk, deputy assistant secretary for Iraq and Iran, will be visiting Turkey.

Turkey, armed with generous parliamentary authority, is expected to bargain hard with its US partners. The Turkish side — which will demand a no-fly zone, raise the threat level of the increasing influence of the Kurdistan Workers Party (PKK) and People's Protection Units (YPG) in northern Syria and call for Syrian President Bashar al-Assad to be deposed — will have in its hands strong cards such as the Incirlik Air Base, sharing anti-IS intelligence and the role Turkey will play in the economic and political restructuring of Iraq and Syria.

But Turkish decision-makers will have to convince more than the Americans. While politicians see uncertainty as an opportunity, the military, which by nature sees uncertainty as a threat, is approaching with caution the Syrian campaign the government is preparing.

According to reports in Ankara's security quarters, the military has set clear red lines on certain issues. The senior military echelons criticized media reports such as those published in dailies Haberturk and Yeni Safak. Abdulkadir Selvi, who is seen as the most influential Justice and Development Party (AKP) mouthpiece in the media, wrote for Yeni Safak that the military favors unilaterally declaring a security zone without entering the coalition. Hence, It can be inferred that the military is not in favor of a Syria campaign without entering the coalition or ensuring NATO support.

The motion's line "situations deemed legitimate by international law" has caused confusion, as clearly Turkey does not want to be seen contravening international law. Security echelons in Turkey say that when setting out the goals of a Syrian campaign, what was deemed important was that it should be based on “legal justification and international legitimacy” instead of political considerations.

There is also the question of legal guarantees the military demands for any operation they may be involved in. The TSK insists that anyone who commits a crime while performing one's duties should be tried in a military court where military penal code applies, and that it should be the prime minister who authorizes the trials of military personnel.

The primary issue that will generate the least debate in terms of international law and has political-military consensus is the Tomb of Suleiman Shah in Syria, which is agreed to be sovereign Turkish territory and any armed attack against it will allow the right of self-defense.

The Turkish military insists that the political goals of any military operation must be clearly enunciated. The Turkish news media agrees the political goal of the parliamentary approval of the motion is to combat IS, topple the Assad regime, control the PKK and YPG and put an end to mass border migration. All these goals require different orders of battle, equipment and concepts. The military is not comfortable with this strategic confusion.

Questions are also posed about the ambiguous expression in the motion that reads "TSK elements." Are these military intelligence elements, combat forces, logistics units, the command-control structure or other elements we are not told about?

With an amendment to its legislation, the National Intelligence Organization (MIT) has been authorized to carry out operations in Turkey and abroad. The military wants to know whether the concept of "TSK elements" covers the elements and operations of MIT in other countries. Security sources point to serious concerns on how to harmonize the “military and intelligence operations."

Another unclear reference in the motion is the lack of the definition of "foreign military forces that will come to Turkey.” One instinctively thinks of military forces of countries such as the United States, but does it also include the soldiers of the Free Syrian Army? Nonstate military forces are very much in vogue and in Syria there are more than 30 armed organizations. Does this approval allow training of such nonstate armed groups in Turkey and permit them to base themselves in Turkey for operational purposes?

In sum, for Turkey's military the approval of the parliamentary motion has created more questions than it has answered. It is therefore not surprising that the negotiations between the political decision-makers in Ankara and our military command on how the Syria campaign will be conducted are still ongoing.

It is likely that the strategic picture that will emerge after the visit of Allen and McGurk will indicate the direction we are heading into. Given the military’s prudence in translating political directives to operational and tactical military orders, the bargaining is likely to continue for some time to come.