Turkish troops guarding the Tomb of Suleiman Shah, a Turkish enclave in Syria, are facing increased risks as Ankara refuses to evacuate them. 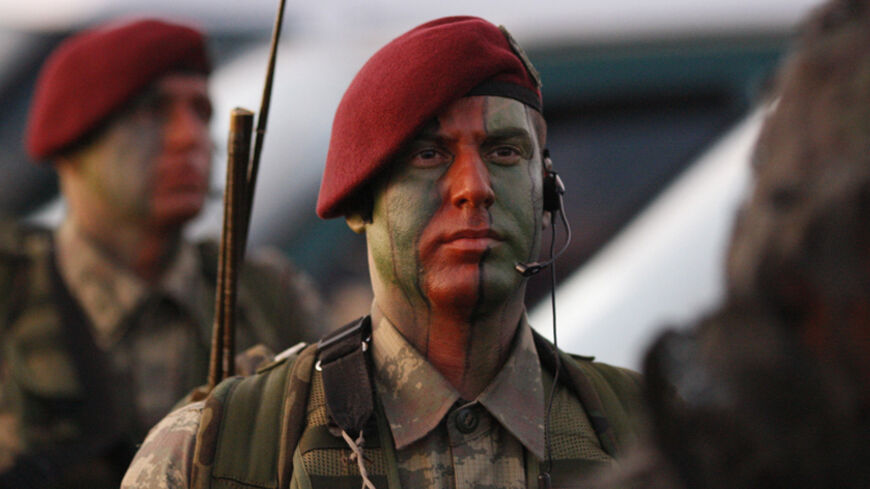 A correspondent in Turkey
September 30, 2014

At the moment, a critical debate is raging in Turkey about a Turkish Special Forces (TSF) detachment posted about 20 miles inside Syria to guard the Tomb of Suleiman Shah, an extraterritorial Turkish enclave. The debate has been fanned by the approaching parliamentary debate to authorize sending Turkish troops to Iraq and Syria.

Actually, the tomb has been on the agenda since March, when then-Foreign Minister Ahmet Davutoglu (now prime minister) referred to the escalating civil war in Syria and declared that Turkey wouldn’t hesitate to take any measure needed for the security of the tomb that was marked as Turkish territory by the 1921 Turkey-France border accord.

Turkey indeed took some measures. On March 14, relatively inexperienced Turkish conscripts guarding the tomb were entirely replaced by about 50 to 60 combat-proven elite troops of the Turkish Special Forces Command, all experienced in anti-terror operations. After that rotation of troops, Davutoglu said, “For the time being, there is no question of a transgression against our troops at the tomb. The tomb is considered Turkish territory. Should there be such a threat, we are ready with all necessary measures. Our public should have no worries. We have completed all our preparations for any eventuality.”

This TSF detachment has been serving at the tomb the past 6½ months. But the situation has radically changed in the last 10 days, after the release of Turkish hostages by the Islamic State (IS), the IS assault against Kobani and clashes that broke out between IS and the Kurdish People's Protection Units (YPG) forces in the vicinity of the tomb. Since the end of July, the Turkish detachment has lost contact with local elements that had been providing it with logistics and intelligence. TSF personnel have been guarding the tomb under extremely difficult, high-risk conditions with limited electricity, water and food supplies. The Turkish news media have woken up and begun to question the safety of these 50 to 60 Turkish fighters equipped with light weapons.

According to some media reports quoting a Washington Post report by Ishaan Tharoor, IS has laid siege to the tomb and even took hostage some Turkish Special Forces personnel. On Sept. 30, Yeni Safak, a pro-government daily, reported on its front page that IS has deployed more than 1,000 militants around the tomb and cut the possible evacuation routes. 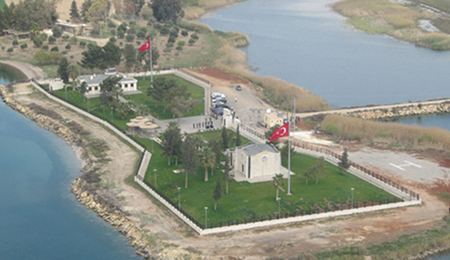 Although the chief of Turkey's General Staff quickly denied the report that Turkish soldiers had been taken hostage, the public and families of the military personnel at the tomb do not appear to be satisfied with the denials and have been asking why those Turkish soldiers have not been evacuated.

Security observers who have been following the developments in Syria closely have some interesting allegations. They say the General Staff has requested the government multiple times in the last four months to evacuate the tomb. But high-level decision-makers of the government denied such requests on grounds that “the tomb is a part of Turkish soil.” As a result, the tomb, which could have been evacuated as part of the hostage exchange, was totally ignored. Families of TSF personnel are said to have watched with bitter smiles the political show staged by government leaders with the freed Mosul hostages and their happy families.

Relevant security observers are seeking answers to these questions:

According to a security expert who knows the area intimately, Turkey has three options for the tomb. The first is to continue without any changes, the second is temporary evacuation of the guard detachment and the third is to reinforce the tomb unit with armored forces. The expert thinks the government is not in favor of evacuation or reinforcement. The Turkish government insisting on keeping 50 to 60 lightly armed troops despite increasing risks has no problem of capability. There must a strategic thought behind their decision.

What then is the reason for keeping those 50 to 60 soldiers facing such risks and not opting for evacuation or reinforcement?

Observers familiar with the issue claim that the TSF detachment was not evacuated during the bargaining for hostages on Sept. 19 and kept as a security deposit for IS, as Henri Barkey wrote last week.

But the security expert says that this is a shallow argument and that the issue is more profound. The Turkish government, by maintaining the TSF personnel at the tomb, is keeping the Turkish army in check while using the presence of the troops at the tomb to justify intervention in Syria. After the parliamentary debate this week to authorize the government to intervene in Syria, the Turkish government will certainly use the security of the tomb and the soldiers guarding it as a valid pretext for strategic moves such as creating a safety zone and "no-fly" zone in Syria.

It is also not far-fetched to say that the government, by saying “the Tomb of Suleiman Shah is part of Turkish soil,” is trying to capitalize on the growing sentiments of nationalism in the country and thus obtain the support of a majority of the population.

In short, the tomb is needed by the Turkish government to keep the army in check and to motivate it to enter Syria; to obtain support of the public after the parliamentary approval; and, finally, to better defend in the international arena its justification for intervening in Syria. The government has no intention of evacuating the tomb before the Syrian campaign expected in late October.

It is obvious that such a small number of Turkish troops, no matter how well they are trained, cannot resist IS indefinitely. The chief of General Staff and the TSF command are burning the midnight oil to persuade political decision-makers to decide on evacuation. But the political calculus of the government contradicts these efforts. The risk the government is taking, however, is a major one. If not properly managed and if calculations are not made correctly, the fate of 50 to 60 Turkish soldiers at the tomb can cast dark shadows on the “New Turkey” ideal of the Davutoglu government.