The Turkish army successfully evacuated its soldiers from the Tomb of Suleiman Shah in Syria in coordination with Kurdish forces on the ground. 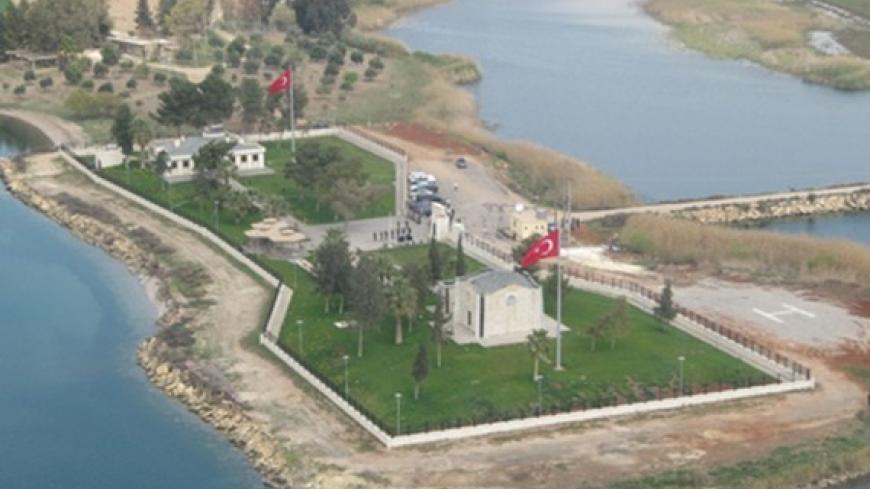 The saga of the Turkish army special forces detachment guarding the Tomb of Suleiman Shah in Syria ended in the early hours of Feb. 22, when the forces were evacuated by a Turkish army task force that entered Syria overnight.

Turkey woke up to the exciting news when Prime Minister Ahmet Davutoglu, accompanied by Chief of General Staff Gen. Necdet Ozel and Minister of Defense Ismet Yilmaz, announced the operation, saying that with increased clashes in the vicinity of the tomb and the growing threat of the Islamic State (IS), Turkey had to take measures recognized by international law.

Davutoglu said: “The evacuation operation started around 2100 [9 p.m.] last night [Feb. 21]. Our forces crossed the border from two directions. One force went to the Tomb of Suleiman Shah outpost [33 kilometers (20 miles) from the Turkish border] and the other force moved to the Eshme area in Syria to take control of a piece of land and hoisted our flag over it. All the preparations were conducted from the headquarters of the chief of staff with my participation. We entered Syria with 39 tanks, 57 armored vehicles and 572 personnel. Our unit reached the Suleiman Shah outpost at 0030. A religious ceremony was held for the graves there. Anything of spiritual value was removed and our last soldier left the outpost at 4:45 this morning. Our flag was removed from the tomb.”

Davutoglu noted that the tomb, which had been moved twice, in 1939 and 1975, will now be relocated to Eshme, which is now considered Turkish territory.

Eshme is about 200 meters (656 feet) from the Turkish border, opposite the Turkish town of Suruc. The area is under the control of the Kurdish Democratic Union Party (PYD), whose relations with Turkey have been spotty. It now appears that the security of the new territory will be jointly provided with Syrian Kurds. Davutoglu said, “We didn’t ask for permission of any country and we informed the coalition forces after the operations began.”

A senior security official who spoke to Al-Monitor on condition of anonymity said, “It was a correct decision, but politically belated. Only one noncommissioned officer was killed in an accident in what was a successful operation.” He added, "We knew in recent days there has been stepped-up IS provocations and harassment against the tomb. For example, in recent days there were cuts of power to the tomb. Then they issued threats to soldiers at the tomb to lower the Turkish flag. We knew they had moved very close to the tomb, which was kept under constant surveillance."

Another military official reminded Al-Monitor that in recent days, increased references in the news to the tomb and the Turkish soldiers stationed there had heightened Turkey's sensitivity to the subject, which no doubt became uncomfortable for civilian and military decision-makers.

The Turkish army task force that entered Syria moved inland via the Kurdish town of Kobani. Although there has been no official acknowledgement, reports said that Kurdish People's Protection Units (YPG) helped secure the routes used by the Turkish military.

According to Hasip Kaplan, deputy of the pro-Kurdish People's Democracy Party (HDP), it is very interesting that Turkish security forces, after fighting the Kurds for more than 30 years, participated for the first time in a joint military operation. Kaplan said, "This could well be a turning point that could show the role that the Kurdish Rojava canton can play in the security of the Turkish border."

Al-Monitor has learned that, in addition to the Turkish army guard detachment, three sarcophaguses containing the remnants of Suleiman Shah and his two guards and other historical artifacts were removed. The building was demolished so that IS could not use it as propaganda. The 10-acre piece of land in Eshme, where the tomb will be relocated, was bought from a Syrian Kurd. Rumors in Ankara suggested that PYD officials helped find this property and negotiate the purchase.

Turkey — already badly polarized — was divided on this operation. Many social media commenters praised the evacuation of Turkish soldiers and the transfer of the tomb to a safer location, yet other commenters described the evacuation as yet another manifestation of Turkey’s weakness in Syria. Some questioned, "How can Turkey, which needed such a major operation just to evacuate its own soldiers, play an effective role in Syria?" Of course, some were uncomfortable with the obvious coordination with the PYD, which, in their view, constituted a de facto recognition by the Turkish government and its security apparatus of the Kurdish moves to establish an autonomous administration in northern Syria.

Now that the tomb is abandoned, Turkey will likely have to deal with more pressure from the international coalition. Experts in Ankara say that this pressure will definitely come. It is well known that the United States has been seeking to use the Incirlik air base in operational missions.

Turkey’s relocation of the tomb and the evacuation of its guard detachment after 11 months of isolation are important developments for both regional dynamics and Turkish domestic politics.

Everyone will now seek answers to questions like: “Will this mean a prominent role for Turkey in the struggle against IS?” and “What does it signify about Turkey’s attitude toward the PYD?” — especially after Ankara invited Enver Muslim, the prime minister of the Kobani canton, to Ankara to be present during the operation, no doubt to prevent any coordination problems or misunderstandings between the Turkish army and the Kurdish YPG on the ground.

A tweet by PYDinfo in the late afternoon on Feb. 22, stating, “Suleyman Shah Tomb evacuation coordinated with YPG. The operation was planned with the Turkish military 4 days in advance, #twitterkurds” will certainly ignite serious debate in Turkey.