Turkey's ruling Justice and Development Party framed its cross-border mission to evacuate the Tomb of Suleiman Shah as a victory for the nation, but political opposition and social media commenters saw much to mock about the operation. 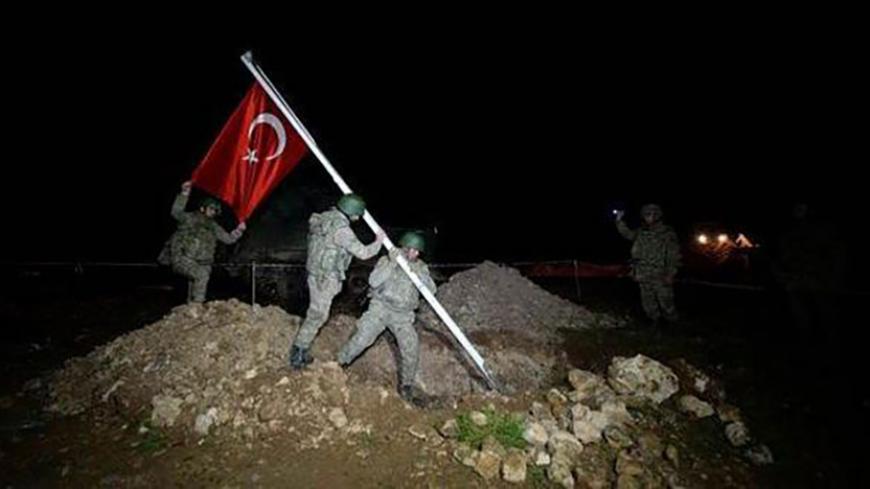 Turkish soldiers raise the flag at the new location of the Tomb of Suleiman Shah after its relocation, Feb. 23, 2015. - Handout

Public relations photos distributed to the press Feb. 22 overshadowed the realities of Turkey’s cross-border military operation. An image showed soldiers hoisting the Turkish flag exactly in the same manner and style as that unforgettable picture at Iwo Jima.

Another photo depicted Prime Minister Ahmet Davutoglu at the center of a table, flanked by the chief of staff and minister of defense, pointing at a map of Syria while watching an ongoing operation. The picture, taken at an underground operations center in the chief of staff headquarters in Ankara, was reminiscent of images of President Barack Obama in the White House operations room watching the Navy Seal operation that ended with the killing of Osama bin Laden.

Viewing such images, Turks — who have the reputation of living in a martial-spirited nation — woke up the morning of Feb. 22 with another victory achieved by their mighty and indomitable armed forces, as repeatedly boasted by authorities. It was learned that the Turkish army triumphantly completed a daunting military operation deep in Islamic State-controlled Syrian territory, returning home to Turkey with only one fatality — the result of an accident.

Turkey’s Foreign Minister Mevlut Cavusoglu lauded the military operation by proudly stating: “Nobody should mess with the Turkish Armed Forces.”

A task force of around 700 military personnel and 39 tanks penetrated Syrian territory in darkness Feb. 21, moving about 33 kilometers (20 miles) southward to evacuate 38 Turkish soldiers who had been trapped at the Tomb of Suleiman Shah for eight months. The 38 Turkish soldiers brought the alleged “sacred remains” of Suleiman Shah — the grandfather of the founder of the Ottoman Empire — to the safety of the homeland. The tomb was blown up in the operation in the early hours of Feb. 22.

Those soldiers were undertaking a guard mission at the tomb, which sat on a piece of land as big as a soccer field, about 8,797 square meters (94,690 square feet). This territory belongs to Turkey, according to the Franco-Turkish Treaty of 1921, which delineated the frontier between Syria and Turkey. It is the only piece of land outside Turkey that is considered the sovereign territory of the Republic of Turkey, and therefore it is a sacred part of the motherland.

Yet, it is not an established fact that the tomb indeed belongs to Suleiman Shah, who lost his life in the 13th century while crossing the Euphrates River. The Ottomans needed a legend, so the tomb, which the locals called the “Turkish tomb,” was designated as that of the grandfather of the founder of the state. Despite the lack of substantiation, the tomb was inherited by the Republic of Turkey, which was formed in the heartland of the defunct Ottoman Empire.

For the secular founders of Turkey who repudiated the Ottoman legacy, the tomb possessed no religious sanctity or political significance, even if it belonged to Suleiman Shah. If there is anything sacred about the tomb, it is the territory that it stands on, since that piece of land is part of the motherland, as sanctioned by international treaties.

Therefore, while the Turkish military operation has guaranteed the well-being of the Turkish soldiers whose lives were threatened by the Islamic State (IS), it also meant the evacuation of a Turkish territory — although, the statements underlined that the evacuation is temporary. When Syria returns to normalcy and stability — if that day ever comes — the remains are to be returned, meaning the blown-up tomb would be resurrected.

The flag-hoisting operation was connected with the preparation of the temporary venue for the remains of Suleiman Shah. About 200 yards from the Turkish border, a field within Syria will host the temporary tomb. The Turkish flag is raised just a few meters away from the red-starred flag of the Kurdish People's Protection Units (YPG), which expelled IS from Kobani and its environs.

The Turkish armored column passed through Kobani on its way to the tomb, and raised its flag a few kilometers east of Kobani, in an area controlled by the YPG, which supports the Kurdistan Workers Party.

The entire operation raised eyebrows, raising questions as to whether Turkey cooperated with the YPG in the rescue operation. Davutoglu ruled out any cooperation with anyone.

But the YPG did not miss the opportunity to claim that the operation was conducted with its cooperation. On Feb. 22, following Davutoglu’s remarks, the group stated that the planning of the operation was finalized after a four-day discussion between Turkish authorities and officials appointed by the YPG Kobani Command.

The statement continued: "In this context, armored vehicles and a certain number of soldiers affiliated with the Turkish army crossed into Kobani canton through the Mursitpinar border crossing at 21.00 yesterday evening. Advancing in the company of YPG vehicles, the Turkish military reached the Suleiman Shah tomb following a route that had been previously determined. Our forces have precisely fulfilled their duty of responsibility for the deployment and reinforcement of Turkish soldiers in the areas controlled by our forces."

The confusion on the nature and scope of the Turkish operation was not only confined to whether there had been cooperation with the Kurds. The whole operation triggered a wave of indignation in the opposition. The operation is interpreted as surrendering Turkey’s territory — a shameful retreat disguised as a military victory and humanitarian mission.

The leader of the main opposition Republican People's Party (CHP), Kemal Kilicdaroglu, described the military operation as “the government bending in front of terrorists” (alluding to IS) and “selling out the territory of the motherland.” He said, “Such a shame is too much for Turkey. Destroying its own sentry post, withdrawing its own soldiers and deserting its own territory and presenting this as a success is proof of a done deal. Those who gave the instructions of deserting Suleiman Shah will flee from this country, as well.”

The chairman of the Nationalist Action Party, Devlet Bahceli, expressed his indignation in a strongly worded statement. He accused the Justice and Development Party (AKP) government of cowardice and of cutting Turkey's aorta by fleeing from its own territory.

He was not impressed by the flag raising. On the contrary, he interpreted the whole operation as lowering the flag in every corner of “our homeland,” as “surrendering every segment of our land to the terrorists and the traitors.” He added, “In Turkish history there has never seen such sleaziness, such ingratitude and such defeatism.”

The secular opposition daily Taraf characterized the operation as “the greatest military defeat of the republican history,” accusing the government of surrendering centuries-old Turkish territory. Taraf accused the government of “losing [Turkish land] for the first time ever.” On Aug. 21, 2014, Taraf headlines claimed that Suleiman Shah would be delivered to IS as part of a deal to liberate the 49 hostages taken by IS at the Turkish Consulate in Mosul.

Therefore, the removal of the tomb from a place considered to be Turkish territory fueled speculation of a secret deal between the AKP government and IS.

Not every reaction concerning the operation was either pro-government or strongly against it. Social media users mocked the ostensible military prowess of the operation.

The popular online humor site Zaytung made fun of the operation, addressing the military, “Thanks to the Turkish army for evacuating the tomb before our MIT [intelligence service] bombed it.”

Perhaps the most sarcastic comment of all was a cartoon of cargo van with an inscription reading “AK Transport” (AK being the initials of the ruling party), with advertising copy that reads, “All tombs transported with care.”

The Turkish military operation is being treated as a matter of indignation or military farce rather than the stunning military success that the government had hoped it would be. Whatever the case, Turkey’s terms of engagement with Syria have been totally altered by this military operation, officially named “Shah-Euphrates.”