The Abu Basil family, deported from Turkey, became best of friends with Turkish soldiers guarding the Tomb of Suleiman Shah. 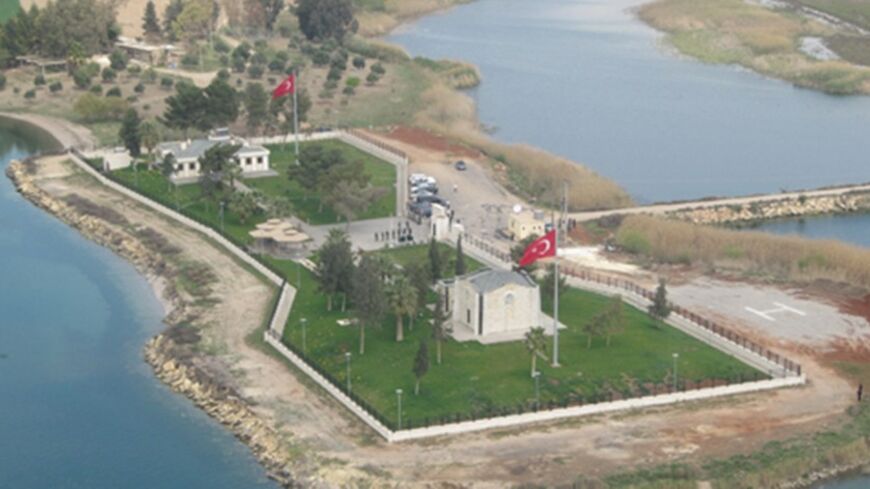 “When I was a child, Turkish soldiers guarding the Tomb of Suleiman Shah in the foothills of Jabel Fortress used to carry their water from the Euphrates River on donkey back to their base. They were putting the water in tin cans without lids. We used to throw pebbles at the donkeys. Startled, they jumped about and spilled their water and we laughed. The soldiers did not react too much. One day when we were throwing pebbles with three of my cousins, my father caught us. I was punished by two days' confinement to the house.”

This is a flashback of Saad Abdunnur abu Basil’s childhood around the Tomb of Suleiman Shah, the only sovereign Turkish territory inside Syria. The tomb, put under Turkish custody as stipulated by the 1921 Treaty of Ankara with the French, is on the agenda as a potential pretext for Turkey to mount a cross-border operation into Syria. The case of the video recording of a threat by the Islamic State of Iraq and al-Sham [ISIS] was circulated on the Internet. The Internet message said: “We are giving you three days [to evacuate] the soldiers in this tomb which is on the Islamic land of Aleppo. Or, we will raze the tomb.”

Three days passed and there was no attack, but Turkey remained focused on that threat. There was much speculation that the AKP government would use the threat as an excuse to enter Syria and as a distraction from the corruption allegations it faces.

Fine, but what does the story of Abu Basil have to do with the current crisis? Simple: Even in the most turbulent times between Turkey and Syria, the tomb had never become a topic of discord and conflict. Even those “undesirable” people deported or who had escaped from Turkey were at peace with the tomb that represented the Turkish state and flew the Turkish flag. In the tomb, guarded by Turkish soldiers since 1938, there are the graves of Suleiman Shah, the grandfather of Osman Ghazi, the founder of the Ottoman Empire and his two bodyguards. In 1973, because the tomb and the soldiers’ quarters were to be flooded by the new Assad Dam Reservoir, they were relocated to the nearby village of Karakozak in Aleppo province.

‘You have to love the land you live on’

Abu Basil is a member of a Syriac family deported from Mardin to Syria during the 1915 events. Abu Basil told Al-Monitor that the Basil family started a new life in Syria and actually developed the land around the tomb in such a way as to be labeled the “cotton kings.” The Basil family never turned their backs on Turkey. The Christians in the area were never hostile to Turkish soldiers despite their bitter history. The same was also true for Arabs. “I was so distressed when I heard the threat to raze the tomb. Let this turmoil and civil war end, everything will go back to what it was. The people of the region can do it," Abu Basil said.

Here are a few flashbacks from Abu Basil’s saga:

“My grandfather Selim Abdunnur, my father, Basil Abdunnur Abu Salim, my uncle Moris and total of 80 families first came to Karamaniye after their deportation from Mardin, and then they settled in Derbesiye. These 80 families, along with 10 Kurdish families, were the pioneers of Derbesiye. My grandfather became its first mayor. Later the families dispersed to Qamishli, Raqqa and Aleppo. My father and uncle set up partnerships with Arab tribes and expanded their land holdings by buying or renting from them. They imported modern tractors and agricultural machinery from abroad. They started a center to improve seeds. They were cultivating 6,000 acres of land near Jaber Fortress. My father’s biggest Arab partner was Hamri from the Shama tribe. My father became the cotton king.

"In 1966, he received awards with George Aro. When the Baath regime began imposed nationalization, they first took his factories and then his land. They even nationalized his produce. The pressure increased and because we had preserved our Turkish nationality we were forced to return to Turkey. On June 13, 1978, when our train from Aleppo arrived at Istanbul’s Haydarpasa Station after we had left all our property behind, we had nothing but eight suitcases. That was our last use of the Orient Express.

"That train was a legend for us. It was my family's luxury entertainment. Its restaurant was top-notch. My father knew its schedule by heart. He used to arrange his trips to taste Istanbul cuisine on the train, especially during the turbot season. He got on board the train when it entered Syria. The train used to go into Syria, then back to Turkey, and then back to Syria. My father and his friends enjoyed the restaurant for four hours until their last stop, He sent cars in advance to meet them there and bring them back home. After we settled in Istanbul and until he died in 1986, he was going to Antakya frequently to relive his old days and smell the soil of Syria. He could not cross the border because of the Baath.

"He never said anything against Turkey when we were in Syria. He always told us, "if you don't love the land you live on, then you must leave.” They never had any enmity toward Turkish soldiers who used to carry water from the river two three times a week on donkey back. Children used to go with the soldiers to the tomb and enter their outpost. After we left Syria, the tomb was flooded. With an agreement they made, Hafez al-Assad gave them a piece of land nearby and this impressive tomb was built there.”

In our conversation, Abu Basil said at least 10 times that there was no hostility toward Turkey over the tomb. Then, how did all of a sudden the tomb became an element of threat and a pretext for Turkey to think of a military operation against Syria? The idea that could drag Turkey into the Syrian morass came from Prime Minister Recep Tayyip Erdogan on Aug. 5, 2012, when he said: “We have the Suleiman Shah Tomb there. That tomb and the land around [it] is Turkish territory. We cannot remain idle to anything wrong happening there, because that would be an attack against our land. It will also be an attack against NATO territory. All know their duty. They will do whatever is needed and are already doing it.”

The opposition fighters, of course, got the hint: “If you expand your clashes toward Suleiman Shah Tomb, then the Turkish army will enter Syria.” Many people were already asking if the opposition would make a move to drag Turkey into the mess. Naturally, the reasoning and objective of the ISIS to oppose the tomb could be different. Since 2012, the positions of opposition groups to Turkey have been vacillating with developments. According to statements of European militants who clashed with Turkish security at Nigde, ISIS is upset with Turkey now because of its support of ISIS foes the Islamic Front and the Free Syrian Army.

Placing Turkish armed forces on alert shows that ISIS threats are taken seriously. According to a report in daily Milliyet, the Turkish military has prepared three different plans. The first reaction would be to send the air force to attack predetermined targets, an operation scheduled to take 5.5 minutes. If that did not do the trick, then the special forces waiting on the border would be flown in with Sikorsky helicopters. The final phase, if necessary, would be a massive intervention with assault helicopters.

These are preparations that arouse nationalist and conservative quarters. That is why there are concerns that the AKP might be hoping to reconsolidate its unraveling conservative and nationalist base by exaggerating the threats and talking of limited operations against Syria.