300 days at the Tomb of Suleiman Shah

Speaking with Al-Monitor, Turkish special forces officers share their experiences, observations and insights into Islamic State activities near the Tomb of Suleiman Shah and the origins of the Turkish government's decision to evacuate its soldiers. 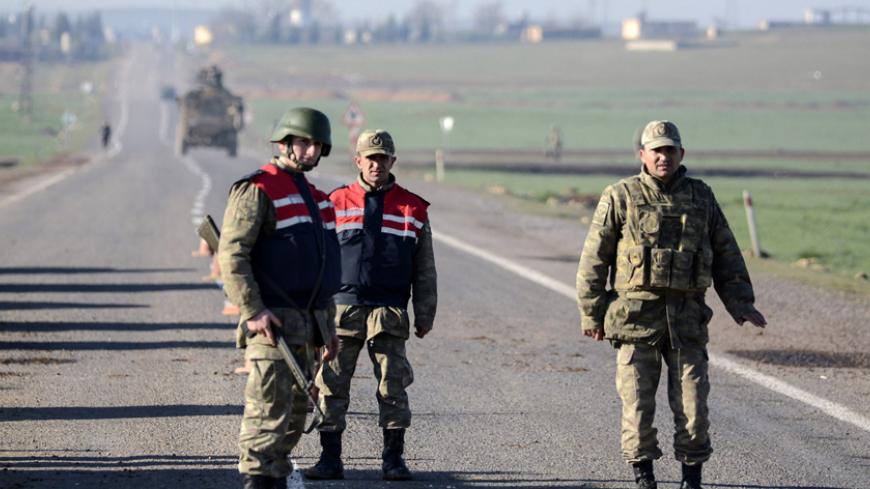 Turkish army soldiers take position on the road to the Mursitpinar crossing gate near the Syrian border on Feb. 22, 2015, in Suruc, Sanliurfa province, during an operation to relieve the garrison guarding the Tomb of Suleiman Shah in northern Syria. - ILYAS AKENGIN/AFP/Getty Images

The evacuation of 38 Turkish soldiers from the Tomb of Suleiman Shah in Syria, without hostilities, ended a 300-day saga that had occupied the agendas of Turkey and the region. In Turkey, where every issue leads to political polarization, it was inevitable that the evacuation would end up at the center of a debate between the ruling Justice and Development Party (AKP) and the opposition. Amid all the turbulence, there was hardly any mention of the lives and travails of the elite Turkish soldiers who served at the tomb under considerable risk and hardship for almost a year, and the ordeal and worry faced by their families back home. Moreover, no one has sufficiently explained why the tomb was evacuated and abandoned. The experiences shared by some of the special forces officers who served at the tomb for 300 days are, however, enlightening in this regard and others.

Turkish officers reported to Al-Monitor a low-level Islamic State (IS) presence in the area of the tomb during the first four months of their posting, beginning at the end of April 2014. By August, IS forces had become more visible and effective. During the first few months of the Turk's deployment, IS members came to the tomb a number of times, trying to make contact. The IS militants had positive attitudes and actually helped resolve power outages at the tomb. With the initiation of the coalition air attacks in September 2014, however, a better-trained IS unit consisting mostly of Egyptians and Yemenis arrived. By the end of September, IS threats against the tomb had replaced the earlier positivity and moderation.

During October-November, related the Turkish officers, IS militants came to the tomb a few more times, but, on these occasions, they demanded that the Turkish flag be lowered and the caliphate flag be raised. Also around this time, power outages increased, and IS fighters moved into a hut some 300 meters (0.2 miles) from the tomb to keep it under surveillance. Militants occasionally ventured over to the tomb entrance to verbally abuse the Turks. Some of them warned that they had dug a tunnel under the tomb, so they could blow it up any time they wanted.

What led to the change in IS' attitude? Apparently, after the Sept. 20 release of hostages held by IS at the Turkish Consulate in Mosul, IS fighters on the Raqqa-Akcakale road were attacked by aircraft from the US-led international coalition. There was speculation that the IS elements were responsible for security along the road as part of the hostage release. This episode, it is now understood, drastically altered IS' attitude toward the tomb, because the organization believed that Turkey had given the coalition the coordinates of the IS targets. Hence, threats and harassment at the tomb increased. The officers were aware that the coalition air attacks had impeded IS but had not eliminated its threat.

Contrary to popular perceptions of IS, the officers told Al-Monitor that the most defining characteristic about its members was not how easily they could kill, but how willingly they died. According to Turkish personnel who observed IS fighters from a short distance, the supreme goal was to attain martyrdom, sooner rather than later. The IS fighters' motto, they suggested, was, “The Sunni world wants our blood. We should die so it can continue to live.”

These professional officers attributed IS' strategic superiority to three major factors: sustaining the pace of combat no matter the cost, moving quickly and providing excellent logistical support. In conversations with Al-Monitor, one Turkish officer observed, “Despite heavy air attacks, they were serving two hot meals a day. All their fighters had bottled water, and they had good medical care.”

The officers said November-December was especially tough for them because of intensified threats and harassment by IS. In November, the possibility of rotating the guard detachment was discussed, but the impossibility of coordinating with local groups on the ground in Syria ruled it out. One officer told Al-Monitor, “When the idea didn’t pan out, psychological warfare developed between us and IS.” Another officer added, “We had brief chats with our families every few days by cellular phone. So as not to worry them, we didn’t tell them that the risks at the tomb were getting worse and that there was no date set for our return.’

In February 2015, two important developments added to the concerns of decision-makers in the Turkish military. The first was IS using the area around the tomb to take cover from coalition air attacks, which also meant stepped-up IS movements in general around the tomb. The second was the southward shift, toward the tomb, in the battle for Kobani between Syrian Kurds and IS. These two events prompted the high command to notify the political leadership of their assessment: “This is it. We can no longer guard the tomb.”

According to the usually well plugged-in writer Abdulkadir Selvi of the pro-government daily Yeni Safak, the anti-IS operations in Iraq that were expected to expand to Mosul also influenced Ankara’s decision to evacuate the tomb. A security expert in Ankara who requested anonymity said that until this January, Ankara was still thinking in terms of rotating the guard detachment, but when they got the message from the military command that the tomb could not be secured, they decided to evacuate.

The same expert said the harmonious relationship between the chief of the General Staff, Necdet Ozel, and Prime Minister Ahmet Davutoglu played a key role in the decision, as did the brutal murder of a Jordanian pilot captured by IS. He said, “Imagine Turkish soldiers in orange-colored prisoner overalls photographed [burning to death] in cages. Neither the Turkish military nor the Turkish people could live with that trauma.”​

It is conceivable that the military command's message to the politicians meant that they intended to evacuate their soldiers without reliance on local forces. According to Al-Monitor columnist Kadri Gursel, the “belated but correct decision” to evacuate was also linked to upcoming general elections in Turkey. According to Gursel, it did not make sense to continue guarding the tomb if it possibly entailed “major political and military costs, including war.”

Was the evacuation operation a “victory” that exhibited Turkish military prowess to the Middle East and the world, as boasted by pro-AKP media, or “a frightened escape under IS pressure,” as charged by the opposition? The answer is not yet clear, but there is objective criteria to keep an eye on. One is the treatment of the Turkish special forces soldiers deployed at the tomb. Will they receive honors for serving under extreme risk and tough conditions or will their sacrifices be ignored? Will the soldiers continue to serve in their original units or will they be reassigned to nonspecial forces divisions? Only when there are answers to these questions will it be clear whether the Turkish military command considers the Suleiman Shah saga a story​ of success or a fiasco.