Are Turkish troops guardians or accidental hostages at Syrian tomb?

Delayed rotation of Turkish troops guarding the Tomb of Suleiman Shah in Syria is causing frustration. 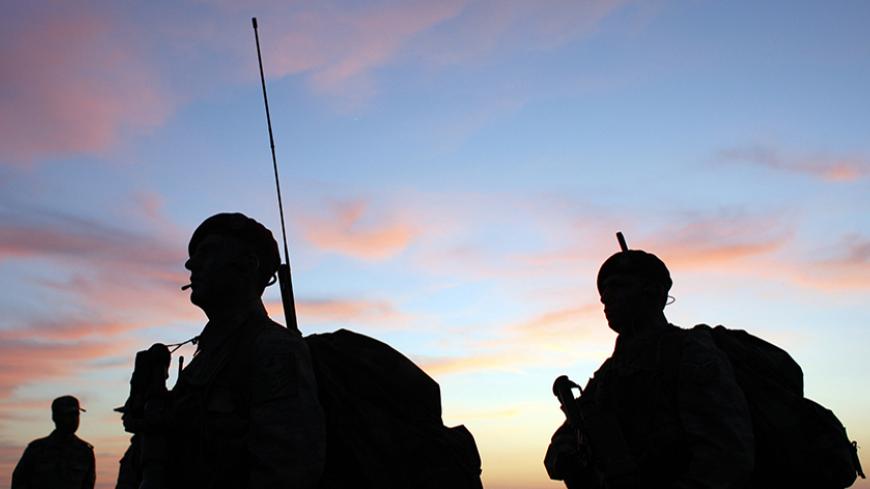 It has been four months since Al-Monitor published the article “Are Turkish troops trapped at Syrian tomb?” We have been seeing frequent news reports that Iraqi Kurdish peshmerga forces fighting at Kobani are rotated every two months. But interestingly, we don't see any reports on the rotation of the Turkish troops guarding the Tomb of Suleiman Shah, which is considered to be sovereign Turkish territory in Syria. The same soldiers who were deployed at the tomb at the end of April 2014 are still guarding it 11 months later.

The question is how come these elite troops of the Turkish Special Forces have not been rotated after 11 months, despite their service under highly stressful, rough and uncertain conditions. The first explanation one hears plays to the pride of Turkish nationalists and generals. After all, they feel these soldiers are so well trained and used to serving under difficult conditions that there is no need to rotate them. A retired special forces colonel who spoke to Al-Monitor on condition of anonymity said, “These are tough guys, very experienced and disciplined. They can survive in any challenging environment. They have been trained for these harsh physical and mental conditions.”

But what about the families they left behind? Although Turkish generals tell their wives, “Your misfortune is to be married to the best,” such flattery no longer impresses relatives. Journalist Metehan Demir in a recent report quoting the families of soldiers serving at the tomb wrote: “Normally soldiers guarding the Tomb of Suleiman Shah are rotated every two to three months. Now they have not been rotated for 11 months. Is this a decision by Turkey or is it because the IS [Islamic State] is not allowing it?”

Demir says there are families who claim they have been seriously affected. Sources close to the soldiers’ families speaking to Al-Monitor also emphasize growing concerns of the relatives, especially after the recent killing of two Japanese hostages and the Jordanian pilot. The same sources say soldiers were told they would be rotated after three months. There were in fact attempts to rotate the elite troops in September and November 2014, but this appeared to be impossible because of the conditions in Syria. In other words, Turkey had tried to rotate its troops stationed at the tomb but did not succeed, which of course was a massive disappointment for the soldiers and their families.

Professor Clark McCauley of Bryn Mawr College in Pennsylvania, a prominent scholar on small-group socio-psychological dynamics, told Al-Monitor, “If patriotic soldiers feel themselves sons of their fatherland, then special forces soldiers feel themselves favored sons. As they are first in sweat and sacrifice, special forces expect to be first in status and support. The families of special forces men often feel a share in this special status. The special forces men who feel abandoned to their fate feel surprise, anxiety and even shame: 'What could we have done to deserve this treatment from our country?' To the extent that they cannot see a failing of their own, they begin to see betrayal and begin to feel anger. Their families feel mounting fear for their fate, and begin to share growing anger about their betrayal. Neither the men nor their families can afford to express anger while the danger lasts, but when the danger ends — for good or ill — the anger will emerge. A wedge will have been driven into the ties between commanders, government and country on the one hand, and the men and their families on the other.”

McCauley added, “If even favored sons are betrayed, who can be safe? This kind of wedge can have political and military consequences in years to come.”

Unfortunately, the Turkish public does not think in the humanitarian terms expressed by McCauley. Turks have strong nationalist instincts. By studying the news and comments in the Turkish media, one easily notices that the issue is approached from a nationalist angle. The majority of the public is against evacuating the Tomb of Suleiman Shah because of this prevalent nationalist sentiment. Could the tomb then be relocated? One view is that as it has been relocated twice before, it could now be relocated to the border and thus ensure the security of the troops. But given the scope of such a project and the time it will take, a proposal such as this does not appear to be feasible.

“These soldiers are volunteers, professional troops. They know the risks they take. When they went to the tomb they knew that they might die protecting it,” the retired special forces colonel added,

When Al-Monitor reminded the colonel that the Turkish government allowed IS to take over its consulate in Mosul without resistance in June, he said, ”There is no comparison. The soldiers I'm talking about aren’t diplomats.”

Earlier there were reports that Turkey’s high command had proposed the evacuation of the tomb but that the government had refused this.

What motivated the government to reject this proposal? The answers vary. One theory is that the government that has adopted an ever-increasing nationalist narrative did not want to be seen abandoning the tomb, and it relies on the US assurances under Article 5 of the NATO Charter that stipulates joint defense of a member state that is attacked. A security expert told Al-Monitor on condition of anonymity, “Whatever the government's reason is for not evacuating the tomb, political decision-makers and Turkish generals are too late in rotating the troops. At the moment, rotation by air is extremely risky because of the Syrian air defense and MANPADS in the hands of the opposition groups. A rotation by land is practically impossible because of the chaotic situation along the various routes. These concerns indicate that the soldiers at the tomb are likely to stay there for some more time."

How long should soldiers be expected to serve under these uncertain and risky circumstances without impairing their physical and mental health? The Turkish army does not have a rule addressing this issue. But according to US Army Manual FM-4.2.51, Combat and Operational Stress Control, "The feeling of waiting in vain is much more stressful than taking part in an operation in a theater with extreme uncertain and unpredictable conditions." The manual states further that under such operational conditions, soldiers best serve four months. “But these are standards for US soldiers. Ours are Turkish special forces,” the retired colonel said with a smile.

Thus, the return date of troops serving at the tomb is unknown. It is this uncertainly that takes a toll on the troops, in addition to their being apart from their families. Any soldier with field experience knows that, sometimes, waiting passively because of uncertain conditions for months is more difficult than engaging in combat.