Turkey’s evacuation of the Tomb of Suleiman Shah in Syria was meant to remove the risk of an Islamic State attack that would have cost the government dearly in upcoming general elections. 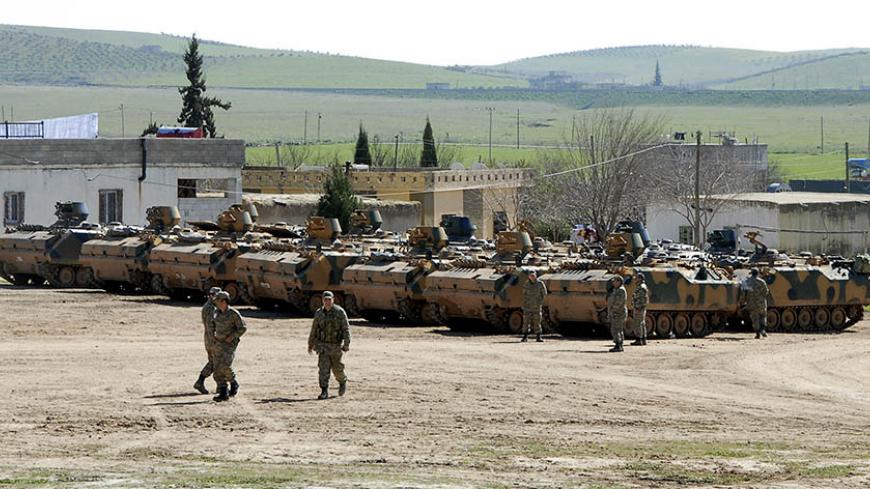 Turkish military armored vehicles, which took part in an operation inside Syria, are pictured near the Mursitpinar border crossing in the southeastern town of Suruc, Sanliurfa province, Feb. 23, 2015. - REUTERS

On the night of Feb. 21, Turkey evacuated the Tomb of Suleiman Shah in Syria, its only territory outside the mainland, and 38 soldiers guarding the shrine.

The memorial site — an area of about 10,000 square meters (108,000 square feet) that Turkey acquired through international agreements near Karakozak village in Aleppo province, 33 kilometers (20.5 miles) from the border — had been under Islamic State (IS) threat for more than a year.

After taking control of the region, IS made its first threat to Turkey about a year ago, urging the evacuation of the site. The challenge caused serious distress in Ankara. A military operation to remove the IS threat around the site was put on the table as a possible course of action.

In March 2014, a secretly recorded conversation between four senior officials, representing the government, the security, the intelligence and Foreign Ministry establishments, was leaked on the Internet just a few days before the March 30 local elections.

A judicial ban on media coverage of the illegal tape prevents us from discussing its details here. Yet, the controversy over the leak has produced indications that the government entertained an idea of using a military operation against IS to protect the tomb as an opportunity for electoral gains. Eventually, the Justice and Development Party (AKP) government made no military move against IS ahead of the polls as a means of boosting its electoral standing. But it did not evacuate the site either.

Today, Turkey is on the eve of another election — the June 7 parliamentary polls. Metin Gurcan’s Feb. 22 article for Al-Monitor reveals that the IS threat to the tomb and the military personnel guarding the site expedited the evacuation move. We can safely assume that launching a military operation with a view of scoring electoral gains did not even cross the government’s mind this time. Ankara is seen to have acted with a security rationale.

The timing of the evacuation tells a lot. The operation was a rational move to fully remove the risk of Turkey falling hostage to IS once again ahead of elections.

The coming elections are of historic significance for Turkey. President Recep Tayyip Erdogan, bent on introducing a “Turkish-style” authoritarian presidential system, cannot tolerate any electoral losses. The Turkish troops guarding the tomb might have faced no attack ahead of the elections, but they had already become potential IS hostages, with no chance to defend the site against the group.

IS attacking the tomb and killing the soldiers or taking the soldiers hostage before killing them with one of its gruesome methods would have allowed the most inept of oppositions to make the AKP pay a heavy price at the ballot box. The presence of 38 elite soldiers at the tomb had offered IS an opportunity to blackmail Ankara and keep it under pressure in a highly sensitive pre-election period.

In an Oct. 7 speech to Syrian refugees at a camp in Islahiye near the border, Erdogan had warned, “No one should doubt that we’ll respond immediately to any threat to the Suleiman Shah Memorial Outpost, which is a Turkish territory inside Syria.” Yet, those who closely followed the situation at the site were aware that any threat would have taken an irreparable humanitarian toll before the Turkish military could respond.

The decision-makers in Ankara must have seen that the cost of taking deterrent military measures around the tomb to dispel the risk of an IS attack would be too great to justify the purpose. They are likely to have concluded that defending the tomb against IS would be impossible and unnecessary.

Defending a 10,000-square-meter Turkish territory on considerations beyond any valid security concept would have dragged Turkey to the point of a direct war with IS. And we already know that Ankara has never intended to fight IS. If the AKP government had had such an intention, it would have joined the international military and political coalition after the fall of Mosul and opened its air bases to the use of Western allies. Ankara today is not a member of the anti-IS coalition, but rather a reluctant subcontractor.

In sum, the rationale of avoiding a fight with IS led Ankara to opt for abandoning the tiny territory to the group instead of taking great political and military risks to defend it, including a war.

Ankara was already late in evacuating the tomb. The move could not be delayed further amid looming elections and mounting risks.

A major factor that heightened the security risk for Turkey and therefore for the tomb was the Feb. 19 agreement that Turkish and US officials signed in Ankara to “train and equip” the “moderate” Syrian elements supposed to fight IS in the future.

Turkey wants and expects those elements to fight also Bashar al-Assad’s regime, while the United States prioritizes the struggle against IS. Despite the AKP government’s diverging approach, the pressure on Ankara led it to sign the agreement. This, however, doesn’t keep Turkey from facing a bigger risk as a potential target of IS terror.

The AKP government’s misconceived and mismanaged Syria policy has placed Turkish borders and cities under the threat of jihadist terrorism. The government can’t change overnight this policy, which involved support for jihadists to topple the regime in Damascus, and therefore it can’t close this huge security gap either. Hence, the AKP government can only strive for damage control in the disaster its Syria policy has become. The evacuation of the tomb should be seen in this context, too.

Additionally, the evacuation was equally necessary if Ankara is to employ security measures to curb IS recruitment in Turkey and dismantle IS cells reportedly formed in Turkish cities.

The fact that the evacuation was conducted via Kobani, controlled by the Democratic Union Party (PYD), the Syrian offshoot of the Kurdistan Workers Party, should be perhaps noted as history’s joke to the AKP government, which has led a proxy war against the Kurdish cantons in Syria since 2012, by using the jihadists.

IS had launched an offensive on Kobani immediately after releasing the hostages from Turkey’s Mosul consulate Sept. 20. Turkey’s Kurdish movement and its grassroots accused Ankara of staying idle in the face of the attack and even secretly wishing for IS to seize the town. The international community was left with a similar impression. Kurdish anger boiled over with Erdogan’s Islahiye speech Oct. 7 when he said, “Here you go, Ain al-Arab, aka Kobani, is about to fall any moment now.”

History’s joke to Erdogan and his party lies here: Without the joint struggle of the United States and its new regional ally, the PYD, which ousted IS from Kobani, the Turkish tanks would have had no safe route to go and evacuate the tomb.