As Qatari and Egyptian media outlets engage in a bitter tug-of-war, diplomatic efforts continue at senior levels to tone down the rhetoric. 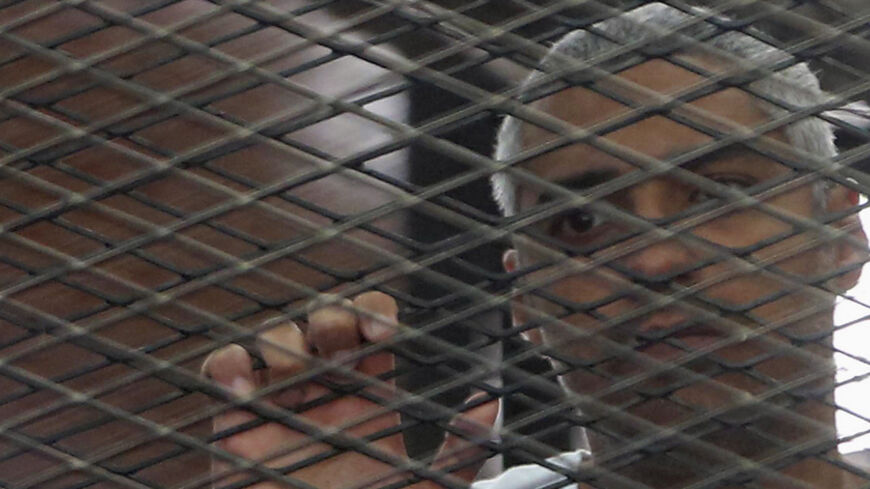 Al Jazeera journalist Mohamed Fahmy stands behind bars at a court in Cairo, May 15, 2014, after being detained in December 2013. - REUTERS

CAIRO — Practical steps were recently taken to reach a detente in Egyptian-Qatari relations, but the media have hampered those efforts.

In fact, in what seemed like a positive step, Qatar’s Emir Sheikh Tamim bin Hamad Al Thani met with Egyptian President Abdel Fattah al-Sisi over a friendly UN General Assembly lunch, in which Sisi issued statements regarding Qatar and Arab initiatives toward reconciliation.

Moreover, the two presidents exchanged holiday wishes on Eid al-Adha over the phone. However, the Egyptian and Qatari media are preventing this reconciliation from being fruitful. While the Al Jazeera broadcasting network is still waging a war against the Egyptian regime in favor of the Muslim Brotherhood, the Egyptian media is issuing its share of insults.

Sisi had warned Egyptian journalists, during a meeting with them, not to attack Gulf women — namely the mother of Qatar’s emir — and this wave subsided for a while. Egyptian TV programs had gone beyond limits in this regard. But several Egyptian journalists still insist on attacking Sheikha Mozah, as they believe this is the strongest response they can give to Sheikh Tamim’s continuing attacks on Egypt, by describing the popular revolution of June 30, 2013, as a military coup. Some Egyptian media have attacked Mozah in sarcastic ways, as they get into her personal life revealing several stories that harm her reputation. One journalist went as far as wishing her to get a disease and go bald.

Several Egyptian journalists who had met with Sisi in private, on the sidelines of the UN General Assembly meeting, asserted that the president had asked them not to insult Mozah, after telling them about his side talks with Qatar’s emir over the UN lunch.

According to journalist Emad el-Din Hussein, editor-in-chief of Al-Shorouk newspaper, who heard Sisi’s statements, Sisi apologized to Mozah for the insults by the Egyptian media.

“During the meeting, Sheikh Tamim approached Sisi and told him that Qatar wants Egypt to be strong. Sisi answered that he would like Sheikh Tamim to pass on his apologies to Mozah for all the criticism directed at her in the Egyptian media. Later, Sheikh Tamim reassured Sisi that the message was transmitted,” Hussein reported.

One could say that it was out of ethical obligation, far from the Qatari-Egyptian reconciliation initiatives, that Sisi addressed Egyptian journalists after his meeting with Tamim. Journalist Khaled Salah, editor-in-chief of Youm7 newspaper, noted that Sisi’s request was a moral one as he said, “There is no need for the media to attack anyone, as it would be irritating.”

The media has been interfering in diplomatic relations — whether positively or negatively, in Arab states, particularly in Egypt and Qatar — since the 1950s, according to Farouq Abu Zeid, a journalism professor and former dean of the faculty of journalism at Cairo University.

“The media has always been a tool in inter-Arab conflicts. I don’t think this is negative, but rather positive,” he told Al-Monitor. He added that this interference has prevented Arab states from turning their political conflicts, which escalated many times, into armed conflicts such as in Western European and Eastern Asian countries.

“The inter-Arab political conflicts have turned into a tug-of-war between newspapers and stations since the 1960s, and their hub was Lebanon. With the development of media technologies, the media constellation — especially satellite channels — set out to play the same roles in inter-Arab conflicts. This clearly appears in the Qatari-Egyptian crisis,” Abu Zeid stated.

Abu Zeid commented on the disobedience of Egyptian journalists’ regarding Sisi’s request to stop insulting Gulf women (Mozah), saying, “Regardless of the details, the Egyptian media is free, and the content of its outlets cannot be controlled. Besides, Al Jazeera at the other end is always launching vengeful and insulting comments. Is the Egyptian media expected to watch silently? Is it supposed to refrain from answering the repeated offenses of the Turkish president on every international occasion?”

Regarding the success of the current Arab mediations to patch up Egyptian-Qatari relations, Wahid Abdel Majid, a political expert and consultant at Al-Ahram Political and Strategic Studies Center, told Al-Monitor that he does not believe these diplomatic efforts will prove fruitful.

“For such diplomatic mediations to succeed, two factors should be in play: the objectivity factor and the skills of mediators. As the first factor is absent in the Qatari-Egyptian crisis, the issue won’t be a walk in the park for mediators,” he said.

“The meeting between the two presidents in New York at an international event happened in passing, and their greeting for one another was insignificant,” Abdel Majid added.

The media in both countries are not setting the stage for reconciliation. In that regard, he said, “The media is part of a country’s power.” He said Egyptian journalists’ violation of Sisi’s request for them to quit insulting Qatar does not indicate the Egyptian media is free.

“If a statement is made at a certain moment to express the degree of openness of Egyptian politics but is contradicted later, this does not mean that the Egyptian media is free. The Egyptian private and public media are biased and are strongly linked to the authorities that exploit the media scene to the last detail,” Majid said.