In an interview with Al-Monitor, Adnan al-Damiri, the Palestinian Authority security services spokesman, claims that the Israeli leadership chooses to ignore the tight security cooperation in the West Bank for political reasons. 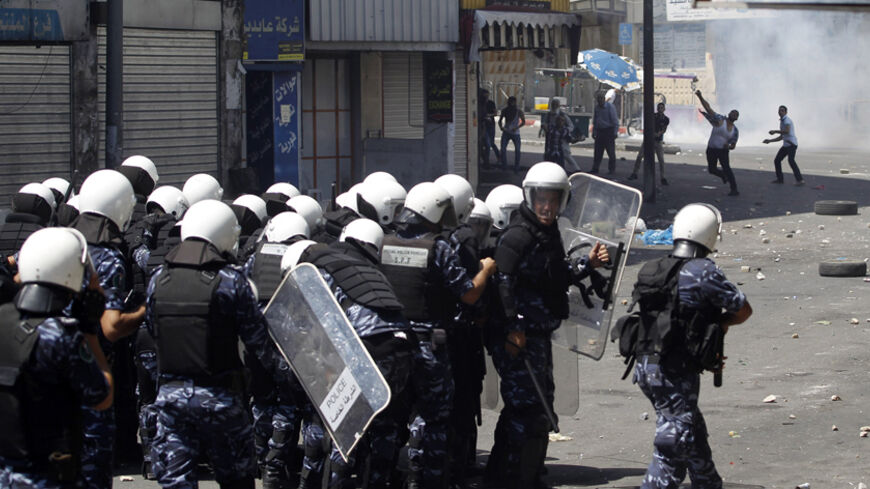 Palestinian riot police take position as they try to stop Palestinians from clashing with Israeli troops during a protest against the Israeli offensive in Gaza, in the West Bank City of Hebron, Aug. 22, 2014. - REUTERS/Mohamad Torokman

Unless Israel takes provocative measures in the coming days or weeks, especially in Jerusalem or at the Temple Mount, the Palestinian Authority (PA) is convinced that the wave of terror that has washed over Israel since October could likely end. Close and intense security cooperation has been fostered between the Palestinian security forces and the Shin Bet and Israel Defense Forces (IDF). As one senior Palestinian security official describes it, never before has security cooperation been as intense, elaborate and effective as it is today with the purpose of preventing and scuttling terrorist attacks from the West Bank.

It is feared that if West Bank Hamas militants or members of the Islamic Jihad military wing were to join the "Jerusalem intifada," unrest would spiral out of control. One terror attack would follow the next, and getting the genie back in the bottle would be a tall order.

Over the past two weeks, the West Bank security apparatus has arrested dozens of Hamas and Islamic Jihad militants, hoping to deter and isolate them and gather intelligence. The detainees are expected to remain in the PA detention facility until the security chiefs produce an evaluation and the atmosphere encouraging terror attacks against Israel has calmed.

Over the past few weeks, large demonstrations and rallies have been barred by the Palestinian police in PA areas. Its directive permitted only small marches to let off steam and show solidarity. Mass rallies that could result in confrontations were banned. When, for example, young Palestinians staged demonstrations close to an IDF roadblock near Ramallah, Palestinian policemen stood as a buffer between them and the IDF troops, thus averting violent clashes.

Despite feeling satisfied by signs that they have managed to curb terror attacks, Palestinian officials also feel a great anger toward the Israeli leadership, specifically Prime Minister Benjamin Netanyahu. It should be recalled that it was not long ago that the Israeli premier charged PA President Mahmoud Abbas with incitement and encouraging terror. The chairman of HaBayit HaYehudi, Economy and Trade Minister Naftali Bennett, took it a step further, alleging that Abbas is one of the greatest terrorists to have emerged from the Palestinian people.

According to a Palestinian security source who asked not to be named, the only glimmer of light that “maintains and preserves” the cooperation between Israel and the Palestinians is the good and reliable relations that have been developed with Shin Bet director Yoram Cohen. PA security officials were impressed by the fact that Cohen, in a bold and unprecedented move, contradicted the prime minister by telling the Knesset Foreign Affairs and Defense Committee on Nov. 18 that Abbas is not interested in terrorism and does not encourage it.

In fact, the PA president now finds himself between the devil and the deep blue sea. The security cooperation with Israel on one hand and the arrest of Palestinian militants in the West Bank on the other have not earned him many points with the Palestinian public. His opponents in the PA level slurs like “Zionist bootlicker” or “collaborator” at him. He is the object of vituperation and condemnation by the Israeli leadership.

So what, after all, drives Abbas to hold on to this cooperation, which he once described as a sacred value? Cohen provided a hint during that Knesset Foreign Affairs and Defense Committee meeting when he explained that Abbas knows that an intifada today in the West Bank would end his term.

Palestinian security sources who spoke to Al-Monitor on condition of anonymity emphatically reject this explanation. Abbas, they observe, opposes armed violence as a principle. During the second intifada, he was openly against the methods of PLO leader Yasser Arafat, and he does the same today, even facing a potentially heavy political price.

Meanwhile, as noted, Abbas has been able to head off violence from spreading to the West Bank. Gen. Adnan al-Damiri, the spokesman for the PA’s security services, told Al-Monitor in an interview, “Israeli security officials know full well what the situation on the ground is, who causes escalation and who brings calm.”

Al-Monitor:  Netanyahu believes that Mahmoud Abbas is to blame for this wave of terror.

Damiri:  Netanyahu uses propaganda for political purposes to maintain his right-wing government. He’s looking for a culprit in this escalation, when he, in fact, is the one to blame. Netanyahu, Bennett and [Foreign Minister Avigdor] Liberman simply stir provocation, but they know very well what’s happening on the ground and what’s been done.

Al-Monitor:  Do the attacks on Mahmoud Abbas by Israeli politicians compromise the security cooperation and affect the morale of the preventive security forces that carried out the massive arrests?

Damiri:  Let’s start with the fact that the security apparatus is not guided by political considerations. The preventive security forces do their job. We abide by the agreements and we are responsible for security. You need to know that Israel’s security forces are also familiar with the facts. By now, everyone knows and understands the motives of Israeli politicians.

Al-Monitor:  Do you think we can already talk about a lull on the ground? Is the wave of terror attacks behind us?

Damiri:  It depends on what Netanyahu’s government does. Look, Israel has started promoting racist legislation that is liable to stir agitation and elicit anger among Arab Israelis. This is also linked to what Israel will or will not do in Jerusalem. They’re talking about building a fence or a series of barricades to surround the Arab neighborhoods in Jerusalem. Will that calm the situation? No, it won’t. It will lead to escalation. So who promotes calm, and who encourages escalation? Who is the provocateur and who is being provoked?

Al-Monitor:  I’d like to ask you about the role of Hamas in the recent events. What has been its role in inciting the street?

Damiri:  In my estimate, Hamas, from an operational standpoint, can’t do anything significant in the West Bank. It simply can’t. Palestinian security forces have the West Bank fully under control.