In an interview with Al-Monitor, Adnan al-Damiri, the Palestinian Authority security services' spokesman, reacts to the Israeli decision revoking his VIP border pass. 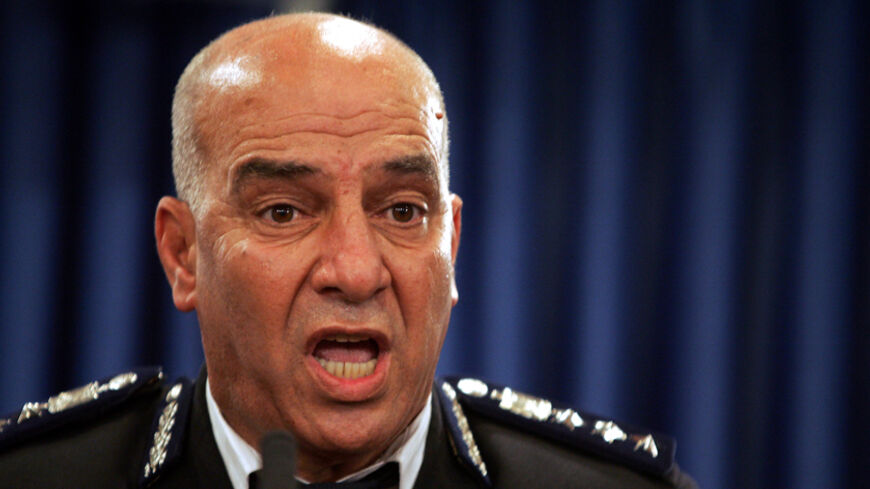 Adnan al-Damiri speaks during a news conference in Ramallah, May 31, 2009. - ABBAS MOMANI/AFP/Getty Images

Maj. Gen. Yoav "Poli" Mordechai, coordinator of government activities in the territories, decided Oct. 28 to revoke the VIP pass that Israel had given Gen. Adnan al-Damiri, the Palestinian Authority (PA) security services' spokesman. This pass, which Israel confers on high-level PA officials, enables them to enter Israel from the PA side.

It guarantees them a speedy, unimpeded entrance, bypassing inspections at the Israel Defense Forces (IDF) barriers scattered throughout the West Bank. Mordechai made his decision after Damiri’s statements in recent months against Israel’s policies in the territories and especially against Prime Minister Benjamin Netanyahu.

Damiri convened a news conference in Ramallah on Oct. 23 after the hit-and-run terror attack in Jerusalem in which two Israelis were killed. Damiri remonstrated against the killing by Israel of the driver Abdel Rahman al-Shaludi (according to Damiri), even before it had been proven beyond a doubt that Shaludi intended to kill Israelis. Furthermore, Damiri said that the Palestinian security services would sooner or later track down the people who sold their houses in Arab Jerusalem neighborhoods to right-wing activists. He emphasized that the sellers would not escape their punishment. But what really infuriated Israel was Damiri’s comparison of Netanyahu to Islamic State leader Abu Bakr al-Baghdadi.

Damiri’s position is parallel to that of an IDF spokesman. His position is considered a senior one, carrying much influence within the PA. By virtue of this position, Damiri enjoys access to all the security mechanisms' centers in the authority; he is also the one in charge of their coordination. Damiri’s position is particularly charged and sensitive, in light of the close security cooperation between the PA and Israel. This cooperation continues to exist despite the great tension between the sides, and despite that the very existence of the security cooperation is much criticized by Palestinian public opinion.

True, Mordechai’s decision to revoke the VIP pass from Damiri probably won't jeopardize continued cooperation between the sides. However, it did create tension and a crisis atmosphere in a period when cooperation is critical, in light of the violent incidents in Jerusalem and the concern that the violence will boil over and extend into the PA territories as well.

“Many people in Israel say worse things about Netanyahu than I did,” said Damiri in an interview with Al-Monitor, “but when the incumbent Israeli government is such an extreme right-wing one, they are not willing to tolerate even the kinds of statements made in press conferences.”

Al-Monitor:  You don’t think that your words were too scathing?

Al-Damiri:  No, not at all. Israel’s incumbent right-wing government commits racist acts against Palestinians in Jerusalem and in all of Palestine, and I said that these acts lead to escalation. That’s why I said that Netanyahu’s acts are no different than those of Abu Bakr al-Baghdadi, and that Israel has an Islamic State-like government.

Al-Monitor:  Were you surprised that the Israelis responded by revoking your pass?

Al-Monitor:  How did you find out that your pass had been revoked?

Al-Monitor:  Did you receive prior warnings?

Al-Damiri:  Yes, but I cannot remain silent in light of the acts that I see. The Israeli decision is mistaken and provocative, it is an escalation, but if someone thinks that this is the way to pressure us, he’s mistaken.

Al-Monitor:  Will revocation of the pass have any effect on security coordination?

Al-Damiri:  The security coordination is part of the Oslo Accord and it is not a security decision. The military leadership in the [PA] must carry out whatever the political leadership decides. Those of us in security do not decide policy, our job is to apply the law. Therefore, public opinion pressure is not supposed to influence us.

Al-Monitor:  Do the violent incidents in Jerusalem have an effect on the security coordination?

Al-Damiri:  I repeat, Israel is run by a radical right-wing government whose acts influence our lives and also affect the security coordination. This is a government that builds settlements and destroys homes; it executes a driver who was involved in a traffic accident [the hit-and-run driver in the East Jerusalem light rail incident], and two minutes after the incident it announces that it was a terror act. The Palestinian nation is sick and tired of our pleasant behavior toward the Israelis. That’s why the Palestinian leadership decided to go to the UN. There is no one to talk to in Israel’s extreme right-wing government, and nothing to talk about with them.

Al-Monitor:  In your estimation, do you think we are facing a third intifada?

Al-Damiri:  In my opinion, the Palestinian nation will not sit by quietly; instead, it will find all kinds of ways to respond. For example, look at how many Palestinians were killed since the beginning of the year and how many olive trees were maliciously uprooted by the settlers. From the beginning of 2014, nine Palestinian children were killed and eight mosques were torched. No one was brought to trial over these deeds. No one settled accounts with the settlers who cut down thousands of olive trees belonging to Palestinians. How can we explain to the Palestinian nation that this is a government that wants peace and that has chosen the route of peace? I repeat and say, what we witness today is a government that I can’t help but describe it as a clone of Islamic State.

Al-Monitor:  These are exactly the words that infuriated the Israelis and led to the sanctions against you.

Al-Damiri:  True, but Maj. Gen. Mordechai is only the one who executes the government’s decisions. The one who gave this order was Benjamin Netanyahu, who is incapable of accepting criticism.

Response of the Coordinator of Government Activities in the Territories:

Damiri’s statements bordered on incitement and, as a result, Maj. Gen. Mordechai decided to revoke the pass he carries. Furthermore, it was notified that a warning was delivered to Damiri a few months ago via sources in the authority, that he must halt his scathing statements. Damiri did not heed the warnings and the low point was, as aforesaid, at the press conference last week in Ramallah.