Given President Recep Tayyip Erdogan's constant blaming of the West, the Kurds and other targets of convenience, it's unlikely that the Turkish public can ever reach a broad consensus on how to solve Turkey's problems. 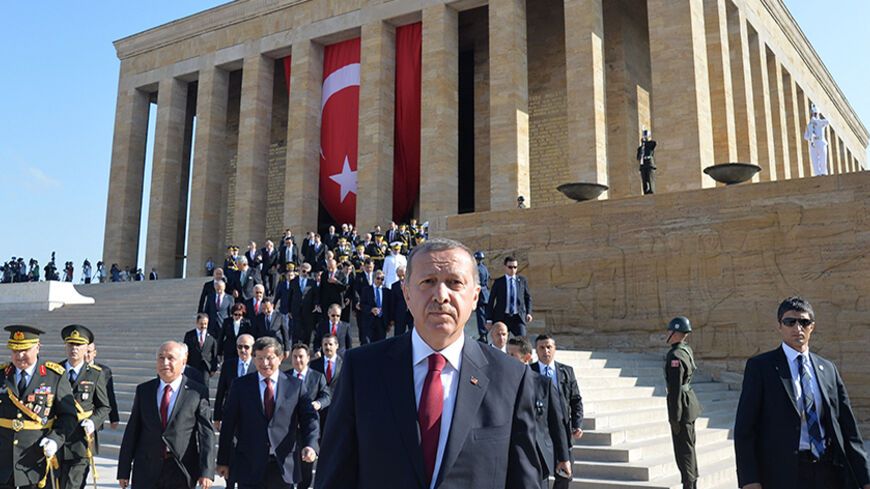 Turkish President Recep Tayyip Erdogan often talks about history to make his point on present-day developments. He did so again Oct. 13 in a speech in Istanbul focusing on the era of World War I. And just as he always does in evaluating any troublesome event, he blamed foreign meddling for all the bloodbaths in the Middle East, pointing as proof to Lawrence of Arabia, who helped organize an effective Arab revolt against the Ottomans.

“There were spies in the Arab deserts to destroy the Ottomans. Spies are at work today, too,” Erdogan said. “There are today, unfortunately, volunteer Lawrences. Today’s Lawrences are members of their own societies. They are disguised as religious men, servicemen, journalists, authors and, more important, terrorists who emerge as new Lawrences trying to set our region on fire. There are, unfortunately, new Lawrences applying the stipulations of the Sykes-Picot agreement in Turkey and our near geography, hiding behind promises of service, freedom of thought and media, a war of independence or jihad.”

Throughout his speech, Erdogan kept on painting the Kurdistan Workers Party (PKK) and US-based Turkish Sunni cleric Fethullah Gulen and his followers as pawns of imperialistic powers, and therefore fitting the description of today’s Lawrences shouldering this legendary British spy’s mission today trying to weaken Turkey. “Each conflict in this region was designed a century ago,” when the borders of the Middle East were redrawn after World War I, Erdogan said. “It is our duty to stop this.”

On Oct. 12, Erdogan slammed the PKK and the pro-Kurdish People’s Democracy Party (HDP), saying, “We don’t have any business with those taking orders from a terror organization.” That was a reaction to the Kurds’ Kobani protests across the country that left behind 40 dead.

Erdogan has pursued three themes in rallying the people since he came to power over a decade ago: Blame the foreigners for all things that go wrong; focus on the wrongs of the republic’s history; and bring forward religion as the unifying source of the people. Is this, however, the right tactic to strengthen the unity of the nation?

Murat Akincilar, a Diyarbakir-based analyst specializing in the Kurdish issue, suggests the opposite: “I believe when the president says they don’t have any business with those who take orders from a terror organization, he is basically talking to those whose nationalistic pulse has climaxed due to the recent events,” Akincilar told Al-Monitor. “Erdogan and his team still see [the imprisoned PKK leader Abdullah] Ocalan as something different than being solely a terror organization leader. They are able to make these critical distinctions. I don’t believe they are that narrow-sighted.”

Sah Ismail Bedirhanogullari, a Diyarbakir-based businessman who played a key role in shaping the peace talks and whose family is one of the first Kurdish tribes that revolted against the Ottomans, agrees. “What is being said often contradicts with what is being done,” Bedirhanogullari told Al-Monitor. “The ruling party members talk once or twice at the least every week with the members of the HDP. More important, they engage with Ocalan on a regular basis. They even asked for his help to calm the streets. Otherwise, how could Ocalan be able to send a letter to the HDP co-chairs to be read to the public?”

Turkish Defense Minister Ismet Yilmaz assures the public that in case an Islamic State (IS) attack takes place on the Turkish homeland, NATO will consider it an attack against the alliance and do everything necessary to protect Turkey. Moreover, the Turkish parliament approved the government authorization to allow the deployment of foreign troops on Turkish soil as part of taking a role in the US-led coalition of the willing against IS.

Yet, the Turkish leadership from the top down continues to depict the Western alliance as the core problem of all things that go wrong in the country or in the region. It is as if the Arab tribes from a century ago had no problems with the Ottomans, or that the PKK might not have any reason to take up arms or that the Turkish government’s Syria policy did not contribute in any way to the rise of IS, but that it is all about the meddling of imperialistic powers. Turkish leaders' constantly denial that they share responsibility for what goes wrong may be a tool to manage the crowds, but is it a righteous and a fair approach?

More problematically, Turks today are starting to wonder whether they should feel proud or ashamed of their republic’s founding principles. They have been advised for over a decade that the answer is a pure negative. Erdogan instead proposed that people unite around their religious identity; however, that also emerged as a divisive issue due to a strong belief that mixing religion and politics is a recipe for disaster for societal peace and harmony. With all that negative messaging, one should not expect a robust union that can resolve its critical issues, whether on religious or Kurdish matters, or for it to really take a leading role in the region to provide peace and security.